The first thing you notice when you walk from the parking lot towards the entrance of Granville’s Gourmet Ribs & BBQ is the big black portable smoker in front of the building.
Evidently, that’s were they smoke their meats, which is kind of an odd thing for a BBQ restaurant. Most other places have a dedicated pit in the back of the building, or some oven inside. But from the looks of it, and from where it is located at the street-side of an old Strip Mall, you can certainly imagine that the building was never designed as a BBQ place - dry cleaner would be my guess. So they had to come up with a way to cook at least their meats, plus another part of their business is catering, hence the portable smoker on a trailer. It’s kind of the old two birds with one stone story here.
Also kinda odd is that in a place like this, with wallpaper that is ripped down in places, chairs that display the remnants of the whole menu on their seats, with three rather garish paintings on one wall, and some randomly distributed flat screen TVs on the other walls, the food is actually served on real china plates with real metal silverware. And it is also brought to your table, and the dirty plates are cleaned off afterwards by the staff, too. Nice touch, adds a bit of classy-sassy to the place.
Not so classy was that the credit card machine was broken, that the Coke machine was out of Sprite and Root Beer, and that they were also out of a few of the side dishes on the menu. That’s gotta be costing them major style points, regardless of the real nice and friendly staff. Well, I keep talking about the staff here, but actually there were only two people behind the counter, a cook and the waitress.
But that’s all right, because the place is not really big, it seats maybe thirty people comfortably, so I guess these two can handle it pretty well.
As usual, I had a large pork plate, with slaw and the fabled baked potato salad as sides. You also get a piece of griddle cake, and all together it is really a lot of food, and especially a lot of meat, for eleven bucks, with a drink.
And the meat is not only plentiful, but actually quite good. It has a phenomenally smoked flavor to it, one of the best I ever had. My portion came with a lot of bark, which added tremendously to the taste. Quite frankly, there is no sauced needed to enhance the sensory pleasure, the meat alone, which is very tender and very juicy, is delightful enough.
The few rather minor slabs of fat that I detected and removed from the meat did not dampen my pleasure.
That was reserved to the rest of the meal. The griddle cake was akin to a piece of cardboard, the slaw was absolutely tasteless, the potato salad, of which I had heard so many good things before, was actually a quite moldy tasting affair, and the BBQ sauce, which you can buy by the pint at the counter to take home with you, was just glorified ketchup with a faint hint of some additional spices in it.
Good thing that the meat was such a heap, or I would have stayed hungry, because after a taste of those things, I could not bring it over myself to touch them anymore. So, for the meat I would come here every time, but only for that. Obviously, the cook knows how to operate his smoker, but for the rest … let’s just weave a veil of silence to cover it, shall we?! 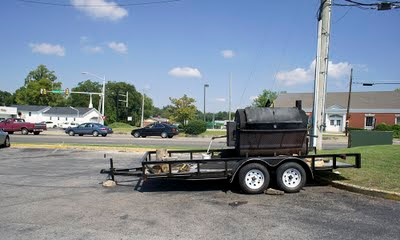 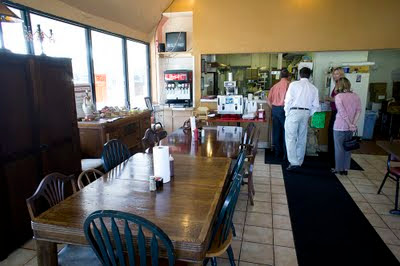 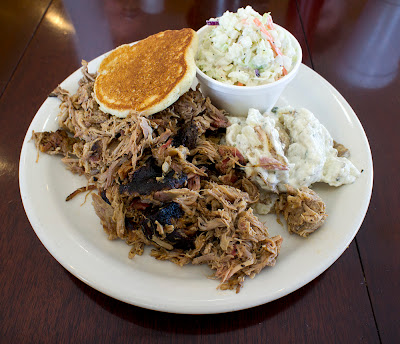