Orlando, Florida
During my occasional travels, I try to sample BBQ at those near and far away places outside the Quest area. I just really, really like that stuff ...
What exactly is this “Texas Style” that so many places carry in their name? Is it the fact that you order at a counter where the meat is prepared before your very eyes? Or is it the different wood that they use to smoke the meat? Or is it the sauces that are different from what we have here in the BBQ Belt? Is it all of the above?
Or maybe it’s just the posters of dudes in Cowboy hats on the walls. I don’t know, but I will find out next month when I will be on ravel to Dallas.
But right now, I have to be content with “Texas Style” places outside of that great state, in this case namely Cecil’s Texas Style Bar-B-Q in Orlando, Florida.
Which is a nice clean and somber classical restaurant, with wooden furniture split half and half between four-person tables and four-person booths, a few Texas-oriented pictures, posters and mementos on the walls, and an overall no-frills atmosphere to it.
You order at a counter and the meat is prepared before your very eyes. Then the plastic plate is handed to you and you go around a corner to the buffet with the sides. They have beans, beans, and some more beans there, in different varieties. You put two sides on your plate and proceed to the cashier, get your drink out of the soda machine, and then go to an island in the middle of the dining room where you will find the sauces, condiments, pickles, onion rings and the like.
Cecil’s is only the second place in Orlando where I found pulled pork, so I got that, and chose BBQ beans and some strange potato-casserole like thing as sides. A slice of the usual Texas toast comes with the meal, too.
Apparently, they know how to smoke pork in Texas – it was very tender and juicy, with a nicely pronounced smoke flavor, and surely well within the acceptable standards. Nothing really spectacular, though, just plain good ol’ pulled pork.
You have the choice between three sauces, and here is where the trouble begins. The sweet sauce is a notch better than pure ketchup, the mild sauce has the color of charcoal and tastes like burnt chicory, whereas the hot sauce is more bitter than spicy. A cup of the sweet sauce with just a few drops of the hot sauce generates an acceptable mixture, but quite frankly the sauces are not the strong point of this joint.
This can also be stated for the sides I had. The BBQ beans were nothing special, maybe a bit too much on the sweet side, but this potato-casserole thing was downright blah. Half-cooked potatoes with onion rings, all covered with American cheese – and it tasted like cardboard. So, still no sighting of potato salad in Orlando.
The Texas toast on the other hand was not too bad, but then again, what can possibly go wrong here?
One nice touch is that with each in-house dinner comes a free ice cream cone. The machine they have for this is a rather picturesque apparatus but the vanilla ice cream that comes out of it tastes very good.
For just under fourteen bucks, which seems to be a standard Orlando price tag for BBQ, including a drink and an ice cream cone, the meal was not a bad deal. The highlight was certainly the meat, followed by the ice cream as dessert, and it is a nice non-fancy restaurant. All in all, an acceptable dining experience with okay food, but I am clearly anxious to see how they do it in Texas proper. 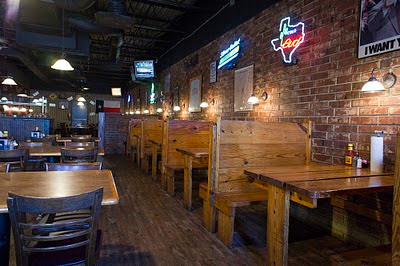 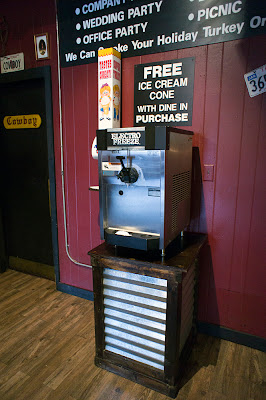 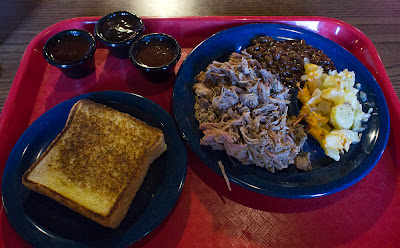