What to do, if there is no time to go out and fetch some BBQ at one of the numerous places around here, but the cravings must still be satisfied?
Well, just reach into the freezer and put the two pound tray of frozen Jack Daniel’s Seasoned and Cooked White Meat Pulled Chicken with Jack Daniel’s Barbecue Sauce into the microwave.
Put some buns on the table while it is heated, and throw some cabbage and carrots into the blender. Et voila, a homemade BBQ meal is fixed in minutes.
Well, we did that tonight for the first time, just to try if this would be a viable alternative to getting into the car and driving to the next BBQ place, which is about two minutes away, if I am really hungry.
Suffice to say, the cole slaw my wife made from scratch was the best part of our dinner. With fresh cabbage and carrots, shreddered finely and dressed with vinegar, oil, salt and pepper, it was a delight. I would have been content with only that on the bun, to be honest.
But we also had heated the Jack Daniel’s pulled chicken now, so that had to go on the bun, too. There is a lot of Jack Daniel’s BBQ sauce on the chicken, which is surprisingly tender and of very good quality. The sauce is supposedly made with real Jack Daniel’s Whiskey, but the influence on the taste is rather minimal. I would have preferred to have the sauce in a separate pouch, instead of the meat being drowned in it.
Don’t get me wrong, I absolutely love Jack Daniel’s Whiskey, also like their mustards very much – but the BBQ sauce is merely okay. Too much on the sweet side, and also the ingredients list has “Silicon Dioxide” on it. Normally, they make glass windows out this stuff, but it is also used as flow agent in foods. Thanks, but no thanks, you can keep your weird chemicals to yourself.
So, I guess next time when the cravings come, I will throw over some clean pants, saddle my Nissan, and fetch something dioxide-free from the next best BBQ place here. I admit, I just like that whole health food thing. 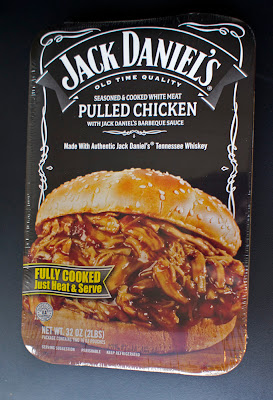 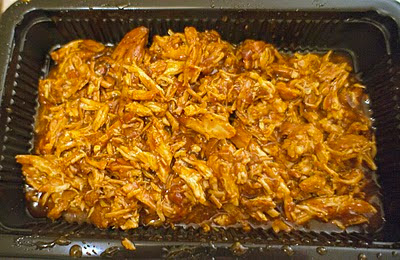 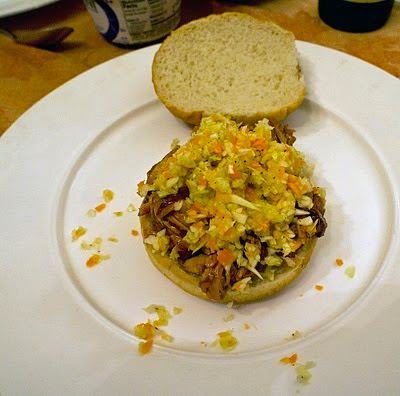