Although Lawler’s is a small chain with currently five locations in Northern Alabama (a sixth place is already in the making, near the new Madison Hospital), those restaurants are not the same. Some are quite sober, functional eateries, while others are outfitted in a special way, with attention to detail and a whimsical touch. Like the one in Athens on Highway 72, were they have an actual rowing boat on the ceiling, and some nice display cases with fishing paraphernalia on the walls. The restaurant has about half a dozen booths on the side walls, and some tables in the center. You order at a window in the back and while you wait for it to be prepared, you may seat yourself on one of the two park banks there.
Adding to that homey and welcoming atmosphere is the staff, which is very friendly and responsive.

This is the fourth Lawler’s I’ve been in, and so far it was the one with the best atmosphere. There is not much difference in the food between the locations, which is understandable because the meat is usually prepared at a central place up in Tennessee and then driven the few miles to the satellite stations in North Alabama each morning. Although, this place in Athens has a smoking facility outside of the restaurant, so I wonder if maybe they shifted the whole meat preparing operation a bit south now.

Anyway, as usual when visiting another location of a chain, I tried something else then the pulled pork plate with slaw and potato salad. This time I opted for the half chicken plate with baked beans and potato salad.
Well, the chicken was very tender and succulent, but I could not detect a very prominent smoke aroma. But with the white sauce on it – Bang! Absolutely great! I dare to say that with a distinctive smoky flavor on the chicken, it would have not harmonized as well with the sauce.
The baked beans were superb, too, not too sweet and without any cinnamon. The potato salad I already had before and I still like it very much. It is predominately on the sour side, and rich and creamy.

So, if I had to choose from one of the many Lawler’s locations here in the Tennessee Valley, the one on Highway 72 in Athens would be my favorite. It looks and feels like a good old BBQ place (only without the dead flies on the window sills …), the food is always very good, and the prices (under ten Dollars for the plate and a drink) are certainly acceptable. So what if they don’t smoke the meat exactly were they sell it – as long as it is not frozen and then put in the microwave, I don’t have any problem with it. 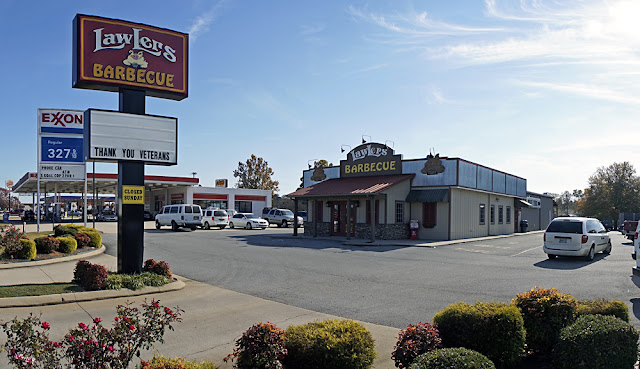 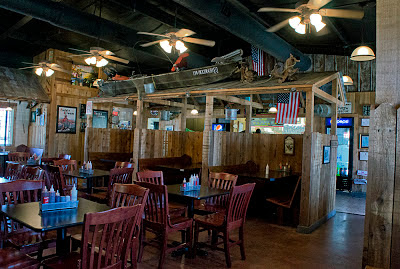 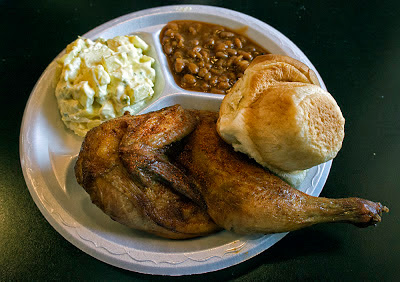