When I started this quest, I originally had a little over 60 BBQ places on my list. My goal back then, two years ago, was to visit half of it.
Now, I have visited 60 restaurants here in the quest area, and 44 outside of this area, and I spent almost $1500 on it. That makes for a lot of red meat in the past two years - and for a lot of fun and great stories.
There are only a handful of places left here on my list - and I truly believe that I have assembled an utmost comprehensive list of BBQs in the Counties of Madison, Limestone, Morgan, and Lawrence. There are two reasons, why those few are still on the list - I have only limited time to do this, basically only every other Friday, and some of the places are more than an hour's drive from where I live; and secondly, I have shied away from some of those, because judging from the outside, they seemed not desirable to visit for me.
But let's see what the future brings -  my goal for the new year is to cross out every entry on my list ...

Oh, and I have found a new quest, too. The newspaper blog AL.com ran an article about 22 Greasy Spoon Burger Joints you have to visit before you die (http://www.al.com/living/index.ssf/2013/11/22_greasy-spoon_burger_joints.html)  ... I read that article and discovered that half a dozen or so are in my neighborhood. So, while I do not intend to work through the whole list, those that are in reach are absolutely something I need to visit. And write about my experience, of course: http://greasyspoonsinbama.blogspot.com/
Posted by BBQ in Bama at 11:21 PM 4 comments:

My experience after now three years of working on the Quest is that BBQ places in North Alabama are on average better than anywhere else I go. Once in a while you find a jewel also in other areas, but they are few and far between. Because my job involves frequent trips to Orlando, I had the opportunity to try many BBQ restaurants there over the years. I found many that are easy to forget, and only two that are up to par with the best ones at home - Yellow Dog Eats in Windermere, and Bubbalou’s Bodacious Bar-B-Que in Orlando. Today, this short list received a new entrance - Larry & Harry's Bar-B-Que in Winter Garden.

A hole in a wall – seldomly has this expression described the actual situation better than with Harry & Larry’s. Winter Garden is a town of about 35000 people some fifteen miles northwest of Orlando. The historic downtown has been beautifully restored and today contains an assortment of restaurants, shops, and cafés, a couple of museums and a performing arts venue. And, of course, a BBQ place, which you might miss driving by, because it is hidden behind a big old tree that covers almost the entire front. Immediately after you enter the place, you stand in front of a counter where you exchange your money for a card out of a poker deck that is sitting in a metal base. This you carry to your table and place it there, so that the server can identify who gets what. The dining room itself is a long narrow tube with five simple red wooden booths on each side. The decoration consists of several old signs for food and drink products from an era long gone, a large print of the place’s name, and some odd wooden birds. It is one the most cozy atmospheres I ever found in a BBQ place. Also, the staff is extremely friendly and nice, and if you want to, you can even sit outside on the boardwalk on a couple of iron garden tables and eat your Q.

Although it was 86 degrees in the middle of December, I chose to dine inside. As usual, I had the pork plate, which came with two sides – baked beans and fries in my case – and a slice of Texas toast. Unfortunately, they did not have potato salad, but I do not hold that against them, because nobody is perfect.
Nevertheless, the baked beans were almost perfect. There were two kinds of beans in it, Pinto and Red Kidney, with a good helping of smoked meat. Top notch. Very savory - maybe a bit more sweetness could have improved the taste - and with a smoke aroma you would not believe. That of course came directly from the meat – the pulled pork had a very distinctive smoke aroma, a perfect pink ring and an intensive BBQ taste straight out of the BBQ bible. Marvelous. The pork was pulled, but came in big chunky pieces, and I had a lot of very tasty bark on it. It was very tender and juicy, without being mushy. Unfortunately I also found a few pieces of fat, but due to the coarse cut of the meat, it was easy to spot and remove them. A little bit more diligence when pulling the meat would have prevented that.
They have five sauces there, of which four are of the thick red variety, in different stages of hotness. Nothing special there. But the fifth sauce is something else. It is mustard based and has just the right spiciness to make your mouth tingle when eaten on the Texas toast. Together with the smoked pork it is just BBQ heaven.
All this wonderful food has its price, though – over thirteen bucks for the plate with a fountain drink is not cheap. But it was surely worth every cent. 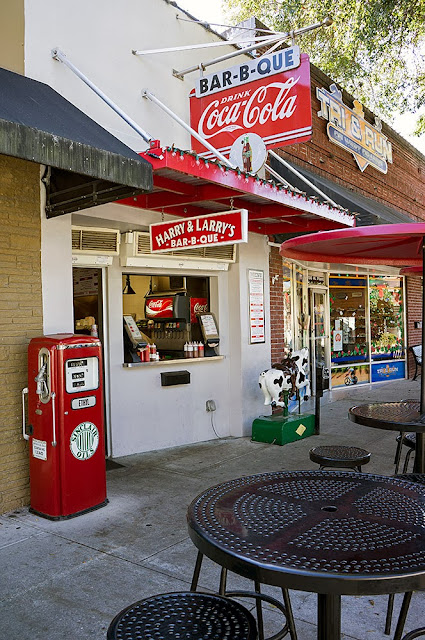 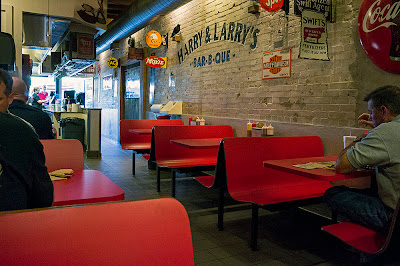 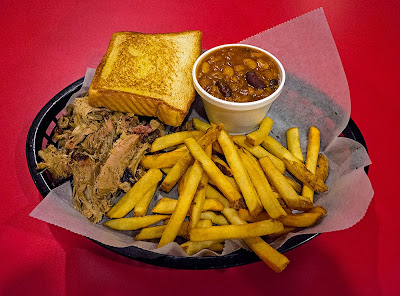 As the saying goes, never judge a book by its cover. I usually never do that, always checking at least the describing text on the book jacket. Or, in the case of BBQ joints outside the BBQ Belt, I try to find their menu on the internet to check if it is worth my time. I also get an overview on the reviews that other people posted. And that is an especially good tactic in a place like Orlando, Florida, where you very easily can end up in some kind of tourist trap if you haven't done your homework.

And that is why, before I committed myself to the Cave Inn BBQ in Winter Garden, just a few miles outside of Orlando, I checked the menu on their website - and found all those familiar items on it like pulled pork, ribs, and brisket. Well, classic case of false labeling here. When I ordered the BBQ MMMEAT Sandwich, which consists of pulled pork, beef, sweet'n'spicy sauce, and red cabbage slaw on a pita bread, the friendly server alerted me to the fact that they do not smoke their meats, but grill them because "it just tastes better". They also smother them with sauce to "keep in the juices". Excellent. That's how you do ... well, if you do it this way, please don't call it BBQ, that is just plain sacrilegious.

So, this sandwich has basically the same right or reason to call itself BBQ, as I have to call myself King of the Tennessee Valley. Moreover, the sauce it was smothered with totally overwhelmed almost any other aroma that might have been present. Only the marinated red cabbage slaw had a chance to being noticed, the meat could have been cardboard, it would not have made any difference. Also, while the pork was reasonably tender, the beef was quite chewy. Smoking it for a few hours might have helped with that. And then, and only then, you might call it BBQ. And charge 13 bucks for it, with a drink and a side of fries. Oh, and over all this rant about the food, I kinda forgot to mention the actually very nice atmosphere there, the dinosaur themed decoration, and the very friendly and helpful staff. They also have live music there regularly and a very cozy bar area. What they do not have is BBQ. Except in their name. What a shame. 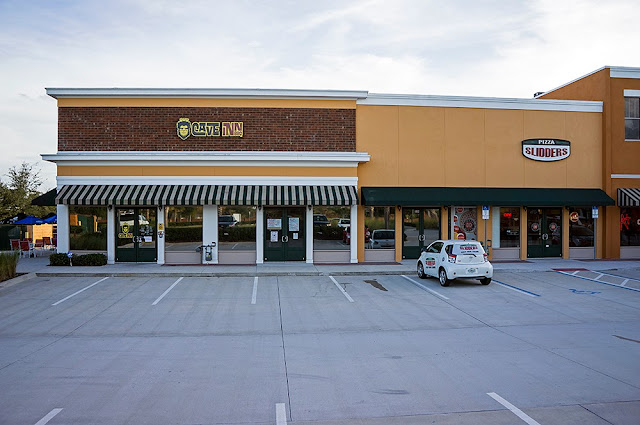 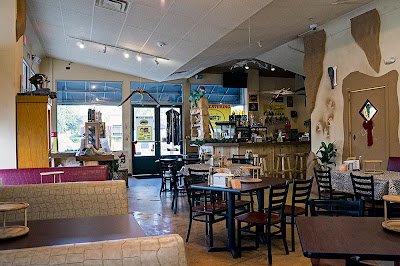 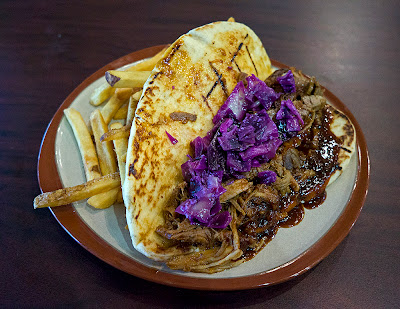