At lunch time, the line of customers stretches the whole length of the entrance way, which is a good 30 feet long. It is always a good sign, if the locals seem to like a place.
Fortunately, I was there right at when they opened the place. before that tidal wave hit.
The restaurant is located in one of those typical strip malls at a busy street that you can find in every American city. Right next to it is a Waffle House, which may serve as a beacon to Dave Poe’s BBQ, because you have to look kind of hard to find it driving by.
It is not even a small place, with maybe twenty tables and booths for four customers each, but there are no flashy signs, no advertisements, and the like to alert you that you are about to pass BBQ heaven. There is only the name of the place in big letters at the front, and it also says “Wood Pit Barbecue” near the top of the building.

And the sign does not lie. To jump ahead to the main reason to go there, the pulled pork I had definitely came out of the wood pit. It had a marvelous smoky flavor, it was tender and even came with some very crunchy bark. Hands down, one of the best pork I’ve ever had. Needless to say, that it was also very tender and juicy. At first, I thought it to be a shame to pour sauce over it – until I took a taste of it. Heaven. Well rounded, thick and red, clearly vinegar based but also tangy and a little sweet. Perfection in a refillable plastic bottle. The potato salad was superb, too. Only the cole slaw was a bit too watery for my taste – some more salt and pepper and maybe even some more vinegar would make it more to my liking. The pulled pork plate came with two slices of pickle and a Texas toast, which I drenched in the heavenly sauce after everything else was gone and basically used as dessert to that really splendid meal. For all that, plus a cup of unsweet tea, I paid about fourteen bucks, which falls in line with the price level in the greater Atlanta area, I guess. It was worth every penny, though.

As for the atmosphere there – very clean, very bright and very straight forward. I wouldn’t call the interior “modern”, and it certainly is not the coziest place you can imagine, but I liked the college sports decorations, including the long line of trophies at one wall, the old license plates on another wall, and the wooden floor and walls overall. A special shout out goes to the Bama sign (RollTide!) next to the UGA sign at the counter! It surprised me a little bit to find those two arch rivals next to each other, because clearly this neck of the woods is UGA country. I failed to ask Mr. Poe, who personally took my order, for the significance of the two signs. Well, I was hungry at the time and had to catch a flight later that day. But whenever I return, this will most certainly on my bucket list of things to do. 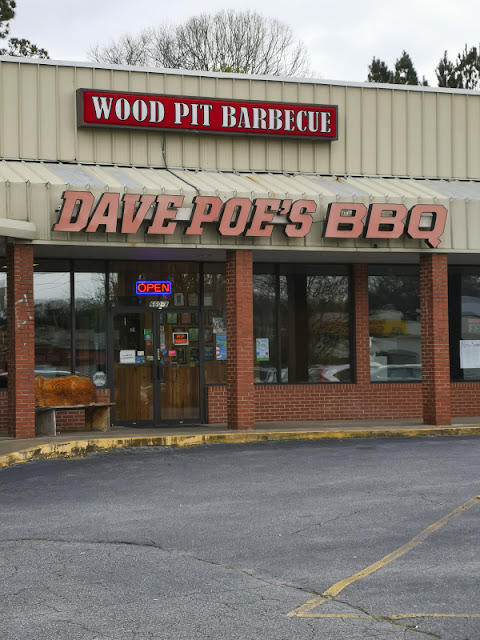 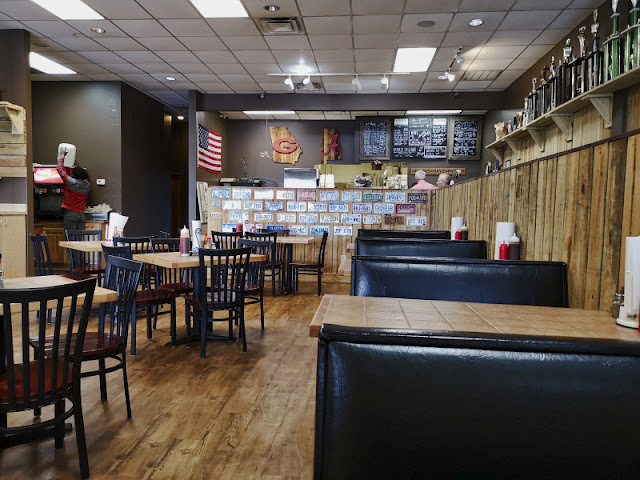 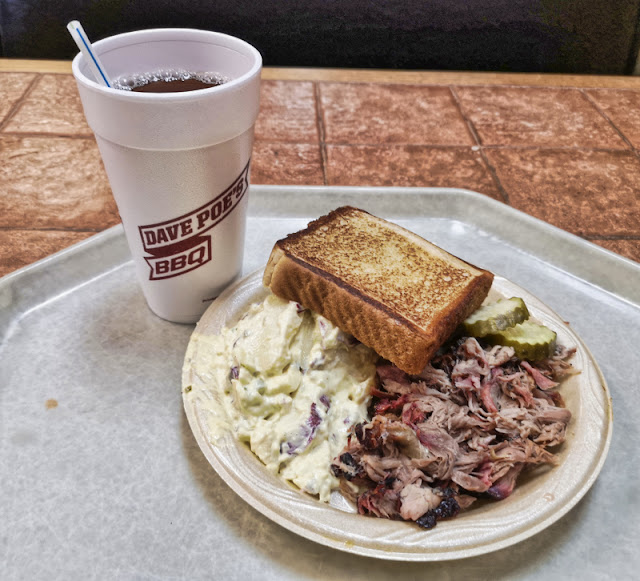 Christmas Lights. It is March, and there are Christmas lights all over the place. Not those garish red and green ones, but the slightly less annoying white LED chains. Outside at the building, and inside surrounding the booths and the tables. I decided to think of it as unique and quirky – but seriously folks, I know you are from Bama, where this would qualify as “normal”, but now you live in a somewhat more sophisticated place near the big, big city of Atlanta, so is this really necessary?
The rest of this restaurant looks like a pretty standard family eatery. They got booths and tables, it is very clean and sparsely decorated, the interior is made of wood and it really looks and feels like a very charming and cozy place.
There is also an open pit in the middle of the restaurant, where you can watch how the meat is smoked. This also has the great effect, that you smell it all over the place. Very nice atmosphere there, and also a very friendly staff.

That said, lets get to the food. As usual, I had the pork plate, which came with a Texas toast and two sides. In must say, for all the show with the open pit and all, the meat was somewhat disappointing. Yes, it was tender and juicy, but it lacked any wood smoke flavor entirely. It was bland. But it served well as a basis for the superb sauce. A thick red mélange with a little kick to it, the sauce is undoubtedly the star of this place. The sides were also outstanding – both the cole slaw and the potato salad were savory and with the right amount of tartness.

With an unsweet tea I paid almost sixteen Bucks, which is a bit steep in my book for the quality and quantity that was served. Big city prices, I guess. 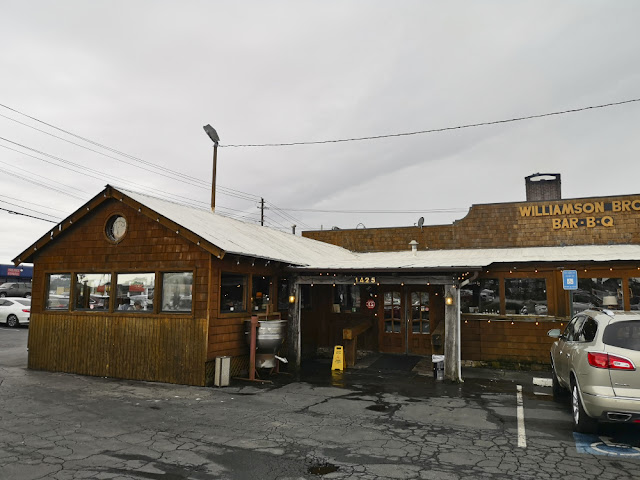 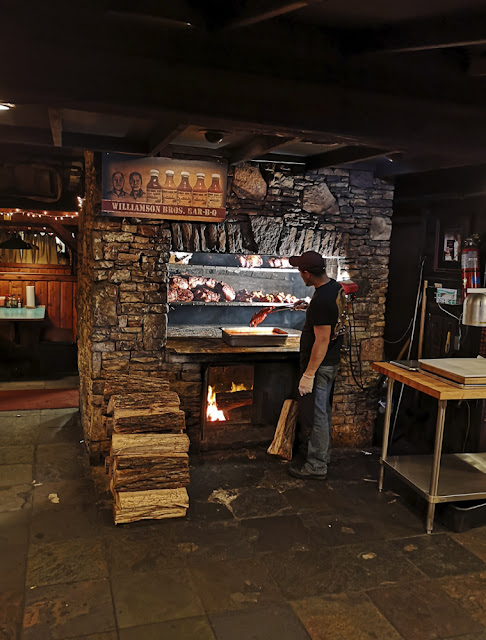 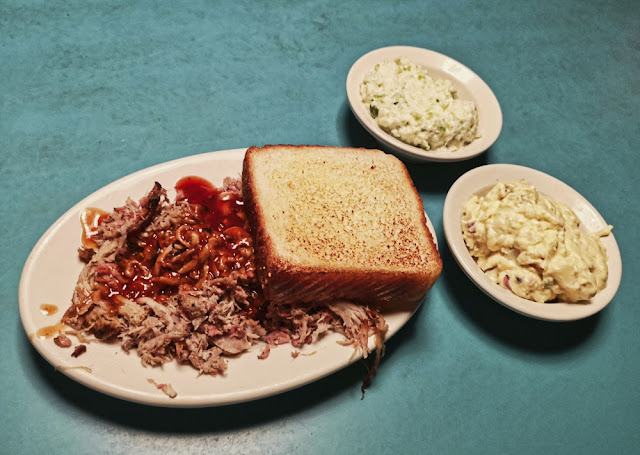 It's been five years now that I left Alabama and settled back into Germany.
Five long years almost without BBQ. We actually have one place here in Germany that does BBQ right - alas, it is in Nuremberg, which is a four hour drive from where I live now.
I've been there a couple of times, but didn't think it to be worthwhile wrinting about it. After all, it is not the Great Northern Alabama BBQ Quest anymore, it is merely a side show.
But then I was assigned to a new job last year, which will bring me back to the USA occasionally on business trips.So I thought, what the heck, reopen that blog and record the experiences made in those different locations.
It will not be a regularly maintained blog anymore, because of the sparse opportunities I get to sample BBQ these days. But once in a while, there will be new content. So check back on a yearly basis ... :)
Posted by BBQ in Bama at 11:05 AM No comments: