The Tampa Bay Rays are playing very good Baseball this year. They are locked with the Boston Red Sox in a death-match for the first place in the American League East Division. Their home games are played in a domed stadium, Tropicana Field in St.Petersburg, which has a genuine BBQ restaurant in the food court. Everglades BBQ Smokehouse is surprisingly not part of a bigger chain, but seems to be a one of a kind place that you only find at Tropicana Field. They claim to smoke their meats there fresh every (game) day, which is certainly commendable.

Well, I am certainly aware of the limitations a stadium eatery has to overcome. Cramped space, fast service, hungry masses, rent versus profit margin, and so on. So you have to cut some corners, I get that. But $9.50 for a Pulled Pork Sandwich, with only one side (slaw)? And the only other choice is BBQ Nachos (also $9.50)?! Come on!
So together with a regular sized drink, I paid $14.50 – and felt robbed. If that would have been the best BBQ sandwich ever, a revelation, nectar of the Gods, the sandwich to rule all other sandwiches, then maybe the price would not have stuck in my throat while eating it. But it wasn’t. Actually, it was only a subpar BBQ sandwich.
The pork itself was not too bad, it was tender, although a bit dry, and did not have any discernible smoke taste. That is the typical description of the strategy “Our pork does not need to have its own flavor - that is provided by the sauce”. So, they have three different sauces: Smoky Original, Carolina Gold, and Citrus Chipotle. I only tried the original concoction, which is your typical thick red sweet’n’spicy affair. Nothing you couldn’t get at any given supermarket. I had pork sandwiches that came with slaw on it, pickles, two different kinds of sauce, and maybe even an onion ring – for less than half of the price I paid for this very basic one here.
I probably could have poured the slaw over the pork, but I refrained from that because it was more of a vegetable salad then a typical slaw. Yes, there was some cabbage, but also carrots, peppers, celery, and other stuff. It tasted very sour, which I liked, but not at all like a classical slaw.

So, to sum it up – next time I watch a Tampa Bay Rays game there, I am gonna stick with the hot dogs and the burgers. 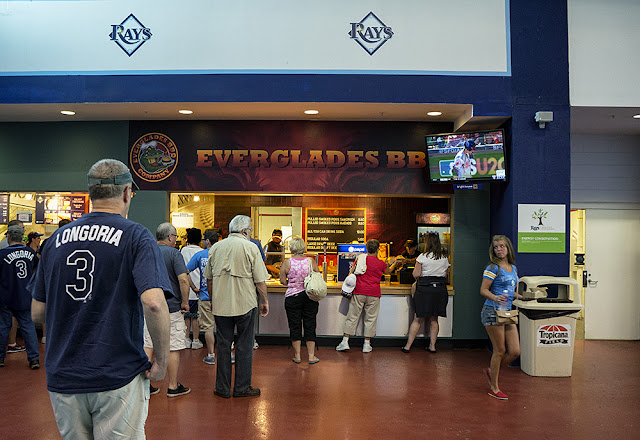 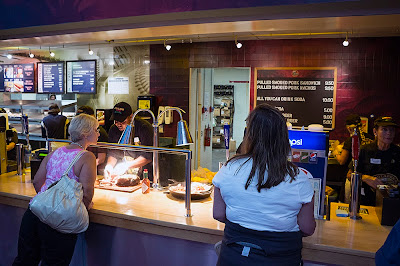 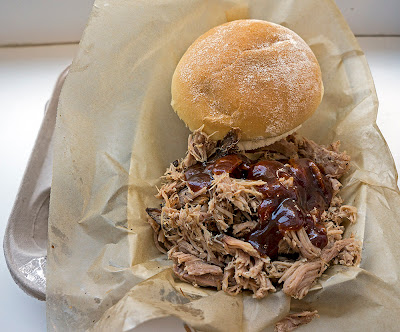