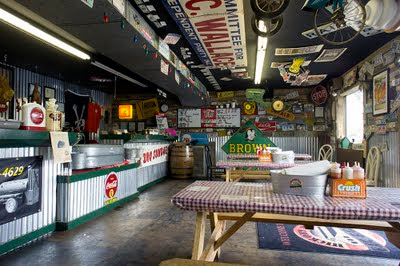 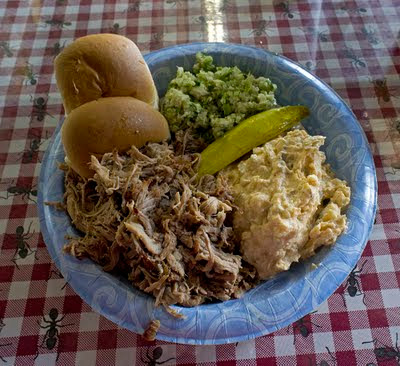 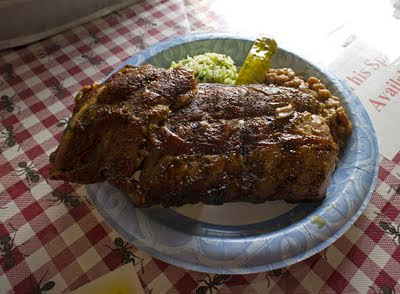 
There is one philosophical question I am pondering now for quite a while - do dead flies on window sills contribute to the authenticity of a BBQ place?
They certainly have a negative effect on overall cleanliness of a place, but is this merely disgusting or is it rather oozing a special southern charisma? Well, ultimately everyone has to decide for themselves where their threshold is when it comes to mummified insects in the general vicinity of their pulled pork.
So, another Friday, another Gibson – you can’t swing a dead cat over your head without hittin’ a Gibson’s BBQ around here. This is the fourth different BBQ place I went to in the last few months that carries this identifier in its name. However, the good people at David Gibson Bar-B-Q in Huntsville make it abundantly clear to you on their menu card that they are not in any kind affiliated to all those other Gibson’s businesses around here, and that they only have this one location to serve us.
But of course there is a family relationship to the aristocracy of North Alabamian BBQ.
In 1939, Mr. and Mrs. David S. Gibson began their business with David’s father – the famous Big Bob – in Decatur. In 1956, they moved to Huntsville and in 1960 they opened the restaurant at the corner of Bob Wallace Avenue and Jordan Lane. Today, it is owned by their son.
Not very much seems to have changed from those good ole times, judged by the dated furniture that shows clear signs of extensive use, by the sparse decoration of a few pictures on the wooden walls, and the worn out everything-else in this place.
Up until now, I always thought that Styrofoam plates are at the lowest end of the plate pecking order. Not anymore. Disposable Styrofoam school-lunch trays have just taken that spot. You know, those compartmentalized yellowish rectangles with the embossed work MILK in one of the compartments and embossed slogans like DON’T DO DRUGS, or EAT YOU VEGGIES on one of the inner walls. Unbelievable. They are probably dirt cheap and yes, they fulfill the intended purpose, and they are certainly unique, but classy they ain’t.
Any one part of all this alone would make the place just tacky and, figuring in the flies, also kind of yucky. All together however, this forms kind of an organic entity that oozes the genuine charm of unpretentious authenticity. So, to answer the question from above, I guess dead flies are a necessary part of the décor in those places.
And don’t fret, since they are already dead none of them will hop into your pulled pork. Although, if they did they might be resurrected at the spot, because the meat is just divine.
Very tender and succulent, with a very distinct hickory taste to it, it is to die for (sorry flies, for the disrespect). I had quite a bit of bark in my portion of pulled pork, too, which is of course the best part of the whole thing.
As for the sauce, they keep it very simple – a vinegar based pepper sauce that is only mildly hot, a wonderfully creamy sour white sauce and ketchup. Here, I mixed a bit of the ketchup with lots of the mild pepper sauce and out came a very agreeable BBQ sauce. The white sauce on the other hand is just the perfect match for their hushpuppies, which you can have instead of rolls. The puppies are not sweet but well seasoned, and they taste great although being a bit on the compact side and not of the more fluffy kind.
And then there is the potato salad, which has a mustardy sour and tangy taste to it – one of the best there is, really top notch. But this is all topped by the slaw. A hint of spiciness permeates the fresh cut pieces that are dipped in just enough vinegar to moisten the cabbage without drowning it in sourness. This is really the most outstanding slaw I had so far. Oh, they also give you baked beans with the meal. Those are okay. But the slaw … and the meat … utterly delightful.
Also very positive are the civil prices – for a large and a small pork plate, each with a drink, we paid under twenty-two Dollars.
The amount of food, though, is a bit disproportional. My large pork plate, which was three Dollars more, had distinctively more meat on it than the regular pork plate my wife had. But since she had the better view at the dead flies on the window sill, I guess we’re even. 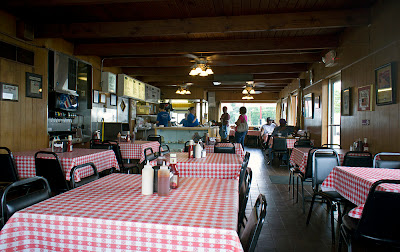 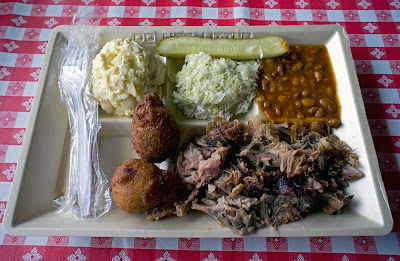 
How often does it happen that you a greeted and seated by a hostess in a BBQ joint?
They also serve the meals on actual chinaware, with metal silverware. This has to be like the crown jewel standard of BBQ restaurants. No Styrofoam, no plastic (except for the drinking cups …), no butcher paper for a plate – I was impressed.
A few months back, I already went to the other restaurant of the Gibson’s Bar-B-Q mini-chain in Huntsville on Whitesburg Drive (there are only those two places), and found the atmosphere to be … well, underwhelming.
Not so in their Memorial Parkway location, which is their main base and it clearly shows.
The dining hall is spacious, bright and very clean. On the menu, they claim that they are here since 1956, and that is about the vintage of the current furniture, too.
It is all wooden, with noticeable bumps and bruises in its dark colored surfaces, but very well maintained and you won’t find quick fixes by duct tape anywhere. It has clearly aged in style and it contributes quite nicely to the overall homey and friendly atmosphere of the place.
The service is also very friendly and also quick and responsive. So, while the external conditions are quite favorable, what about the food then? At least I do not usually go to a BBQ place to delight myself on the view, but to have some good stuff to eat.
Well, do not fret, it’s all here. As usual, I had the large pork plate with slaw and potato salad. They also serve hushpuppies with the meal, and I got four of those. And they are not exactly skimpy with the meat, either, so the amount of food was thus very gratifying for the fifteen bucks I had to pay for it.
Same goes for the quality – excellent!
The pulled pork had a distinctive but not overpowering smoke flavor to it, with a nice pink ring and some seriously tasty bark on top. It was more on the dry side, not as moist and succulent as in other places, but it was also very tender and very lean and had no pockets of fat in it, as I had to experience at another joint, also with Gibson in its name, not so long ago.
I have to admit, I like it when the meat is a bit more on the dry side – gives me an excuse to pour lots and lots of sauce over it.
You have the choice between two original sauces, a run-of-the-mill bottled hot sauce and the ubiquitous ketchup. The first sauce is thick and red, and although there actually is some sweetness to it, it has also a good amount of spiciness, It is not too hot, though, and would not leave a tingling impression in your mouth. For that, they have the second sauce, which has bit more thrust in that direction. It looks like a vinegar/oil basis with some ground chili and other peppers in it.
Mixed together in the correct ratio, it comes quite near to what I would call the perfect BBQ sauce.
They also have a white sauce on the table that is kind of vinegary/sour/peppery, which goes perfectly with the somewhat sweet hushpuppies.
The potato salad is made from scratch, which I was able to observe since the potatoes for next day’s batch were peeled and cut at a neighboring table (as usual, I was there after the lunch rush had been run out, so the crew had time to take care of some scores). The taste is leaning towards the sour side, but with a deliciously sweet undercurrent. Not the best potato salad I ever had, but definitely in the top ten.
The only disappointment is the cole slaw, which is rather watery, with extremely small cut pieces, and without any discernable taste.
But other than that quite miniscule grief, Gibson’s Bar-B-Q on Memorial Parkway in Huntsville is one of the best places to get your BBQ fix in Northern Alabama. 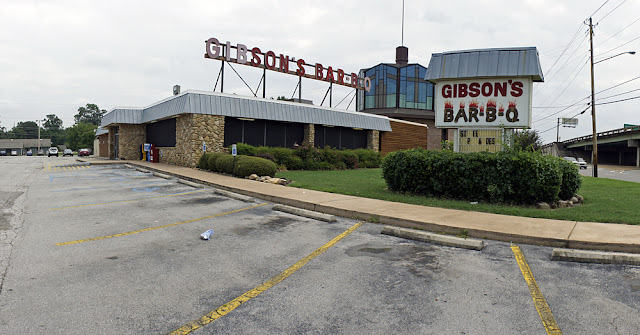 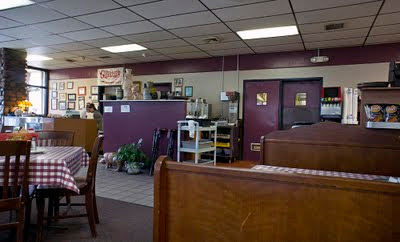 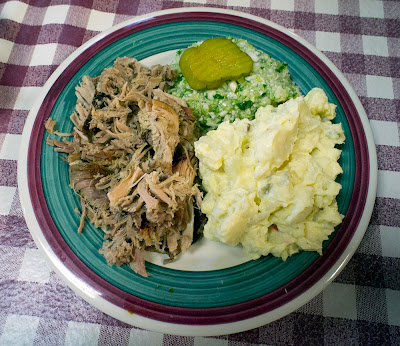 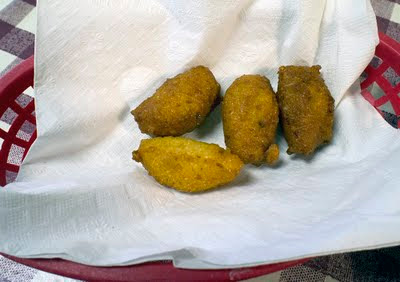