No money in the world can buy style and authenticity. But how do you find out if, say, a BBQ place has that? When you begin smiling as soon as you step over the threshold, because it feels like coming home, that is a good sign. A no frills atmosphere with wooden furniture, ceiling fans and a big menu next to the hole in the wall where you order also is an indication. And then, of course, an assortment of stuffed animal heads on the walls, and no sign of a flat screen TV also help to determine that.
Most of all, however, you know that a place has style and authenticity when the owner, who just prepared your meal, comes out, places himself a rocking chair and begins to chat with you. It doesn’t get any more authentic than that here in the South.

But very seldom does a BBQ place survive only because of its looks – if the food isn’t right, nobody really cares.
Well, as much as a snowball has a fightin’ chance in Hell, the New Market Bar-B-Q won’t go out of business because of bad food.
Everything there is home made, and they sell out frequently before closing time. The place itself is kind of a hybrid between a full fledged restaurant and a take-out joint, and is only open Friday to Sunday. There is no drive through, so if you want to get take-out food, you must step out of your car and come to the hole in the wall inside the building. It is kind of archaic in these modern times when everything else is always “on-the-go”, and I like it very much.
Of course, I stayed there for my meal and occupied one of the maybe ten chairs that are lined up along the long side of the building at a long wooden counter. This is kind of a novel layout, but it surely contributes much to the very distinctive style of the place.

But I detour again – so, back to the home made food.
As usual, I had the pulled pork, with slaw and BBQ beans this time. A small bun, a pickle and a small cup of sauce complete the meal, which comes in one of those doggy-bag carry-out boxes. A plastic fork and soft-drinks in cans add to the plain country style.
The food, however, is anything else but plain. The pork had a wonderfully smoked aroma, and it was very tender and not especially moist – just the way I like it. Don’t get me wrong, it was not dry at all, but sometimes when you are finished with your pork, there is a residue of wetness at the plate, which I can perfectly live without. This was not the case here, and I would say this pulled pork can run with the big pigs (pardon my French).
As for the slaw, I had to choose between the vinegar and the mayonnaise style, and went with the first one. Didn’t regret it, no Sir, not at all. That was downright one of the best slaws I ever had. Crunchy and fresh, with just the right amount of sourness and seasoned in a wonderfully balanced way.
Almost as good were the semi-sweet BBQ beans, which lacked, thank goodness, any hint of the dreaded cinnamon, but had little pieces of meat in it.
However, there is one part of the meal that did not find my univocal applause – the sauce. It is basically vinegar with a few spices in it, which produces, no surprise here, a very sour taste with a little zing to it. It actually harmonizes quite well with the semi-sweet beans and the semi-sour slaw, but poured over the pork it lacks the richness and body of a tomato or mustard based sauce. There is certainly room for improvement here. But they also have a killer white sauce for their chicken and a creamy-thick red sweet-and sour sauce.

But all in all, this is certainly one of those places to return to when you are in the area. And for about seven and a half bucks, including a soft drink, you can go there often. And maybe have a home made dessert, too, which I inexplicably refused this time. Could kick myself in the behind for that missed opportunity – so I guess, I just need to come back and have another lunch there. I heard their ribs are the killer, too, so I will probably bring my wife, the family’s leading expert in that category. We’ll see - so much BBQ and so little time. 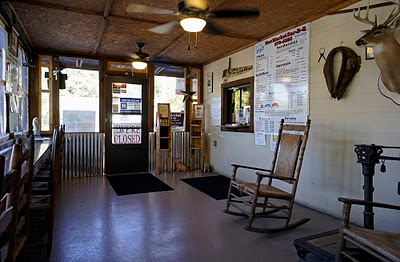 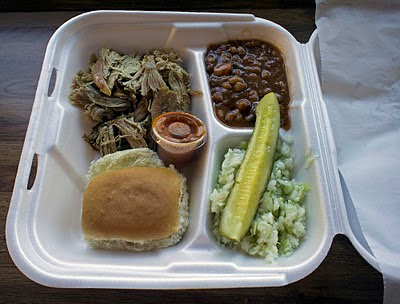