When a friend of mine told me that there is a new BBQ place on Highway 72, just outside of Athens, I was thrilled. I had noticed some activity lately in the old building, but always thought that was more or less in preparation to tear it down.
Well, now it hosts Madison County’s newest BBQ restaurant, so naturally I had to go there as soon as possible.
The 306 Barbecue is open now for about a month and it all began like so many BBQ businesses around here – a few friends regularly did BBQ at local High School football games for a few years, then they entered their first competition and did well there, next they put the big new smoker they purchased for the competition to good use at a local car show, and ultimately the idea to open a restaurant of their own was kind of stuck in their minds.
Good thing that due to the shaky economic environment empty floor space around here is easy to find and cheap to have. I really do not know exactly what business had been in the building before, but a withered street sign in one corner of the premises could give you the idea that it was some kind of antique mall or novelty shop.
The 306 has its own big and colorful street sign up, and that is also necessary, because the building alone would not reveal its new purpose. As inconspicuous as it is on the outside, it is also very unassuming inside. Everything is spotless clean, but it has no atmosphere whatsoever. The walls are empty, except for a few TV screens in the corners, there are no pictures, license plates, sports banners, or anything which would give the place a “face”.
The furniture is folding chairs and folding tables, and only the counter seems to be custom made and has a little bit originality with its front out of corrugated metal.
But I am willing to overlook many flaws in the interior design department, if the food is special.
Because I was very hungry, I ordered the 2-meat combo, with turkey and pulled pork, and with potato salad and slaw on the side. My wife had the ribs, and because they were out of baked beans, decided for the slaw and the squash instead.
When the meal was served, I was shocked – the turkey came in slices! Are we in Orlando here, or what?! I made a mental note to call the State BBQ police later …
But the pork was pulled, and it was delightful. They obviously know exactly what they are doing when it comes to smoking pork. It had a very rustic smoke flavor, with a hint of sweetness that I had not tasted anywhere else before. Together with the quite tangy and somewhat sour sauce, it was just the perfect combination. For this, I would come back here anytime.
Alas, there was also the turkey. Not only was it sliced, but it tasted predominantly salty and was an utter disappointment. Also, my wife’s ribs were very fatty and the taste was merely average, but at least they were of the so-tender-it-falls-off-the-bone variety.
The sides were also a mixed bag. The slaw was actually tangy and fresh tasting, with a sour note and a very nice crunch. And although the potato salad was not bad, it was also not more than average tasting. However, the squash, which was actually a concoction made with egg and cheese, was wonderful.
So was the red sauce – they have only that one at the table, plus a very good white sauce, as well.
As I stated before, very seldom have I encountered a sauce that complements the pulled pork so perfectly as this one.
Prices are in the normal range for BBQ in this area, we paid twenty-four bucks for everything, including our drinks, which is okay also for the amount of food we got.
The meals are served on those compartmentalized Styrofoam plates, with plastic forks and Styrofoam cups.
We also noticed that the sweet tea was not brewed fresh, but was replenished by those gallon plastic jugs you can buy at your local supermarket.
All that, and the lack of adornment on the walls, makes the eating experience there a somewhat ambivalent affair. This restaurant, through its great location on one of the busiest Highways around here, and their undeniable expertise and mastership of pork smoking, could be a raving success. But the lack of atmosphere and the comparatively lower quality of the rest of the food they serve prevents it to rise to my Top 10 list for now.
But they are doing this only for a month now, and the learning curve is certainly steep. And those flaws are easily fixable, so we will be back some time to check on their progress. Even if nothing changes, at least I know that I will get fantastic pulled pork there. 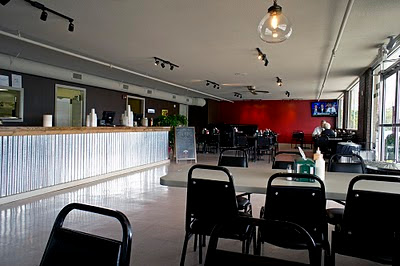 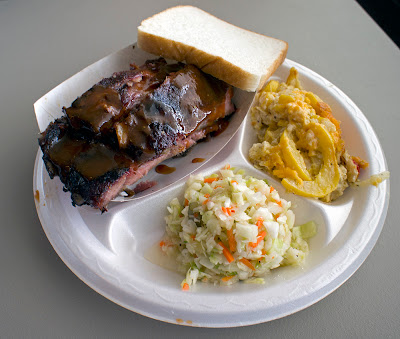 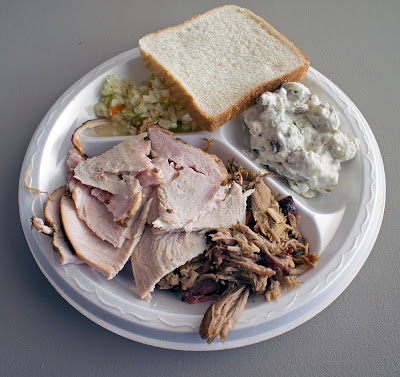