Kissimmee, Florida
During my occasional travels, I try to sample BBQ at those near and far away places outside the Quest area. I just really, really like that stuff ...
In the Orlando area, chain restaurants rule. Even most of the BBQ places there have at least two locations in the city – there are virtually no lone riders around.
Which is not necessarily a bad thing. Why not branch out if you have a good product, and make more profit? Streamlined logistics, rebates on expanded orders for your raw materials and dining room supplies, spill over of the customer base from one location to the other, and all kinds of other benefits can come from that.
Of course, there is always the lingering possibility that in the name of profit maximation you streamline everything too much and end up serving bland mainstream food after a while. Which, quite frankly, is what most of the BBQ places in the Orlando area reverted to. It seems to me that they predominantly cater to the Tourist who has “eating original southern BBQ” on their to-do-list, just after “see all four Disney World parks in one day” and “get a photo with an alligator on one of them farms”.
What a pleasant surprise is was then, when I found this little non-franchise authentic BBQ joint just half an hour south of Orlando in Kissimmee.
Fat Boys Bar-B-Q is there since 1971, it has no satellite station, is not part of any franchise, and it’s just your typical family-owned southern BBQ place.
The inside exudes this friendly family atmosphere that makes you feel welcome and at home. The walls are plastered with photographs of family, friends, and customers, and the medium sized dining room is divided in three rather cozy parts. In the background, you hear a local Country&Western radio station, and everything seems to be just laid back and casual.
The staff is also very friendly and the service is quick. The meals are served on resin plates with actual metal silverware, and the whole place is very clean.
So, I ordered my usual pork plate, with BBQ beans, slaw and potato salad as sides.
Of course, as customary in this region of the world, the pork comes sliced instead of pulled, but it had a very nice pink ring and a very pronounced smoky flavor. It was quite tender, but as is often the case with sliced pork, it was a bit on the dry side. Never mind that is also was less than hot … well, parts of it were actually rather cold. Must have been sitting there on the shelf for a bit before it got served.
As for the sides, I didn’t eat the slaw, which was just too sweet for my taste. The BBQ beans, on the other hand, were quite exquisite, with a very strong bacon taste and just a faint undercurrent of sweetness. The potato salad had a distinct dill flavor, and a tendency towards a mustardy taste, which I really liked.
The sauces were the usual concoctions for that area – one extremely sweet Sweet sauce, one not so sweet and actually a little tangy Mild sauce, and one rather spicy but otherwise tasteless Hot sauce, for which you had to ask separately.
And, as usual, the Mild and the Hot sauces mixed together would then result in an acceptable BBQ sauce.
The plate also came with two slices of toasted white bread, which was very dry and had a rubber-like texture.
For around thirteen bucks, including a drink, it is a fair deal, keeping in mind that prices in this region are a bit elevated anyway. Granted, they could heap a bit more meat on the plate, but that is just a minor detail. The big picture is that you get good BBQ there in an authentic atmosphere. One can only hope that this place stays there for another forty years, as a beacon of true BBQ tradition in a see of middle-of-the-road barbecue chains. 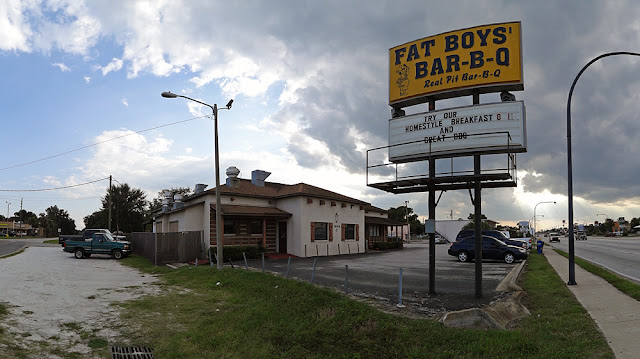 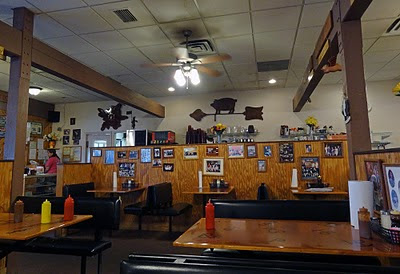 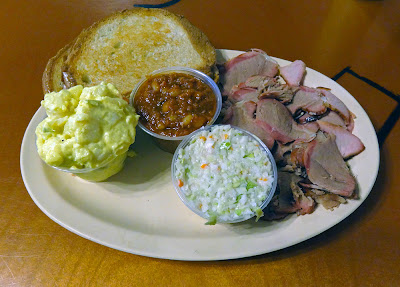