Orlando, Florida
During my occasional travels, I try to sample BBQ at those near and far away places outside the Quest area. I just really, really like that stuff ...
Life is full of despair, disappointments and regrets. The item on ebay that you bid so vigorously for is snatched away from you in the last moment, you overlooked the police car that was waiting only for you to run that red light in the middle of nowhere in the middle of the night, the big winning lottery ticket is one number higher or lower than the ticket you have, and finding a decent BBQ place in Orlando is an exercise in futility.
But once in a while, the sky is blue, the birds are chirping and at the end of the rainbow actually sits a pot of … pulled pork.
Well, it was not a sunny, friendly day, but actually a grizzly, rainy, hot and humid day in Orlando, a day typically reserved for occasions like the one you have left on your vacation to finally go to Disneyworld. Suffice to say that the weather perfectly fit my mood – another day in Orlando, another frustrating BBQ experience that was waiting for me. The places I tried so far had been merely okay, and I feared that this string of bad luck would continue. Bubbalou’s Bodacious Bar-B-Que … are you freakin’ kiddin’ me? If that was not a name straight out of the Tourist-Trap 101, what else?!
And the logo – three dancing pigs with designer sun-glasses on – kind of fit in there perfectly.
So, the first impression, from the outside, was devastating. But since I was here, I might as well go inside and check the touristy-mainstream food out, right?
Wrong.
Inside, the place actually looked a lot like some of the BBQ joints we have here in North Alabama. Wooden furniture, dead stuffed animals on the walls, interspersed with faded newspaper and magazine articles, a few flat screen TVs with sports on, a roll of paper towels on each table – I didn’t check for dead flies on the window sills, but even without that minor detail, the place looks authentic.
But I was not there to do a sightseeing tour, so where’s the beef? Well, actually I ordered my usual, pulled pork. The dinner plate comes automatically with slaw, beans, fries, and the inescapable Texas toast, which is fine by me.
Hey, wait a minute … pulled pork in Orlando? Aren’t those the clowns who are slicing the good stuff instead of pulling it? You can surely understand my amazement when I saw the pulled pork option on the big menu card that hangs behind the counter where you order your stuff. They also have the sliced variety on that menu, but who in their right mind … okay, let’s move on, I had the pulled pork this night.
Tender, juicy, with big chunks of bark, nicely smoked with a bit of a vinegary sour aftertaste – that’s how it was. Or, to sum it up in just one word: superb!
And yes, I checked if there was some kind of tele-porter which could have beamed that delicious meat here straight from Alabama. Couldn’t find any, so I guess they actually know what they’re doing at Bubbalou’s.
You have the choice between four sauces to refine the pulled pork experience even further.
The sweet sauce is a thick red concoction that is mildly sweet, has just a little zing to it, and has a well rounded bouquet. Furthermore, there are two sauces that are called “Hot” and “Killer”. Both are somewhat spicy, but also kind of tasteless and surely do not warrant any special attention.
That should be reserved for the mild sauce, which has a very nice spicy tang, with a mustardy aftertaste and a slightly sour background. That sauce is the real killer in the quartet.
The sides are also noteworthy, especially the slaw. It seems to be made with yoghurt dressing instead of mayonnaise, and together with the exquisite crunchiness of the cabbage, it gives the slaw a very fresh taste.
You’ll find some meat residue in the BBQ beans, which is always a plus, and there is also no hint of cinnamon, which is definitely a good sign, and also the sweetness of this side is less pronounced, and so these beans are quite delicious.
The ubiquitous Texas toast is of the very tasty and crunchy variety, and the fries are just that – fries. Still no sighting of potato salad in Orlando’s BBQ places.
For about fourteen bucks with a drink, this is a lot of food you are getting. They also give you real metal silverware, but the dinner comes on quite the flimsiest plastic plates I’ve ever seen. But who cares about stuff like that – it’s like complaining about the dirt on a World Series homerun baseball you just caught.
So, just when I was just about prepared to write Orlando off the BBQ map of the South, I found a Home away from Home at Bubbalicious, ahem … Bubbadacious … well, the place with the three dancing pigs in sun-glasses. 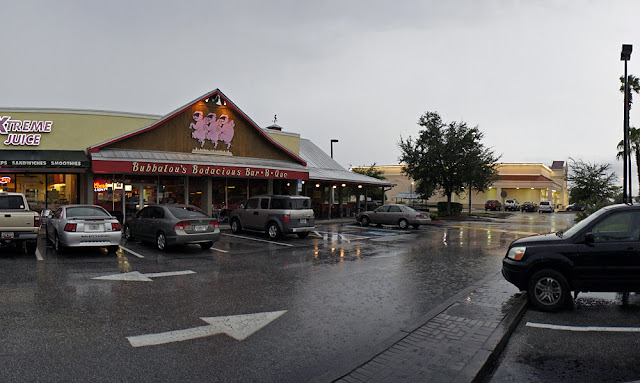 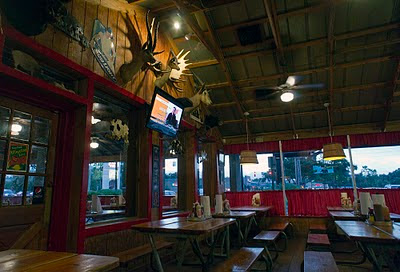