There ain’t no inside seating, just a few old weather beaten benches in a little nook just next to the walk-up window to the side of the building. There is a big spacious drive-up lane that leads to the drive-in window, though. This place, Southern Hickory Barbecue in Hartselle, is clearly geared towards the pick-up crowd.
There are two more Southern Hickories in Arab and in Cullman, and I wonder if they have inside seating there.
But it was such a gorgeous April day that my wife and I thoroughly enjoyed our lunch at the porch. Two months farther along in the year and our enthusiasm might be vanishing a bit on the prospect of having lunch under the baking Alabama summer sun.

As usual, I had a pork plate with slaw, potato salad, and baked beans, and my wife had a slab of ribs with the same sides.
The pulled pork was just great, very tender and very lean and just with the right amount of moisture, and the taste was very hickory-y. There is really no sauce needed to enhance the flavor, but it also don’t hurt if you sprinkle a bit of the peppery vinegar sauce it comes with on the meat, because the added spiciness gives the meat an additional aroma. That is how you do BBQ the right way, let the meat stand on its own merits and make the sauce optional for those of us who need an additional kick in the butt.
My wife’s ribs were also very tender, but not especially lean with some fat on it. Well, the taste was good, but certainly nothing to exchange the pulled pork for it.
We both thought that the baked beans were of the open-a-can-variety, but at least there was no cinnamon in it.
The slaw was sweet and vinegary-sour, whereas the sweetness dominated too much for both our taste. The potato salad was of the yellow-mayonnaise kind and also sweet and sour, but I found it to be deliciously on the sour side, whereas my wife was not really satisfied with the taste, which she found to be too sweet. She generally does not like sweetness in her potato salad – it’s a cultural thing, where she comes from the potato salad is tart and sour and never with even a hint of sweetness.
One very special item was the rib sauce. It was extremely fruity, with a good amount of spiciness and tasted not like anything we ever had in the BBQ sauce area. It seemed to have an Asian influence, and could even have such exotic aromas as Mango or Papaya in it. Anyway, whatever it is, it goes fabulously with the ribs.
A bread bun and a couple of pickle slices complete the plates.

For all this, plus two sweet teas (what else …?!) we paid about twenty one bucks. That is certainly not very cheap for a place with no inside seating, no table service and Styrofoam to-go containers as plates. But the quality of the food justifies the prices, and on a beautiful spring day, there is no better place to have your lunch in Alabama. 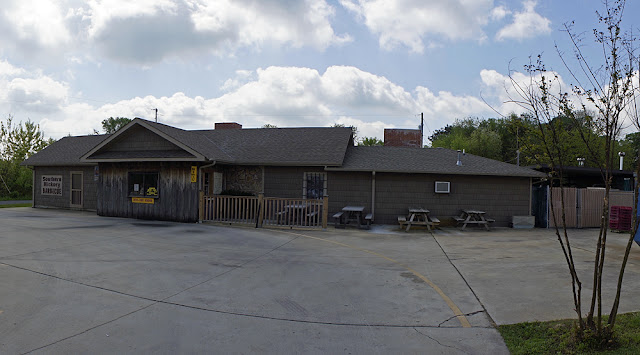 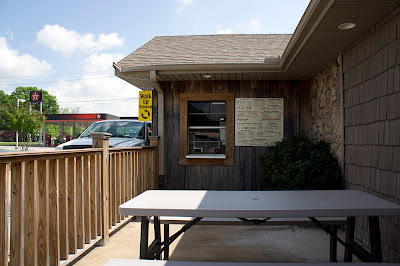 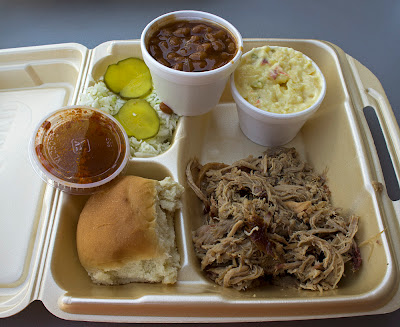 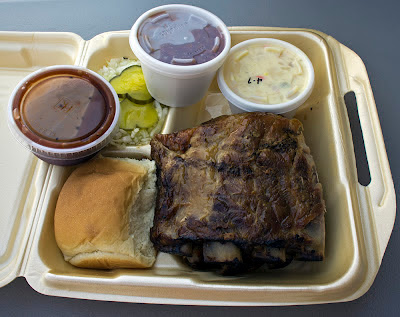