From 1819 until 1891, Somerville was the county seat for Morgan County. Back then, it had a cotton gin, a cabinet maker, a law office, two hotels, a college and a male academy.
The old courthouse from 1837 is still standing there, and also the former jail building.
But the cotton gin, shops, hotels, and colleges are long gone and today this little town is home to about 350 people – and one killer BBQ place.
Located in the vicinity of the old jail, in what appears to could have been an annex of the jail back then, it oozes old southern charm and hospitality.

When I arrived there, I could only spot a walk-up window on the porch as the means of getting BBQ. Well, I thought, it surely is a most beautiful spring day, and I would not mind at all taking my lunch on that porch, which has a handful of wooden tables with benches on it.
So I approached the walk up window, where the owner took my order. After I answered his question “for here or to go?” with “for here”, he asked me if I not rather wanted to sit in their dining room. Well, sure, I would be delighted. So, said the man, come around, I meet you half way.
So I left the porch, trotted around the small backside of the building and sure enough, there was a tiny handwritten sign that pointed out that there actually was a dining room.
And what a splendid room that is – all wooden walls on three sides (the fourth side next to the kitchen is of corrugated metal), wooden ceiling, a ceramic tile floor, wooden furniture (about half a dozen tables for four), nicely decorated with old pictures and signs, with some whimsical pieces of BBQ culture (meaning pig sculptures …) sprinkled in.
And the people in there, the owner and his serving help, are just so nice and friendly people that one might think that by entering that dining room, you might step through a door back in time, to those better old days 150 years ago.

I ordered my usual pork plate, with potato salad and slaw on the side and was regaled to an almost perfect BBQ lunch.
The pork was chopped and utterly flavorful, with a perfect mixture of meat and smoke aromas. Although it had a small amount of visible fat, it nonetheless was very tender and had just the right amount of moisture. I probably ate half of it right away, until I remembered that I also probably should try the sauces. Quite frankly, the meat did not need any sauce, so I poured just a tad of the thick brownish-red sauce on it. Fruity aroma, no spiciness, just a good sweet BBQ sauce. The other sauce is based on vinegar, but also with no spiciness worth mentioning it is just sour. Mixed together it provides a very nice conglomerate, but as said before, using this with the formidable meat is not a must at all.

The potato salad, also home made as everything on the menu, was nothing short of phenomenal and ranks in the Top 3 in that category. Mayonnaise based with a very refreshing tartness, it complements the BBQ meat perfectly.
Also on the sour side, the slaw is certainly very tasty as well, but in comparison to the meat and the potato salad, it does not play in the same league.

Usually I shy away from having dessert in BBQ places, because that is generally not their area of expertise. But this time, after the waitress assured me that the lady who makes the pies for them knows what she is doing, I ordered a lemon pie.
Should have ordered two pieces – very fluffy, with distinct lemon flavor, not too sweet, just great.
For all that, including an unlimited supply of sweet tea, I paid a bit over twelve bucks. And another fourteen bucks for one of their T-Shirts (it has a pig behind bars on it … you got to have that if you are a BBQ person …).

So, this place is surely a cut above most of the rest, and the only drawback is that they are only open for business from Friday ‘til Sunday. Well, that and the fact that Somerville is not exactly a place where you could do any other business, recreation or just would hang around for a while, and then go to lunch at the local BBQ. Once you have seen the old courthouse, and maybe the new post office, you are done there and need not come back. But for that kind of BBQ experience, I would travel there for that sole reason. 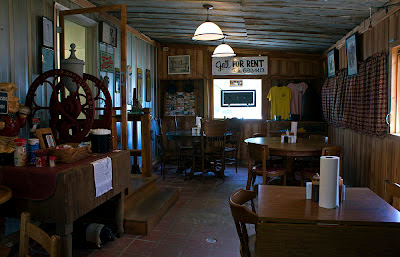 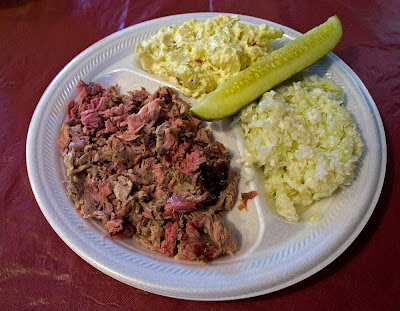 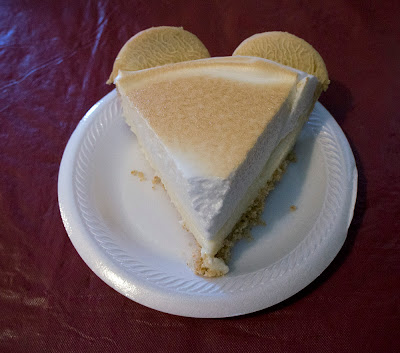