On my way from the Barons vs Stars game at Regions Park in Hoover to Vulcan Park in Birmingham, I had to eat something. At the ballpark, they had only those disgusting cheese nachos and other similar things, so by the time the Barons had finished their rally and beat the Stars 4-2, I was really hungry.
There are numerous BBQ places in Birmingham, but I thought, well, Full Moon is something you might expect a chop suey place named after, but not necessarily a southern chopped pork one, so I was anxious to check this out.

Full Moon Bar-B-Que is a franchise with eight locations in and around Birmingham. The business started in 1996 with the original place in Downtown Birmingham, but I went to one of the satellite stations at Valley Avenue, near Vulcan Park.
Well, the short story is, it is a family restaurant/sports bar that serves BBQ. Big screen TV’s all over the place, sports memorabilia, like a signed game shirt of Joe Namath on the walls, general layout and furniture like every other place with like an apple or a red pepper in its logo - the atmosphere of a streamlined eating culture.

But I was there to sample their food, although a nicer atmosphere would not have hurt my feelings.
They have a specialty there which is called “chow-chow”. Yes, like the furry dog with the blue tongue. It is a pickled cabbage dish that, according to Wikipedia “… found its way to the Southern United States during the expulsion of the Acadian people from Nova Scotia and their settlement in Louisiana.” So it is Canadian by origin, has a Chinese name and is served in Birmingham with BBQ.
How does it taste? Sour and spicy, with a nice crunch to it. I made the mistake of ordering it as a side dish, because I wanted to try it and the guy who took my order did not mention that it was included anyways. So, I ended up having a lot of chow-chow on my plate, plus baked beans, a freshly baked biscuit and the pulled pork. With a fountain drink, it came to just under thirteen bucks.

The pulled pork came with sauce on top, which I still find borderline criminal. Just let me choose what I want to put on my meat – I am a big boy and don’t need to have my plate fixed like a five year old. So I picked some sauce-free strands of the meat from the pile to get a taste of the flavor. Not bad, tender and moist, but also a bit on the fatty side. A hint of smoke flavor, not really a strong underlying meat aroma, though. Middle of the road pork, at best. The sauce on the other hand was just a one-dimensional thick red conglomerate, with spiciness as its main characteristic.
Better to take the chow-chow as sauce, which was also spicy but had a very distinctive hint of sourness, and some nice mustard aroma to it, as well. It was kind of like having a vinegar-pepper sauce mixed with a vinegar based slaw, plus some mustard.
The baked beans had quite a funky taste, which reminded me of onions. Never had that aroma in baked beans, and don’t need that ever again.

So, again the common wisdom that – generally, there are a few exceptions - you can’t get really good BBQ in franchise/chain places was confirmed. All you might get is okay BBQ with Canadian pickled cabbage. 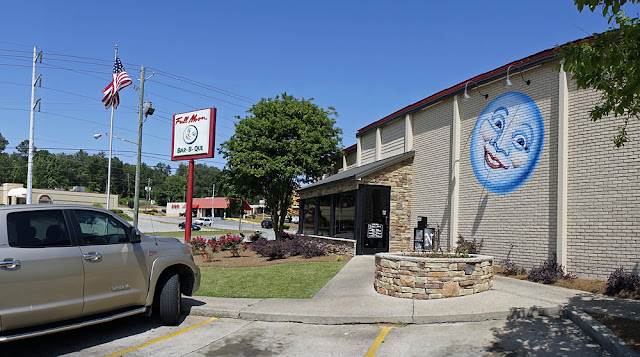 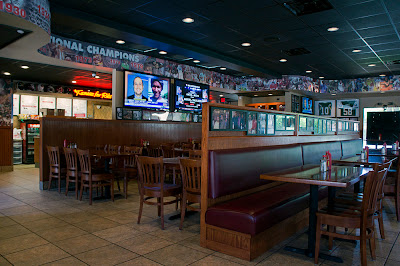 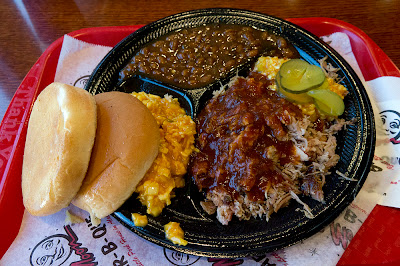