Conventional wisdom, or maybe just wishful thinking, or even only good advertisement, says that Decatur is the BBQ capital of the World. You know, with all the Trophies, TV appearances and the sauces you can buy at your local Kroger store.
Well, not so fast Paula Dean – your buttered-up gravy train obviously never made a stop in Hartselle. Granted, this lovely small town of fourteen-thousand people is just a few miles south-west of the big town, and might look like an outskirt of Decatur from thirty-thousand feet above. But here on the ground, where we mere mortals try to live and survive a certain TV personality’s onslaught of so-called “southern cooking” on TV and in books that uses fat and sugar as its main ingredients, it is a whole different vista.

There are three BBQ places in Hartselle, which gives this town a decent ratio of 1 BBQ per 4700 people (just for comparison, the numbers have been calculated by using data available on the Internet: Huntsville has 1 BBQ per 12800 people; Decatur has 1 BBQ per 6200 people; Madison has 1 BBQ per 5700 people; and Athens has 1 BBQ per 4000 people). What stands out here, though, is the uniformly great quality of the BBQ – all three serve top notch food.
And the third and last place on my list turned out to have the best food of the whole bunch.

Homestyle Bar-B-Que has been in business just next to the Jet-Pep gas station at I-65 Exit 328 since 1996. It is strictly a drive-through establishment, but there is some adjacent space nearby where you can park your car and eat your food in peace and quiet.
As usual with such a typical southern setting, the friendliness and cordiality of the owners is just refreshing every time.
Since I was very hungry, I ordered the large pork plate, and my question about what sides they had to choose from, I got the answer: “Don’t worry, it comes with everything”.
Which meant potato salad, baked beans, slaw, and two rolls. Together with the large portion of pulled pork, it was a huge amount of food. To say it forthright, I was not able to finish all of it, regardless of how badly I wanted, because it was so very good.
My wife also ordered her usual, a slab of ribs, but was told that due to the extra effort of smoking ribs, they would only have them on the weekends. Oh well, then how about a chicken plate? Sorry, dear, the chicken is not ready yet, was the answer (we were kind of early, close to 11 AM). Well, but the turkey is done and is sure is yummy.
So, turkey it was – and of course, it also came with everything described above.

We parked the car in the shade of some trees at a little gravel spot near the BBQ, and dug in.
The pork was lean but succulent, very tender, with a wonderful smoky aroma to the superb pork flavor. That meat clearly ranks very near the top of all pulled pork I’ve ever had. Also, the turkey was of the same mold, and amazingly it was not dry as it happens so often with that meat, but is had a very nice moisture to it.
The potato salad, always a critical piece for my wife and me, because we both come from a tradition of great potato salad makers, was made with yellow potatoes and mayonnaise, with little pieces of egg and pickles. The flavor was wonderfully creamy and balanced, with just a hint of tartness.
The baked beans had meat in them, which is always a good sign, and just the right amount of cinnamon to give it a little kick. They were not very sweet, more on the savory side of the flavor spectrum.
The slaw was very fresh and crunchy and made with just the cabbage, vinegar, salt and pepper. It was straight sour, without any hint of sweetness, and a refreshing change to all those standard sweet-sour slaws.
For the sauce, you have the choice of mild and hot – I opted for the hot one. It was a creamy red concoction with an underlying fruity tomato taste and with some well rounded peppery spiciness. Not too hot, just the right kick in the butt to get the best flavor out of the pork.
My wife had the white sauce with her turkey, which was predominantly on the sour side, and really quite the only part of the meal that did not find our unreserved applause.
Everything else was just outstanding, and for just under twenty-one bucks, with two sweet teas, it was a phenomenal deal.

Surely, we need to come back one weekend to try the ribs. Good thing that Homestyle Bar-B-Que is located just next to the Interstate, which makes it a short thirty minute drive from our home – to the new BBQ capital of … my world. 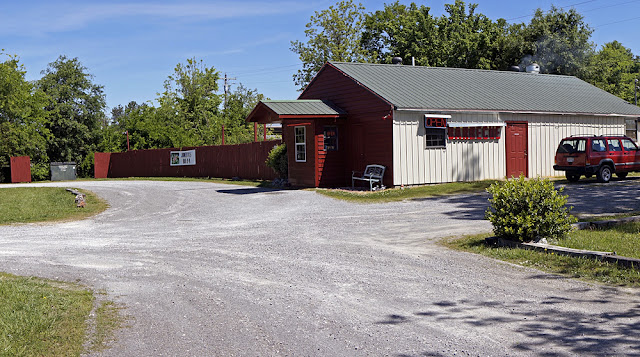 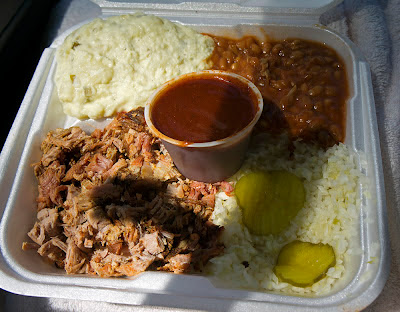 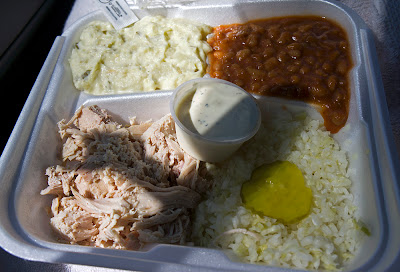