All Moe’s are created equal. We now have two of those in Huntsville, but if you know one, you already know the other, too.
The one in Providence Village is brand new, just opened two weeks ago or so, and has the same general layout as the other one – a sports bar where you can eat BBQ. Flat screen TVs in every corner, bar stools along the windows, loud music from the 1960s to the 1980s, metal frame tables and chairs, unpainted wood columns for decoration – you get the picture. Only at this here in the swank new Village, they don’t go overboard with the Tide paraphernalia.

Since we already had their pulled pork and ribs the last time we visited a Moe’s, and since all Moe’s should pretty much adhere to the same quality standard, my wife and I decided to go poultry this time.
So, we had the chicken and the turkey, with baked beans each, potato salad for me and Brunswick stew for her as second sides.
Wait a minute – Brunswick what??! Yes, stew. Hmm, although it was very tasty, with lots of meat and potatoes in it and some very laid back spiciness, I couldn’t help but wonder if my lovely spouse would not be stricken down by a bolt of lightning at any moment. Brunswick stew after April 1st … that is almost as sacrilegious as putting white sauce on ribs.

Well, the BBQ gods exacted their revenge swift and promptly, by letting us choose the turkey. Which came sliced, drenched in sauce, with a very prominent layer of fat on the outside and virtually no taste at all. Cardboard. Okay, tender cardboard. Still, no taste. Even the sauce did not help much here, although by itself this condiment is one tasty conglomerate.
They just shouldn’t pour it over my meat without asking me first.
And of course, the chicken came drenched in it, too.
It was half a bird, squeezed into one of their little cardboard trays, which made it a pure mess to eat.
However, it was very succulent and tender, with a very nice smoky flavor. We just shared it and left the turkey untouched after the first initial bites.

Good thing that we did not have to share the beans, too, because those were also very tasty. Lots of meat in it, with a very well rounded sweet aroma, and no discernable cinnamon in it.
The mayonnaise based potato salad was as neutral tasting as the last time, with lots of fresh, raw veggies like onions and celery in it.
With each plate, you also get a slice of rather dense cornbread, which tasted okay to me, but my wife did not like the sour aftertaste. That sourness did not appear in my piece, so I am guessing that the cornbread-making process lacks some homogeneity.
Just for kicks, we also had fried pickles as starters – which arrived after the lunch plates were already at our table. Although the taste was fine, we only could eat just the top layer, which was crunchy and firm, whereas the bottom layers got more soggy and spongy the deeper we dug.

For all that and two drinks, we paid almost twenty seven bucks, which is not cheap and also not a good deal if you take the quality of the food into account. I guess it serves us right – having Brunswick stew on April 27th just has to provoke some negative cosmic effect. 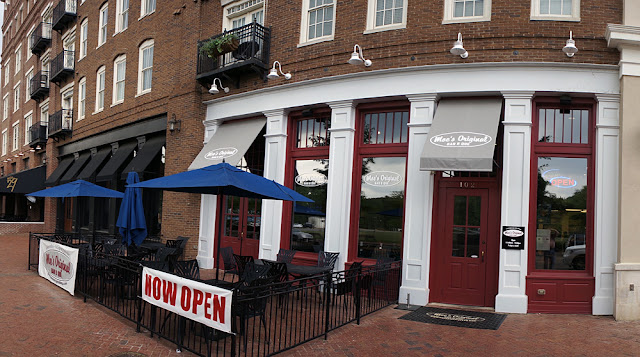 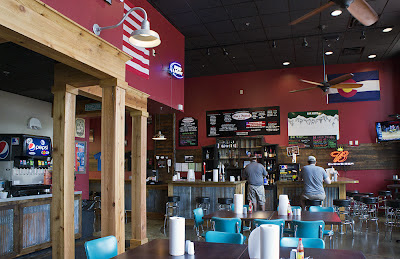 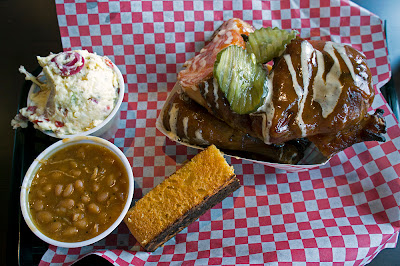 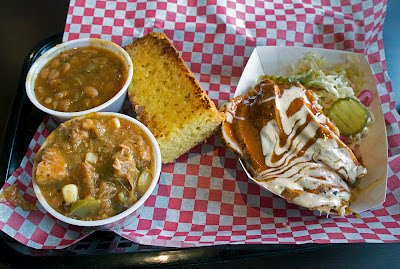