I fought a hard fight with myself, and then I decided to not incorporate Lincoln County, Tennessee into the Quest Area. One reason against this would be that it is, well, in Tennessee and not in Alabama. On the other hand, it borders on Limestone County and they have a BBQ place there which would be ranked in the Top 5 – if it was in the Quest area (which is the counties of Limestone, Morgan, and Madison in North Alabama).

And so, Corner Pit BBQ in Dellrose, Tennessee hereby receives the honorary title of “Best Alabama BBQ outside of Bama”. And that by a wide margin, too.
The place is located on a small rural highway, which leads you through rolling hills with farms here and there, lots of green trees, grass and bushes, and a population density not much different from the Moon.
Then the highway bends, and in the corner there it is. To the left is a big red shack were the smoker resides, and to the right the very spacious restaurant.
The inside is a mixture of typical country eatery, with the metal and red faux leather chairs, the round laminated wood tables and the fans on the ceiling. There is even a big flat screen TV at the end of the dining room.
But there is also old farm equipment hanging on the walls, old advertising signs and car number plates. An old rusty gasoline pump stands in one corner and another corner is occupied by a rack with T-Shirts, which have the logo of this place on it: a Pig that says “Our pigs are dying for you to eat!”
Of course, I bought one of those.
The whole atmosphere in that spotless clean place is very homey and comfortable. They have eight tables there, but the place would also be spacious enough to hold double that number. But given the somewhat remote location, there is probably no reason to prepare for such a rush anytime soon.

This is also fine by me, because I like the place as it is right now - not only for the atmosphere, but first and foremost for their most excellent food, of course.
As usual, I had the pork plate with potato salad and slaw, which cost me six bucks and was a lot of food.
The pulled pork, although it was maybe a tad more dry then it had to be, was very tender and lean, and it had a very nice smoky flavor. Lots of bark in it, too.
They have three sauces to go with it, but the mild one is really nothing special. It’s a semi-thick reddish concoction with a fruity-sour taste.
But the other two are THE KILLER. The Original Pit Sauce and the Hot Original Pit Sauce are also of the same thick reddish consistency, also resolutely vinegar based and also kind of fruity, but spiced up with pepper. The hot variety is a bit more aggressive then the original one, but both give the pork a kick in the butt that generates a BBQ aroma which is nearly perfect. I even put the hot sauce over my potato salad, so good is it.
Not that the salad would have needed that kind of support – it can very well stand on its own merits. Silky-creamy texture, with white potatoes and mayonnaise, onions and a hint of vinegar – this is how you do it. I just could not decide if it the slaw was even better – I think it is just fair to declare it a tie. I just love it when the cabbage comes in big pieces, and not in those minced to oblivion varieties. It was extremely fresh and crunchy, with just a bit of salt and pepper and vinegar, so that you actually have a chance to taste the veggies in there. Amazing.

My wife opted for the chicken, which was also very tender and although not blessed with a very distinctive smoke aroma, also very tasty.
The predominantly sour and mild white sauce that they have goes perfectly with it, though, and together it makes a very fine dining experience indeed.
Adding to that were what looked like ordinary green beans, but turned out to be green beans with a very robust meat-broth flavor that complemented the chicken and the white sauce perfectly. Her baked beans, on the other hand, although not bad at all, could not muster up to that level of sheer bliss.

With sweet tea (the ice for it came out of a cooler next to the cash register) for both of us, the whole meal was about fifteen bucks. For that kind of quality food, quality atmosphere and quality people (we had a very nice chat with Kristen, the owner), I felt a bit like a thief. They could have charged double and I still would deem it a fair deal. Well, for a little bit of compensation I spent some more money, buying a T-Shirt. Too bad that it says “Tennessee” on the back – this amazing little BBQ place would fit right into Alabama’s BBQ belt. 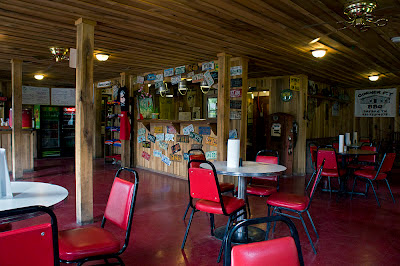 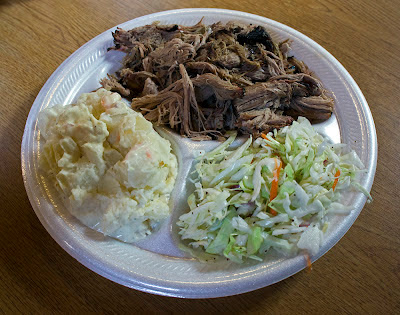 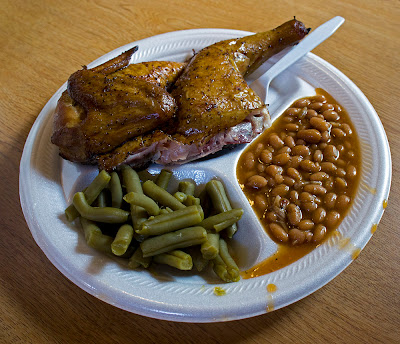