Since 1910, now in ownership of the forth generation of the family, David’s Barbecue in Arlington, Texas, serves Texas style BBQ. That means no pulled pork, only beef and pork ribs, turkey and sausage.
That’s fine by me, cows or pigs, I don’t care as long as it is good and tasty.

Still full after the big dinner at Bodacious Bar-B-Que the other day, I went for the two meat plate this time – only to find it to be just the same amount of food, only distributed on two instead of three different meats.
In case you need a refresher how Texas style BBQ works – it is like an assembly line. You grab a tray, and at the first station order the meat. Brisket and Links, please.
Then it goes on to the sides. Hmm, the potato salad looked kind of familiar – the also use caraway seeds as spice, so I passed on that and took the baked beans and the slaw instead. Last station, drinks and cash register. The sauce, which comes in classy glass carafes, stands on a little cart in the dining room, where you also find onions, pickles, jalapenos and the like.

The dining room is separated in two areas, which actually comes from the fact that at some time the original restaurant, which is located in an old, rather decrepit strip mall, was extended into the shop space next to it. Nevertheless, the atmosphere there is very authentic, a lovely mixture of country style and 1950s urban chic.
So, after finding a nice secluded corner to sit down, I dug into my meal.
The Brisket, although lean and very tender, did not have any discernable smoke flavor whatsoever. Same goes for the sausage links, which were not spicy but had at least a faint smoky aftertaste.
Clearly, here was some serious sauce action needed – and good Heavens, this action was provided by a delightfully sour reddish-brown concoction with just a hint of spiciness. That really rescued my mood from the unfolding disaster of turning into a foul and hostile creature.
But what truly really saved this meal were the sides. The slaw was crunchy and fresh, with a bold sourness to it. And the baked beans did not arrive in the sweet variety one is getting all the time, until all resistance and hope are crushed under the constant onslaught of molasses and cinnamon. This one was different – sour and a bit fruity. A new taste, indeed! Brave David, you have the moxy to liberate us from the death grip of the industrially acquired taste of mainstream baked beans.

You also get a Texas Toast with all that, which for about fifteen bucks including a fountain drink is not the cheapest deal, but the value received for that makes it a fair deal, indeed.

And so, after this experience and that with Bodacious Bar-B-Que the day before, I have to admit that, yes, there is decent BBQ in Texas. Just avoid the dreadful chains and trust your car’s navigation system to lead you away to some hidden corners, and you will be able to find the occasional gem. 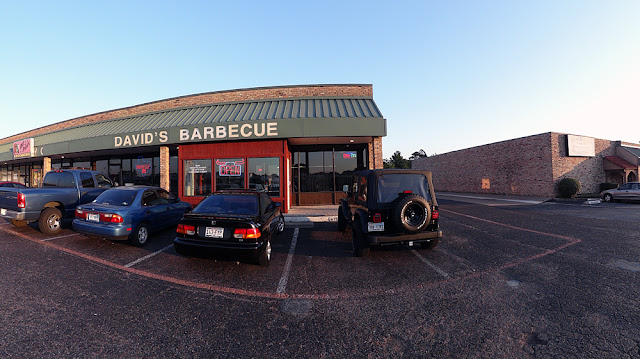 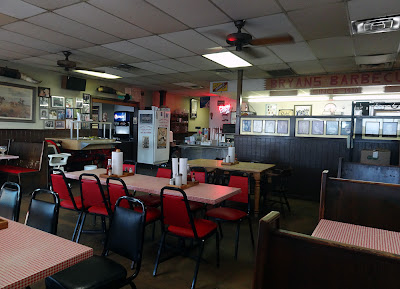 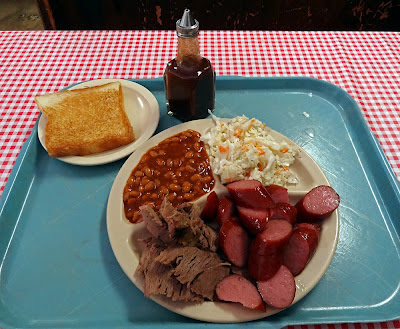