The name – Bodacious – is a bit misleading. There are no tassels involved, no pole and no red lights. Just extremely well smoked red meat, spicy sauces and tender butts.
There is no TV, just some good ol’ country music radio station for entertainment, sweet tea that comes in a (plastic) jar, instead of a dispenser, wagon wheels and cow’s horns as decoration, and a not so subtle country style atmosphere in the dining area. Classy and classic, veritably old school.

And when in Rome … or in Texas, for that matter, do as the Texans do. So I decided to go all out and had a three meat plate with Brisket, Links and pulled Pork. A manly sized portion in most parts of the continental US, but here in Texas that’s probably what a ten year old gets for breakfast each day.
The Brisket was just short of heavenly – very tender, lean, with a distinctive but not overwhelming smoky taste. Best brisket ever for me – but also only the third or fourth time I had that, I have to admit. So the measuring stick was not too big in this case. But anyhow, a very delightful experience.
The sausage links had a good spiciness on them, which suppressed the smoke flavor for the most part. There was a hint of it, but only if you really wanted to find it. No matter, they too were absolutely delicious.
The pork was also very tasty, but not due to the faint smoke aroma they sported. Very tender and very lean, you needed the sauce to support the flavor, which was absolutely not necessary with either the Brisket or the Links.
The sauce, which you got out of a pot at the counter, was red and thick, fruity and deliciously spicy. I am more a fan of the vinegar-pepper sauce variety, but if it has to be a thick red sauce, than this offering from Bodacious would be on my short list.

Too bad that the sides could not hold up to the lofty standards set by the meat and the sauce.
The cole slaw, though crunchy and fresh, tasted a quite bland. And the potato salad came with little dark speckles that could have been mistakenly identified as ants, but in reality it was caraway seeds. Funky tasting, to say the least. Not really bad, but also not what I would classify as “must have”. I took one bite and the affair was already done before it begun.

But all in all, because of the excellent meat and the overachieving sauce, and certainly because of the very homey atmosphere of this place, I wouldn’t mind to dine there again during one of my next trips to the region. With almost sixteen bucks for the whole meal, it sure ain’t cheap – but if the alternative is to spend half the money at one of those chain restaurants, it is a no brainer. Quality beats cheap every time, at least in my BBQ world. 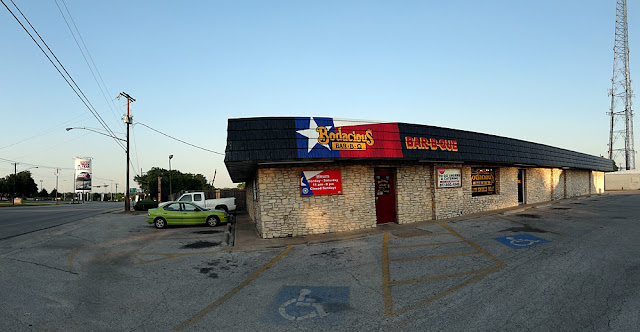 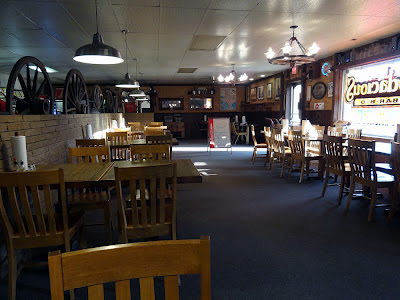 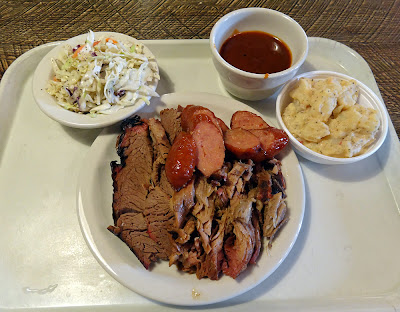