During my occasional travels, I try to sample BBQ at those near and far away places outside the Quest area. I just really, really like that stuff ...
When ancient Troy was excavated in the nineteenth century, jewelry, gold, diamonds and precious stones were found. Also, lots and lots of ceramic containers and earthen vessels were dug up, which contained the remnants of wine, olive oil, or meat. And some of those three thousand year old meat containers must have found their way into modern times Troy, Alabama. The meat I was served in one of their BBQ places today surely conjured those thoughts in me.
Country’s Barbecue is chain out of Columbus, Georgia, with restaurants in Alabama in Montgomery, Prattville and Troy.
I was on my way to the Rattlesnake Rodeo in Opp, when the urge for BBQ overcame me and it just happened that I spotted their place in Troy in time to satisfy my cravings. Or so I thought, but instead it turned out to be one of the more displeasing BBQ experiences ever.
The building looks rather country-ish on the outside, and inside it resembles your typical family-oriented chain-eatery. The walls are decorated with all kinds of vintage tin advertising signs, there are wooden booths with the ubiquitous faux green leather, and on the table you find a ketchup bottle and a metal tissue dispenser. All in all not a very original atmosphere, but at least clean and kind of nicely designed.
Service, on the other hand, was a rather mixed bag. They seemed to be understaffed for the prime lunch time, and though everybody was very friendly service was a little slow and not especially effective.
But I didn’t come here to be pampered, right?! I came here for the BBQ, so I ordered my usual pork plate with slaw and fries. Sorry, no potato salad on the menu – bummer.
Never mind that the two slices of untoasted white bread that were part of the meal arrived when I was almost halfway through – I am not that big a fan of that special kind of side item, anyway. Also, that the slaw was very watery, with no real taste whatsoever was not too important for me. On the other hand, I was more than a little disappointed that the fries were, well, floppy and lacked even the slightest hint of crunchiness, plus they tasted liked cardboard.
They have three sauces there, which are marked by their color – the lighter it is, the spicier the sauce. Well, the red sauce was just glorified ketchup. The orange sauce was very vinegary-sour, with a hint of mustard in it and a nice spiciness that left a mild tingling on the tongue. The yellow sauce, supposedly the hottest of the trio, was just bland, with no spiciness or taste whatsoever.
But the coup de grace was the meat. Lower quality than this I didn’t have many times before, and I sure hope that I do not have to endure something like that ever again in the future.
It was not pulled, but came chopped (or sliced, your choice), which was probably the only way to get those tough fibers apart – not even Hector, the Trojan hero from the war with the Greeks, could have pulled those strands apart.
Well, maybe if he used the many pockets of fat and gristle as points of attack, something that resembled pulled pork would be the result. Real fat, gristly pulled pork, of course. I had to leave about half of it on the plate – it was just uneatable.
So, this was one of the rather bad experiences I had so far in my BBQ quest. Fortunately, this place is not located in the quest zone – and quite frankly, what kind of BBQ the good people of Troy, Alabama, are being served is the least of my concerns. Their ancient name-givers pulled that big old wooden horse into the city walls, and out came the Greeks instead, and in modern Troy they have this restaurant that makes you think you would get BBQ – and what you really get is the leftover meat from the victory meal three thousand years ago. 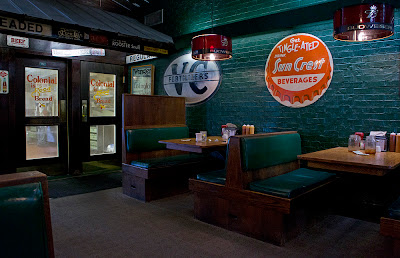 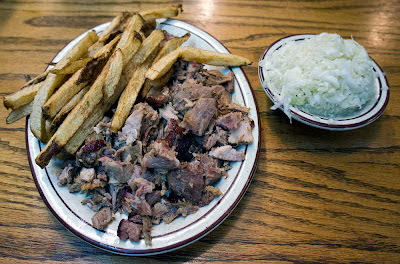