Although BBQ is a serious affair here in the south, usually there is also some mild eccentricity involved. Typically, the quirkiness revolves around pigs, with all kinds of statues, posters, photos, metal and neon signs displayed in the restaurant.
But if there is a ten foot long smoker in the backyard that has pig’s ears, nose and eyes out of metal attached to it - that is the definition of eccentric quirkiness.

And that is what I found outside of the Hazel Green Bar-B-Q. It actually fits very well the rustic atmosphere of the restaurant, which is built in a kind of pseudo-log cabin style. Inside, there is a big room with only four tables with two chairs each, which are metal patio furniture out of the home improvement store. The window we were sitting at had just a fly-net and no glass in it, the ceiling was covered with old tin plates, and the floor looked like the victory circle of a NASCAR speedway, with black stains all over it. Most of the business, from Friday to Sunday only, is done as carry-out, so I guess there is no need for more places to sit down, or better furniture, or a non-stained floor. So, it is very rustic, but also very clean.

As usual, I had the pork plate with three sides, potato salad, baked beans, and slaw, and my wife had the brisket with baked beans and slaw. The plates come with a slice of white untoasted toast bread, and we both had sweet tea, which comes in 16oz plastic bottles from Milos. For all that, we only paid about twenty bucks, which is a very fair deal in regards of the amount of food you get.

The quality, however, was no reason for jubilation.
They claim that all sides are home made, and I truly believe that. But that in itself is no guarantee that the taste is something special. In this case, the potato salad and the baked beans were rather pedestrian, taste-wise. Not bad, don’t get me wrong, but if it says “homemade” my expectations are a bit more demanding. The slaw, on the other hand, was kind of sweet, but with a spicy note in it. Very interesting, very tasty.
The pork was a bit oily, and had some fat in it, but it was very tender and had a deliciously smoky aroma. While one sauce comes with the plate, I allowed myself the luxury to add a second kind of sauce for a small amount of money. I chose the mustard based Sweet’n’Spicy and the tomato based Kansas City BBQ Sweet. They also have a white sauce and a vinegar based Hot and Spicy sauce.
I must admit that I have a soft spot for mustard based sauces. Mustard and pig just naturally belongs together in my culinary world, and while this variety here was not bad at all, the mustard aroma was too strong for my taste. Give the sauce a hint of mustard, make it the key note in the aroma, but don’t let it take over the show. It was just too much, almost like pure mustard. And the Kansas City style sauce was just boring, a concoction with no outstanding features besides its sweetness.
My wife’s brisket also had a very nice smoke flavor and was very tender, too. But about half of it was pure fat, and while fat certainly is a carrier of flavor, it is also not very healthy and too much of it should be avoided. She had the white sauce with it, which we will deny vehemently if the BBQ police ever get wind of this sacrilege. The sauce is a thin mayonnaise and vinegar based concoction with, again, no outstanding features.
In summation, I liked the rustic but very clean environment, and also the price was very good. The food had some highlights in the slaw and the flavor of the meat, but also had too much fat in it, and the other sides and the sauces could use some re-work. No bad BBQ here, but also certainly not one of my go-to places. 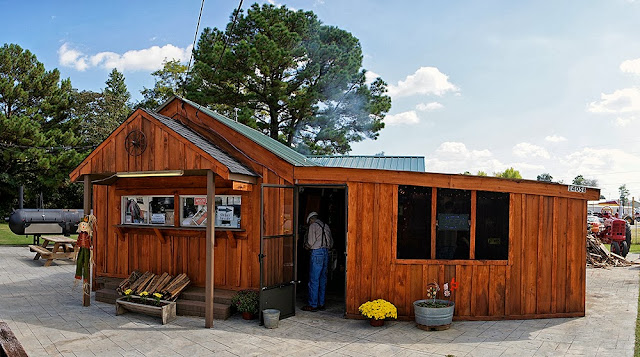 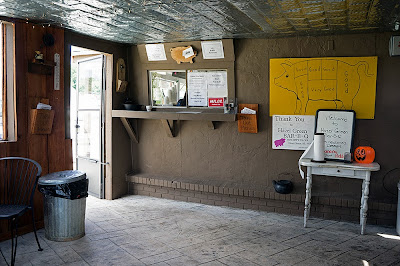 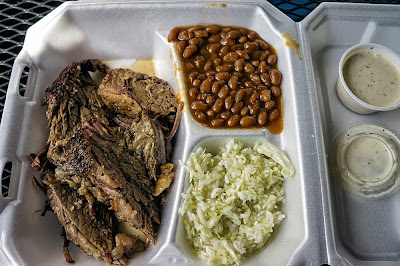 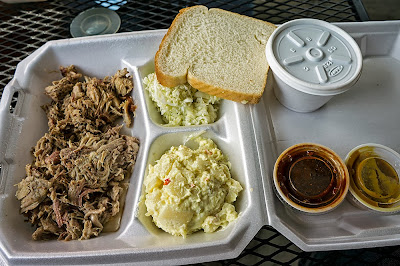