A while ago, I debated the question, whether dead flies on the window sill belong to an authentic BBQ place. The conclusion was that I did not mind them and that in certain circumstances they actually could contribute to the special atmosphere of a place. Living flies, on the other hand, are still a total no-no.

And that is the problem with those places that are primary take-out restaurants, with maybe just a few folding chairs and a table outside. You are usually better off to eat in the car, unmolested by pesky insects, or take the stuff with you at home, if this is not too far away.
The Meridianville Pit Bar-B-Q in, ahem, Meridianville is one of those places. There is one table with  four chairs outside the order window under a little roof, but since the trash cans are right next to it I would suggest using this offer – unless you like sharing your meal with winged pests.
Other than that, there is the occasional spider web with insect carcasses in it to be found in some corners, and a grimy substance covers most outside surfaces. That is, of course, coming from the US Highway that runs just a few yards away from the building. The building is also wedged between two gas stations. That all, and more serious violations inside once have led to a score of 75 (of 100) at a health inspection. You must score an 85 to get off the re-inspection list. So before I tried this place, I wanted to wait until the health score was in a region where I did not have to reserve a hospital bed before eating there. Now, they have a 94 and so I went.

First of all, the meals are really inexpensive there. I paid nine bucks for a large pork plate with three sides and a large sweet tea. Well, they do not have any overhead costs for maintaining a dining area, so it should not be pricey.
My pork plate came with baked beans, potato salad and slaw, a bun and a cup of sauce.
The meat was very tender and lean, not very moist and with a very subtle smoke aroma. Together with the simple vinegar-pepper sauce it tasted great, and I would say while it was not spectacular, it was how BBQ pork should be.
The sides were also nothing special, but also very good. The potato salad came with a mildly sour yellowish mayonnaise dressing, the slaw was a bit too much on the sweet side for my taste, and the baked beans were no different from what you can buy in a can. But while not one item was something special, all harmonized very well together, and the taste was extremely pleasant when one bite of the pulled pork with sauce on it was followed immediately by the potato salad and the baked beans or the slaw.

So, what you get at the Meridianville Pit Bar-B-Q is middle-of-the-road stuff for a very reasonable price. Just try to avoid the spider-webs and you’ll be fine. 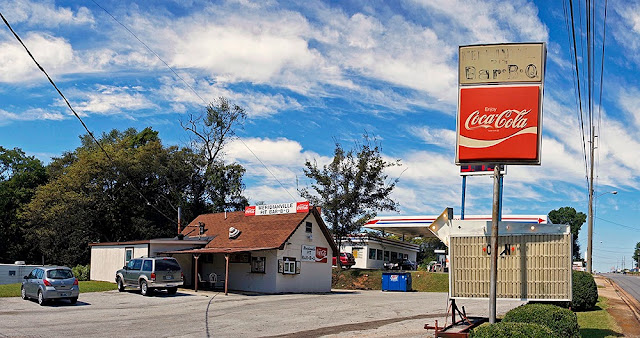 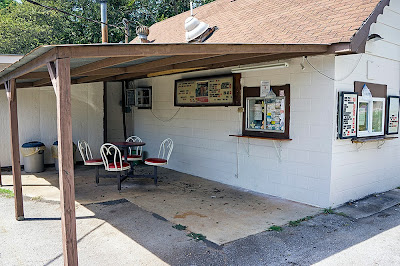 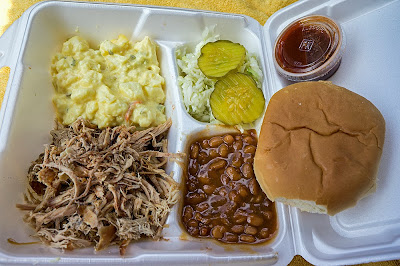