Take me out to the ball game, take me out with the crowd; buy me some peanuts and BBQ … BBQ? Of course, BBQ – we are in the South here, and Hot Dogs and Burgers are so Cooperstown (which is located in the beautiful State of New York, of course). So when the Birmingham Barons built their new wonderful downtown stadium, one of the concessions was claimed by Dreamland Bar-B-Que. Yes, that Dreamland, from Tuscaloosa, where at game day the Tide fans pack the restaurant tightly, to eat some fine ribs before they watch Bama roll over another hapless opponent. I tried to get in there once on a Saturday morning – no freakin’ chance in hell. But it is on my to-do-list, just not on a game day.

So then, Regions Field was finished just in time before the season started, and I was at the inaugural game there, which was kind of a transcendent experience. The architecture, the crowd, the atmosphere, the view of the lighted up downtown Birmingham – magical. Alas, no Dreamland. In early April, there was just the framework of the building where the BBQ place once should reside. So I ate a hot dog. Frustrating.
But then in early September, after a glorious season, the Birmingham Barons got into the playoffs of the Southern League – and I went to Regions Field again. In the meantime, Dreamland Big Daddy’s Rib Shack was fully operational, and so I gave it a spin.

First off, I have to say that nothing in the world beats the atmosphere of a Baseball stadium on a play-off day in late summer. And to eat BBQ there is equivalent to celebrating a religious service in a gothic cathedral. It does not get any better than this. Period.
Too bad then that the Q was not really that special. I ordered the pulled pork plate, which essentially was a BBQ sandwich with some potato salad. The pork came already drenched in sauce, on a standard bun. There was also a tiny cup of cole slaw hidden underneath the bun.
I struggled to find a non-sauced piece of pork, and eventually succeeded, only to find out that I had not need to bother – it was kind of neutral tasting, no real flavor in it. But the sauce, the Dreamland sauce, would certainly save the day. Ain’t so. The Dreamland sauce they serve in their location in Huntsville is a spicy, very flavorful concoction. The sauce on the pork here was your standard super-market-variety-sauce. Disappointing. The slaw was a letdown, too, it had also no distinguishable aroma.
The potato salad on the other hand was nothing short of spectacular. It came in a creamy dressing, with peppers and dill in it. The taste was more to the sour side, but the dill balanced it out marvelously.
But quite frankly, I did not come to the ballpark to have superb potato salad, I was expecting superb BBQ. And here there is definitely much room for improvement. And the price was also not to my liking - $11.25 for a BBQ sandwich and a sweet tea is kind of steep. Well, next year, I will go to Regions Field again, pack some money and maybe try some ribs. After all, it is probably called “Rib Shack” for a reason. We’ll see. In the meantime – Go Barons! 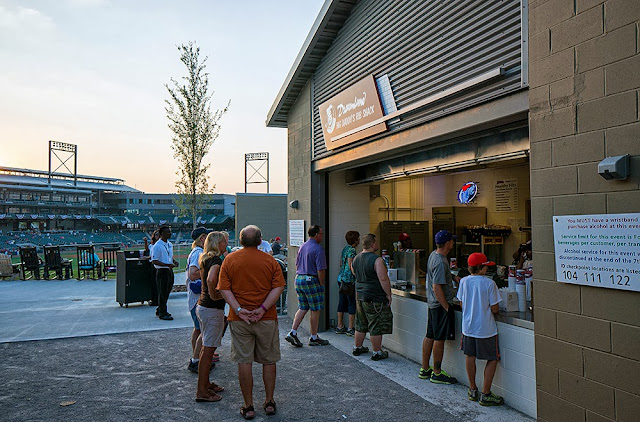 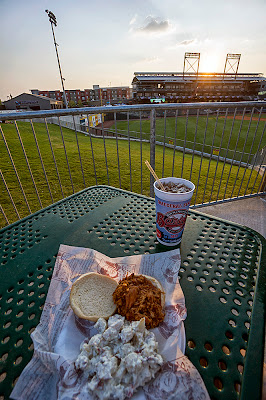 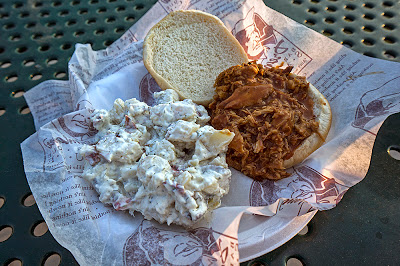