BBQ out of a trailer – that does not immediately garner my confidence that I will get something decent to eat. On the other hand, during the almost three years of my quest I had BBQ at some permanent locations that was also somewhat dubious, to say the least. So I guess the old saying, don’t judge a BBQ place by its cover really has some truth to it.

In Madison, on Sullivan Street just behind the train tracks, opposite the Downtown area on Main Street, stands a brand new red trailer that hosts Biffle’s Slow Smoked Barbeque. The Biffle’s are a retired couple who were looking for something to occupy their time with, so they decided on a food truck operation of sorts - only that their trailer remains stationary and does not move between locations.
There are two canopies in front of the trailer, where you can sit on a few chairs around a table or at a bench-table combination. The trailer itself is equipped with a smoker and a full kitchen. Due to the limited size of the smoker and the storage space in the kitchen, at times they sell out some items before their official closing time. As I was there, they only had some fruit punch left to drink, which was not a big deal, but don’t expect everything to be available at any given time.

As usual, I had the pork plate with potato salad and slaw. The plate also comes with either a bun or two slices of sandwich bread, and all together it cost me seven bucks.
Not a bad deal for a sizeable amount of food.
Alas, the quality was not up to par. The meat was rather oily and lacked the tenderness I would expect from slow smoked BBQ. There was no real smoky flavor, and the sauce, while apparently home made, was just a variety of the typical St.Louis-style supermarket sauces. It had some spiciness to it, but was mostly sweet. The potato salad had a mayonnaise dressing and was quite tasty, with a sour tang, but the slaw, while certainly fresh and crispy, had no taste at all.

I certainly had much worse BBQ in the last three years, but also distinctively better. So, I guess, it really is not so much the building you do it in, but how you do it that determines your BBQ. This is, of course, not really a brand new discovery, but rather a known rule. And while this peculiar style of BBQ certainly will find its audience, I do not see myself stopping by that trailer again anytime soon. 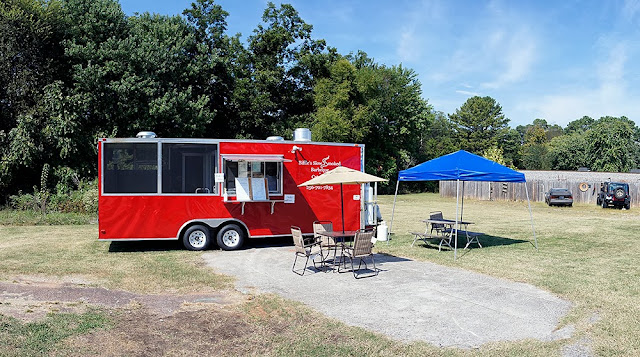 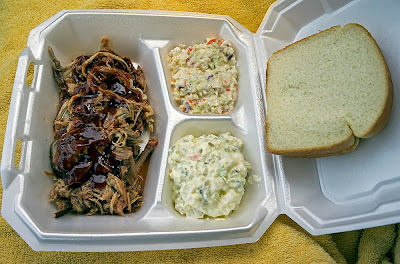