As I was driving to Dirt Road BBQ & Grill on the Beltline in Decatur today, a strange scene caught my eye. There was a pig and a blonde chick standing by the side of the street, frantically waving at the passing cars.
I stopped and asked, "Where did you get that?"
The pig said, "I won her in a raffle!"

No, this is not an entirely true story, just a very lame blonde joke, based on an actual pig-and-blonde-chick sighting. They were trying to entice drivers to stop at the restaurant for lunch. But besides me, I did not see anybody follow this siren song. Well, since I had planned to eat there anyways, so that does not count either. Bummer.

My wife and I visited the original Dirt Road BBQ in Trinity about nine months ago, and since then a small franchise was born. The newest addition to the Dirt Road BBQ family is this new restaurant on the Beltline in Decatur, which opened in August 2012. Its middle name is “Grill”, which describes the general focus of this establishment pretty well – think “Sports Bar”, and you are not far off. They even have Karaoke nights.
The restaurant is situated at the end of a strip mall, next to some optical shop. The exterior is dominated by a very large sign with the name on it. The interior is your typical family restaurant/sports bar layout, with the exception of about half a dozen booths on side that are made out of raw hewn wood planks. The original location in Trinity has more charm, but as a franchise concept I guess you have to streamline some things.

So I entered one of the booths, got my free sweet tea (they not only have Karaoke nights, but also free tea Fridays …) and ordered a Junk Yard Dog and a Turkey Sandwich.
Wow, wait a second – what happened to pork, potato salad and slaw, you might ask? Well, I invented this new rule that whenever I go to a different restaurant of the same franchise, I have to try something else then before.
Hence, the dog and the sandwich today, because last time I had the pork plate, comprende?

The Junk Yard Dog is a mess. I didn’t even try to eat it using only my hands – I would have looked totally stupid trying to tame the massive amount of stuff piled on that bun. A six inch long sausage with the diameter of a football (okay, that may be an exaggeration …), a very healthy helping of pulled pork, topped of with the special Dirt Road BBQ sauce and two handfuls of shredded cheese. Oh, and two pickle spears that were buried underneath the sausage.
I am not ashamed to testify here that I used a fork to partition this heap of meat, cheese and bread.
It says on the menu that the Junk Yard Dog is the favorite of Jason, the Pit Boss. I can understand this, because it is really good. But you have to make sure that with each bite you get all of the ingredients. The sausage alone is very mildly seasoned and kind of bland. Thankfully, it is also not fatty at all and the texture is surprisingly exquisite. The pulled pork is lean and tender and has a very nice smoke flavor. The cheese is the typical cheddar you find everywhere, and the pickles are … pickles.
The special BBQ sauce is much too sweet for my taste, without any zing to it. But together will all the other stuff, it makes for a very harmonious yet interesting taste. The sweetness of the sauce, the sourness of the pickles, the smokiness of the pork – never thought that this would work so well. Personally, I would probably exchange the cheese for some fried onions – then this Dog would possibly be sensational. As it is, I would rank it as amazing right now.

So, after this heap of food, I was surprised to not being filled up, but that I had some space left for the Turkey Sandwich.
Two thick slices of smoked Gobbler, some slaw and white sauce, all on a standard bun. The turkey was very well smoked, with a superb flavor, but unfortunately a bit on the dry side. The slaw was of the “let’s shred the cabbage into microscopic pieces” variety and has a sweet’n’sour taste, which dominated the whole sandwich, and I really didn’t taste the white sauce at all.
But don’t get me wrong – although the slaw flavor was quite overwhelming, the sandwich was tasty and at the end, when I reached some bites with only the turkey with a little slaw left on it, it was actually very good. The smoky flavor of the turkey came through quite nicely, which was overlaid by the slaw before. A little less of that, and this sandwich would actually have potential.

Well, I am no expert of the restaurant business, but I think we might see the beginning of a success story here. Yesterday Trinity, today Decatur – what’s next? I hear that Birmingham could use some good BBQ restaurant … 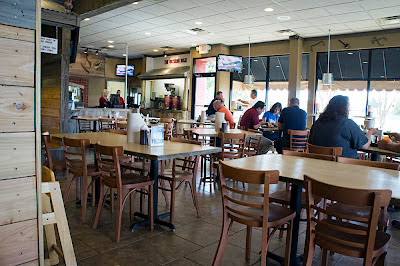 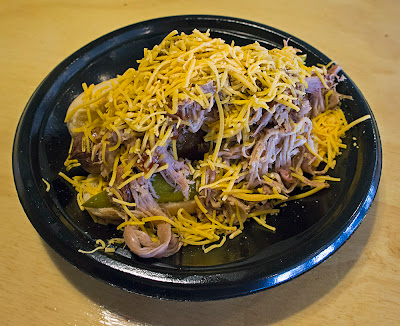 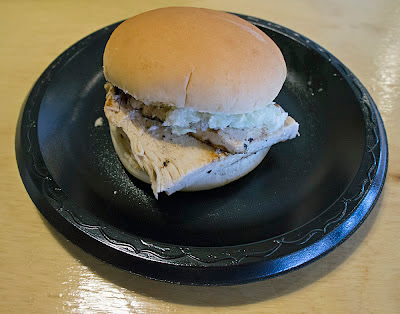 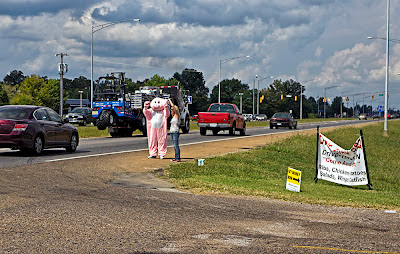