The name Porky’s will forever have a specific meaning for us folks old enough to remember the teen-movie from 1982. In the movie, Porky’s was a place of ill-repute, a hillbilly-redneck gentlemen’s club where a group of Florida High Schoolers were treated poorly and then took revenge on the slimy owner and his goons. Great fun movie, the critics hated it, the kids loved it, and it is in fact the highest-grossing Canadian film of all time.

To name a BBQ place Porky’s is not really a revolutionary idea – it actually seems quite obvious to me -, but during almost two years of being on this quest now, I only found one restaurant that had the moxy to call itself so. Maybe it is the association with the place from the movie that let people shy away from this name.
Be it as it may, in Grant, Alabama, they have a Porky’s Bar-B-Que.
It is situated right at the main street in the middle of town, and other than the movie place that sports some outlandish big neon-piggys on the roof, the place in grant only has a simple sign with the name on it.
Well, it kind of fits the somewhat sober interior. About half a dozen booths on the wall, two rows of tables and on the other side of a six feet high wooden barrier the same layout. It is just a typical, nondescript eatery like so many along America’s highways.

Although, one thing sets it apart from many other restaurants – there is a smoking section in the seating area beyond the barrier in the middle of the room. This is quite unusual to find these days in restaurants, and rightfully so. I like my meat smoked, not the air that I breathe.

And quite frankly, their meat could have used some of that smoke that floated around the room when I was there. It was lean and tender and had a very distinctive pork taste, but no smoke flavor whatsoever, and it was very dry.
The sauce on the table was of the run-of-the-mill thick red sweet’n’spicy variety. I only noticed other sauces at a table next to the soda fountain, when I refilled my drink after the meal.
The slaw was made with vinegar and had a very nice peppery flavor and a good crunch to it. The potato salad was made with mayonnaise and tiptoed on the sour side of life.
In addition to that, the pork plate came with a slice of Texas Toast.

For just under nine bucks with a fountain drink, the amount of food was very fair, and the overall quality was acceptable. But the smoke was definitely in the wrong place at Porky’s in Grant, Alabama. 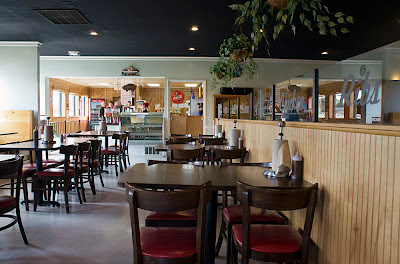 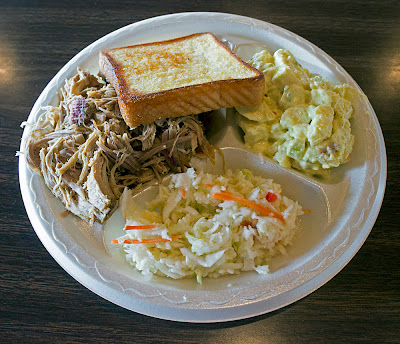