The Alabama Mountain Lakes Tourist Association publishes a guide called “North Alabama Barbecue Trail”. Of the 16 BBQ place featured in there, I have visited only seven. Well, I might need to expand my coverage beyond the three counties of Madison, Morgan, and Limestone eventually. But do I really need to travel to Cherokee or Boaz for good BBQ? We have about sixty BBQ places in those three counties mentioned above, and I am struggling to visit each of them – which is still my goal - as it is. And quite frankly, there aren’t many BBQ restaurants outside this area that are really worth driving two hours for. We are truly blessed not only with a fairly high density of BBQ joints here, but also with some of the best BBQ one can imagine. The quality at the top is just amazing, and even the average restaurants are usually better than what you can find elsewhere.

So then, the seventh of those restaurants mentioned in the brochure, which I visited during my quest was O’le Dads Barbeque in Hazel Green.
My large pork plate came with three sides – potato salad, vinegar slaw, and baked beans. Also, you have the choice between a roll and three hushpuppies. Well, what choice? Exactly.
The meat was tender, with a very distinctive but not overbearing smoke flavor. It was also quite moist, which lets me think that maybe a liquid of some kind was added to keep it from drying out. Thankfully, it was not oil, which would have given me the cramps (see The Main Dish for reference). I am not a great purist, and since the pork was very tasty and the meat, while more moist than it probably should have been, was not soggy or flabby, I don’t want to make a big fuzz out of it.
The baked beans had some meat in them and were not sweet at all – very good.
The potato salad, on the other hand, was a bit blah, basically your standard on the sour side tasting mayonnaise-based concoction without any outstanding features.
And the slaw was of the sweet variety, which I personally don’t fancy that much. All sides together, however, with the meat and the hot sauce on it, generated an amazing taste experience. Sweet, sour, peppery, smoky, plus the different textures – amazing.
Oh, and the hot sauce is really hot. It is a simple vinegar based pepper sauce with some kick – and a very attractive orange color. It might even glow in the dark.
The mild sauce is just a standard thick brownish-reddish sweet’n’spicy sauce – you can grab one of those at the next supermarket.
So then, we come to the absolute highlight of the meal – hushpuppies. Three of them, fresh out of the fryer, each the size of two golf balls.
In my humble opinion, and in my wife’s expert opinion, these are the best hushpuppies on this planet (sorry Greenbrier Restaurant, you just lost that title …).
Crunchy on the outside, fluffy yet firm on the inside, with a perfect golden color and not too sweet - just the way hushpuppies were intended to be.
Dip them into the remnants of the baked beans sauce and this is better than any dessert.

For all of that, times two because my wife had the same meal, plus a large cup of sweet tea and a can of soda, we paid just under sixteen bucks - which is a more than good deal in my mind.
Of course, there is the drawback that for this you have to drive out to Hazel Green, the well known center of the universe. But the place is very easy to find, it sits right at the very busy US Highway 431/231. Most people get their BBQ as carry-out, which clearly has its reason in the fact that the dining area of O’le Dads Barbeque is half a dozen tables in a screened porch at the front of the building. The porch has no air condition, but features the lovely background soundtrack of speeding eighteen wheelers, ambulance sirens, and general heavy traffic.
It is not the homiest place you can imagine, but surely one of the most authentic you can find. And the food more than compensates for that little nuisance. 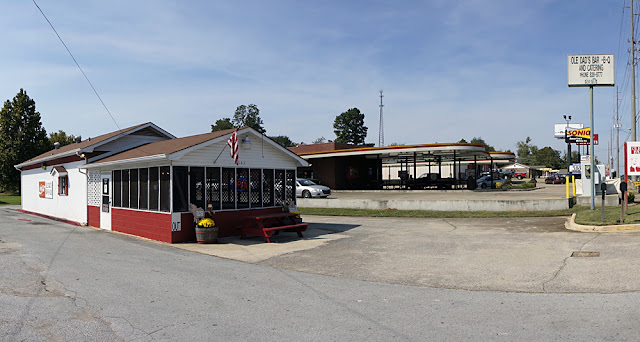 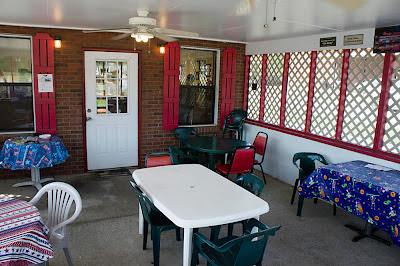 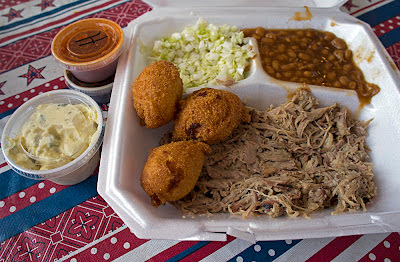