There usually is an economical way to do things, and a no-compromises way. With BBQ, I certainly prefer the latter one – only the best ingredients, the best wood, the best everything, plus a little extra love on the side will satisfy me. But then again, I am not out there to make a profit, so my perspective might be a little different from those BBQ entrepreneurs.
Whitt’s Barbecue started as a backyard family business in Athens in1966, and the extended family, plus some non-family franchise owners, owns and operates 25 restaurants in Tennessee, 5 in Alabama, and 1 in Kentucky nowadays. Certainly, standardized processes, shared resources, wholesale orders, and all the other by-products of the economy of large numbers helped to shape this little empire.
What were left behind were individuality, innovation, and inspiration. If you turn the first letter of the franchise name on its head, what do you get? Another golden arch …

Well, that said, I would prefer Whitt’s southern style fast food over a sloppy burger any day. And fast food, it is – all the Whitt’s restaurants are carry-out/drive-through places. You get your meal in a Styrofoam box that is put in a brown bag with the corporate logo on it. They have a walk-up window in addition to the drive through, for those of us who roam the country side on foot.

I already visited the Whitt’s on 6th Avenue in Decatur a year ago, and there I had a Turkey sandwich. This time, I took the pork plate, with potato salad, baked beans and slaw. It also came with a roll and a small cup of sauce. For this, and a cup of sweet tea, I paid about eight Dollars. Overall, I’d say that this is a very good deal – you get a decent, though not great BBQ meal. But let’s get into the details now.

The meat was succulent and very tender, although it did not have a very distinctive smoky aroma. I had better, but I also had much worse, so although this probably does not represent the pinnacle of pit mastery, it is okay. So was the sauce that came with it – a vinegar based, non spicy pepper sauce with a somewhat lame kick.
Not okay, on the other hand, was the slaw – much too much artificial sweetener in there, just awful. The baked beans were also very sweet, but at least I could not detect cinnamon in there. I hate cinnamon in baked beans, and the absence of it made even this sweet concoction bearable.
The potato salad on the other hand was really good. It had a slightly sour taste, some real egg in it and an overall savory aroma. My wife liked it so much that she declared it the best potato salad she ever had in a BBQ place. I would not go as far as that, but will concede it to be above average.

So, if you need something good for lunch and you are in the vicinity of a Whitt’s, there is no reason not to go there. I just would not drive thirty miles for it in the middle of a snowstorm, like with a few other places I know around here. 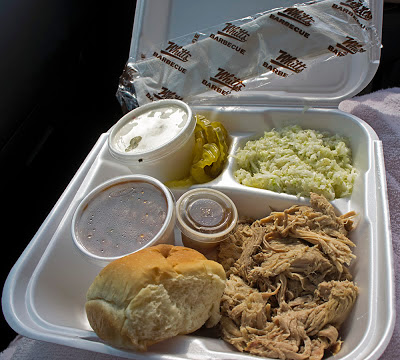