There are two Whitt’s Barbecue places in Athens, and after visiting the one on Elm Street, my wife decided that we should go to the other one, on Marion Street, as long as we were in the city. That was fine by me, for I can eat BBQ more than once a day without any problem. Her motivation to go to the second place was pure scientific curiosity – would they have the same quality?

Well, when we pulled up in the parking lot, that question was answered immediately – since the place on Marion Street does not have a pit of its own, they apparently get their meat from the place on Elm Street, which has a pit.
So much for the quality comparison then.
We decided to get a sandwich there anyway. I took a Turkey sandwich, and my wife had a Beef sandwich – with all the fixins’, lettuce, pickles, mayonnaise.
Additionally, my wife had half a pint of potato salad, because she only got a few scoops before on Elm Street, and she really liked it.

My Turkey sandwich was not bad, but it also was not a real BBQ sandwich. If there was any smoky flavor to the turkey, it was overlaid by the taste of the pickles and the mayonnaise. Don’t get me wrong, it was still a very good sandwich, but not really a very good BBQ sandwich. Maybe a white sauce instead of the mayonnaise, or less pickles, or both would do the trick.
And my wife was downright disappointed by her Beef sandwich – slow cooked, she said. No BBW flavor, plus the dominance of the mayonnaise and the pickles. A very good sandwich, but not if you expect at least some BBQ flavor.

Anyway, if I had the choice between a Burger joint and Whitt’s, the latter would win most of the time. And since there seem to be no other halfway decent lunch places around in the Marion Street area, I can absolutely understand that this place was overrun by people when we were there.
But again, as with the place on Elm Street – no way I would drive there 30 miles in a snowstorm. 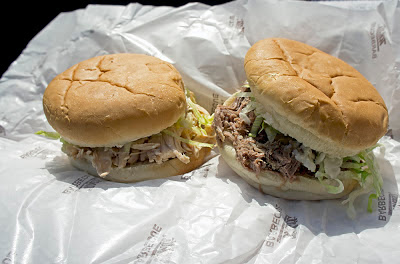