The purist version of BBQ is certainly pulled pork on a plate, with a couple of sides and some sweet tea. Maybe a pulled pork sandwich does qualify, too. But if you put pulled pork on something else – is this even BBQ anymore? Like, on a gigantonomous baked potato, with cheese and sour crème and the kitchen sink?
Well, that’s what I had at the Lawler’s Barbecue Express #5 on Memorial Parkway in Huntsville today.
You know my rule – if it’s a chain, I’ll have a different item from the menu in each of the various locations.
So this time it was the stuffed tater with pulled pork, for about nine Dollars with a drink.
While I wouldn’t want to eat that every day – I am trying to preserve my girlish figure, you know, and this thing surely has a gazillion calories - I must say that it was very tasty. The pork was very tender, lean and succulent, and it harmonized extremely well with the other stuff they put on the potato. They had their four sauces on the table, but I did not need any of them – it was perfect how it came out of the kitchen.
And yes, I know, they do not smoke their meat in those satellite locations, but do it in a central place up in Tennessee and drive it down to Alabama then. The purist in me cringes at the mere thought of it, but the hungry man says, as long as it tastes good, who cares? It surely beats the food you usually get at the next burger joint.
Although, from the looks of it, this place on Memorial Parkway does not have many special features that would distinguish it from other fast food restaurants.
It is located at the corner of a small strip mall, and the interior is, well, functional. Some wooden tables and chairs, a few decorative signs on the walls, really nothing special. Other Lawler’s have a more special interior, with more attention to detail and a much cozier ambience. This place has a more factory like charm – which is understandable, because it is clearly not a typical family dinner location, but a place where Joe and Jack from the power company emergency unit get their lunches. Big taters and all. 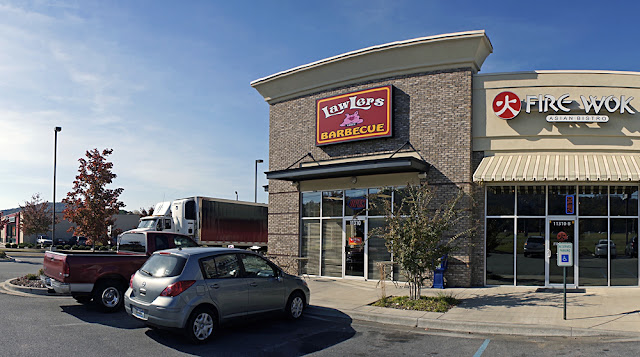 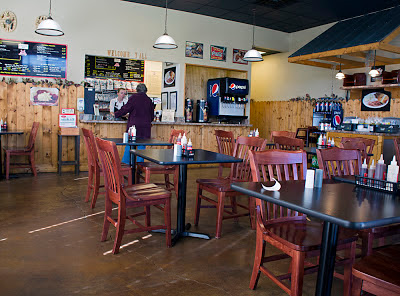 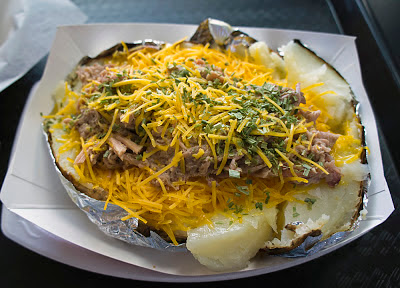