During my occasional travels, I try to sample BBQ at those near and far away places outside the Quest area. I just really, really like that stuff ...
Competition BBqing is a world of its own. The teams have colorful names that nobody in their right mind would dare to slap on the street sign for a regular BBQ joint – “Two Fat Boys and a Grill”, "Motley Qüe", "Smell my Butts", "Chainsmokers", "Smart Ash Smokers", to name just a few of those that were at the Stokin’ the Fire BBQ Festival at the historical Sloss Furnace in Birmingham today.
Some teams wear rather outlandish costumes, some at least matching T-Shirts and some don’t care at all about fashion.
The BBQ rigs you see there range from the ubiquitous black drum to machines that require a Ph.D. to operate. All recipes are of course of the cosmic secret variety and espionage is punishable by banishment to New York, where they think that BBQ is just some meat you put on a grill.
For the seventh year now, the good folks at the Sloss Furnace have put together this Festival, and last year the grand prize winner actually came from Madison. Not that this is the least bit surprising – this here is, after all, the BBQ Nirvarna.
But some other folks, not from North Alabama, can cook real good BBQ, too. And at this festival, you can sample a lot of different styles.
The smell alone is worth the seventeen bucks they want from you at the entrance – after a few hours wandering around, sampling, chatting, and listening to the live music, your clothes will be soaked with the fragrance of smoked pork and burnt hickory.
As I write this, sitting here and still having the smell in my nose, although I showered and discarded my clothes hours ago, the results of the competition are not yet online. But I am sure that the winner is totally worthy of that honor – and it would be no surprise if they came from this neck of the woods, again. 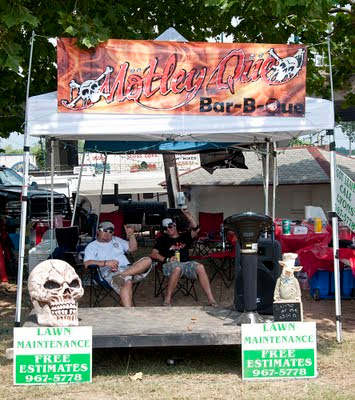 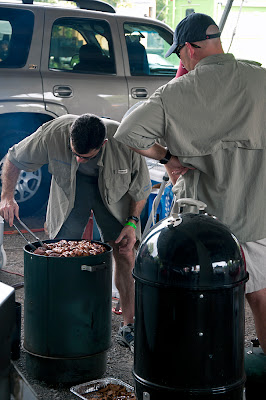 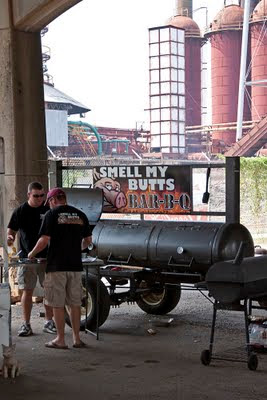