Chuck Wagon BBQ in Madison is a bit different, in many ways.
First of all, it is Texas style BBQ. Yes, they have pork, but their specialty is brisket and sausage. You order at a carving station, where the owner will carve the meat before your very eyes, measures the weight on a scale that has a very visible sticker “Made in the USA” on it, then puts it on a plate and gives it to the guy who puts the sides on it. In the meantime, the owner has discarded the excess juices from carving the meat into the bowl with the BBQ beans. Yeah! That’s how they freakin’ do it in Texas!
Needless to say that the BBQ beans are the very best I ever had – not only does the meat juice go in there, but there are also real big chunks of beef in it, too. Yeah! Or Yippieh, or Yeehaw, or whatever they do in Texas when something is really outstanding.
And that is true for the potato salad, which is, of course, home made, too. It is of the mayonnaisy variety, but has a nice sour note to it. Oh, and one more thing about the beans, which are the owner’s great-grandfather’s recipe and are cooked campfire-style over the wood fired grill – unlike many around here, these do not have this overwhelming cinnamon taste, but have a very strong meaty flavor instead. Yeah! Yippieh! Yeehaw!
But enough of the sides - although those alone would make it worthwhile to go there. But if you decide to pay a visit, arrive early. They open at 11 AM and usually by that time a line has already formed that wraps around the place two or three times.
The restaurant itself is rather small, it holds maybe half a doyen tables for four in the main room and maybe a few more tables in the adjacent expansion room. That room was apparently attached after the word about the beans got around and the place was overrun by the masses.
The interior decoration is very authentic for such a joint. Wooden tables and chairs, a few very small booth-style tables in the back, plastic table cloths, wooden walls and floor, a few Western-style decorative items – nothing fancy, nothing special, just homey and kind of snuggly.
Outside of the building there is a big trailer - it looks like one of them horse trailers – where the meat is smoked, Texas style. That means that the fire never touches the meat, so that only the smoke cooks the meat. Which is, kind of, the way we all do it here in Bama anyway … any other way would be just uncivilized and not real BBQ, am I right?! Thought so.
Usually, I would have pulled pork, but this time I decided to go with the brisket instead. It just looked so fantastic when the owner prepared it for the lady in front of me, and plus it is really their staple, so I decided to break with tradition.
Didn’t regret it for a second.
The meat was moist, very tender, extremely tasty, with a hint of mesquite wood, and with just a little fat on it. There is really no need to pour sauce on it at all. But if you must, they have two kinds – mild and hot, which are of the dark red, thick, tomato-fruity variety. The hot sauce is a bit more spicy than the mild sauce, but it is really not that hot at all, it just has a nice kick to it, that’s all.
You have to grab a small cup and fill it with sauce when you get your plate after it is loaded up with the sides, so no sauce drowning orgies at the table here. Which is okay, because - really, trust me - you don’t need the sauce. Well, maybe to dunk the toast that comes with the plate in it.
There is also the special Chuck Wagon Sandwich that is not on the menu – just ask for it. This comes with two meats of your choice, and whatever your second meat might be, let the first meat be the smoked sausage. I heard that there are people who came back several times to try out any possible combination with the sausage.
With a drink – you can buy a can of Soda, no glasses or cups here – the brisket plate cost me about thirteen bucks. Not really on the cheap side, but the quality of the food, the fantastic taste, the BBQ beans (Yeah! Yippieh! Yeehaw!), and the really nice atmosphere at the Chuck Wagon BBQ makes this a very fair deal.

Remark (23 April 2013): The now also have a killer white sauce, a killer vinegar-pepper sauce and a über-killer mustard based sauce. If this is not heaven ... 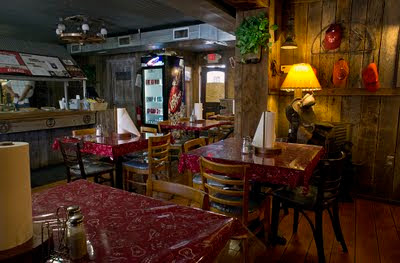 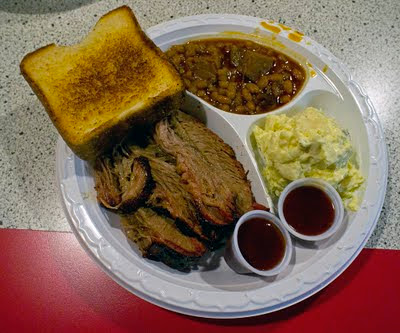 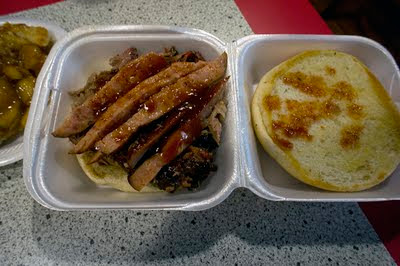