During my occasional travels, I try to sample BBQ at those near and far away places outside the Quest area. I just really, really like that stuff ...
I know, I know – Cracker Barrel ain’t a BBQ place. And that’s why I list them under the Non-Quest topic, to be fair. But they are serving a BBQ brisket plate there, so of course I needed to check that out, right?!
Everybody here in the South knows Cracker Barrel, of course. It is a big restaurant chain that serves you good southern cooking on a mainstream level, but nevertheless, while it may not be the original finger lickin’ home cooking of your great-aunt Bobbie Sue, it is still in a different league than those ubiquitous Burger joints and “Family Sports Bar Restaurant” thingies.
They also have a store in each restaurant, where you can purchase all kinds of neat stuff, like John Deere Christmas ornaments, College Football Team memorabilia (Roll Tide!), Quilts, Candy and Condiments.
So, there I was, having a Country Brisket Plate at Cracker Barrel – “…slow cooked hickory smoked beef brisket slices on Texas toast. Comes with a side of sweet BBQ sauce, thick cut steak fries … and a sampling of cole slaw …”.
Well, it wasn’t bad at all, and for a mainstream restaurant, it was downright exceptional. The brisket was very juicy and tender, and it had a real nice hickory taste, and just a small amount of fat. I would not rank this at the top of the crop, but it was clearly much better than I had expected.
And in combination with the very garlicky Texas toast, it actually soared to culinary heights never reached by such a mainstream joint before. You really do not need the BBQ sauce with it, which is a good thing, because the sauce is not as sweet as advertised, but rather on the sour side. And that does not complement the brisket on the toast too well for my taste. Don’t get me wrong – the sauce in itself is not bad, but for this particular brisket I would have chosen a more sweet and tangy concoction.
As for the sides – the slaw is a bit watery in all its mayonnaisy glory, but I certainly had worse and though it would not hold a candle to the top dogs in a stand-alone competition, it certainly complements the brisket real well.
And the fries are just that – fries.
So, was it worth the ten bucks with a drink (take the raspberry lemonade, if they have it …)? Although the portion itself was not very generous, the quality of the food was real good, so I guess that is a fair deal. Another bonus is, that in being a chain restaurant, certain sanitary standards apply – no flies on the window sills, for instance. On the other hand, the big dining room is not the least bit cozy or authentic. But the food is served on real china, with actual metal silverware – a far cry from the Styrofoam plates and plastic utensils in most real BBQ joints. But that, a real BBQ joint, Cracker Barrel ain’t – and the very decent brisket plate they serve ain’t gonna change that anytime soon, too. 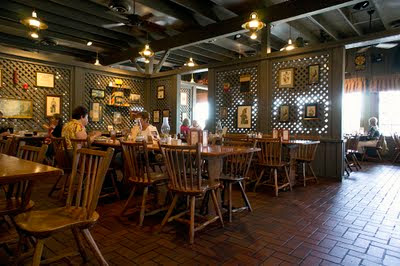 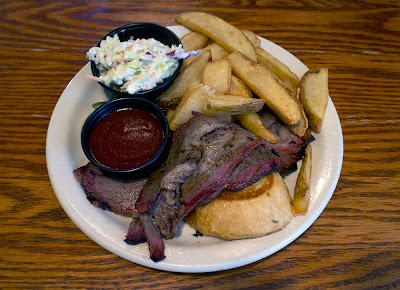