The food is dirt cheap at Floyd’s Barbeque on Pulaski Pike in Huntsville, my small pulled pork plate with two sides was a bit over five Dollars. And the folks there are friendly.

Right now, after mentioning all the good things there, I should probably stop. Because unfortunately from now on, it ain’t gonna be pretty anymore.
Floyd’s is a drive-through/walk-up joint only. There is a rather bumpy and worn out driveway from the main street, which wraps around the equally worn out blue building, leading to the window where you order, pay and get your goods.
The menu is typical southern BBQ stuff, pork and turkey, slaw and potato salad, baked beans and sandwiches, and all is real cheap, too.
So is the quality of the food. The meat was soggy and mushy, with lots of fat in it and although the taste was not even too bad, I only had a few bites before my stomach would raise the white flag.
Each plate comes with some yellowish concoction that rather mysteriously is called “cole slaw”: That; it definitely ain’t. It tastes like nothing else I ever tasted and not at all in a good way. I refuse to even try to describe the taste, because the memory of that small bite I took is still painful.
It was probably a good thing that they were out of potato salad, so I chose two helpings of baked beans as sides instead. Those were of the out-of-the-tin-can variety and thus the least revolting thing on that plate.
No, I stand corrected – the toast that came with the plate was actually not too bad, either. So, this can end now on a positive note after all. 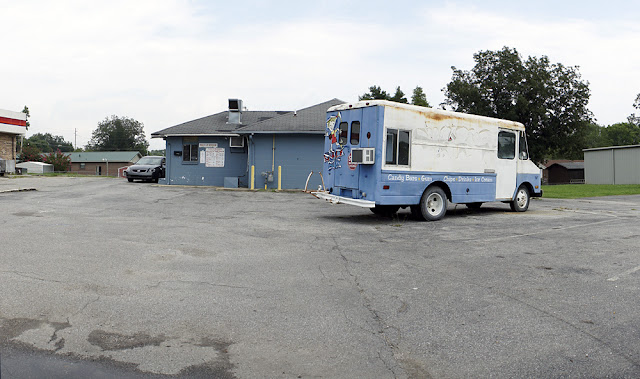 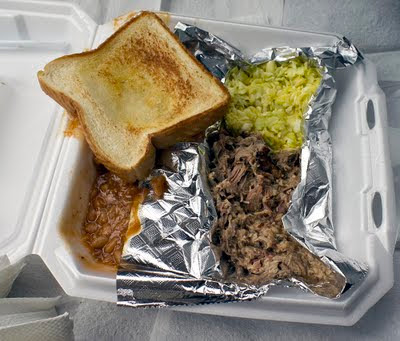