It ain’t gonna get more authentic than this.
Thomas Pit Bar-B-Q on Highway 72 in Madison, Alabama, is the real deal. They are at the same place since 1932, when Madison was just a sparsely populated railroad stop, and not home to the largest population of engineers per square mile, as it is today.
The outside of the building certainly looks like from a distant era, and the inside is also not the most modern one could imagine. No flat screen TV’s on the walls, an old chewing gum machine at the counter, the occasional dead spider in a window corner, and the dust of eight decades on the wall decorations – very authentic and old school.
When I am there, and I go there often, sometimes a thought crosses my mind – was Wernher von Braun, the engineering genius behind the Saturn V Moon Rocket that was designed and tested in Huntsville in the 1960s, a BBQ fan? And if so, he surely must have come here. Often.
Because, besides the authentic atmosphere there, he would have gotten the best BBQ in Northern Alabama- as I do nowadays, every time I come here. And I come here often, and not only because it is right around the corner from where I live.
The pork plate at Thomas Pit Bar-B-Q is actually what first got me hooked on BBQ way back in the day. Since then, I’ve tried many different BBQ places, but although a few come close, the unique mixture of authentic atmosphere, authentic food and authentic history is hard to surpass.
This place just has charm – you cannot pay with plastic money there, only cash is accepted. On Saturday nights, the line at the drive through window runs into the next county, and when your order is ready they will shout out the number on your ticket, and you better hurry to fetch your food, or the next shout will be louder and a bit more harsh and impatient.
And really, there is absolutely no excuse to let that delicious food sit on the counter even a second longer than necessary. I always get the large pork plate, with slaw, potato salad and lemonade.
The meat is smoked in a dedicated building adjacent to the restaurant, and it provides half of Madison with this unbelievable aroma each day – except Sundays, when they are closed like every authentic BBQ place here in the Bible Belt.
The pulled pork is juicy and tender, wonderfully flavored and just perfect in every regard. Yes, perfect. I dare to proclaim that publicly, and I stand by it.
The potato salad is very unique, since the potatoes are not sliced, but diced real fine, so it resembles the slaw which is also diced in the same manner. The taste is a bit on the sour side, but not in an overwhelming manner. That is also true for the slaw, which is of the vinegary kind, as opposed to this strange variety you sometimes find that is drenched in mayonnaise. Again, this is just very authentic and old school.
As for the sauce, they have an original hot sauce that has a vinegar base, and which is very peppery and very spicy indeed, and an original white sauce – which you only get if you ask real nice at the counter. And there is the ubiquitous Ketchup bottle at every table.
Yes, I know. That certainly looses them some serious style points with us purists. But to be quite frank here, although I usually sneer at Ketchup in favor of the original sauces, in this case a mixture of the hot sauce with the Ketchup will work miracles. With those two ingredients, after some experimentation, one can achieve the perfect blend of spiciness, sweetness and tanginess.
The large pork plate also comes with two slices of toast and two cups of country crème, and that is truly a lot of food you get for exactly ten bucks.
The meal is served on those inevitable foam plates, with plastic silverware and a single-use plastic cup for the drink. Well, this is certainly not quite authentic and kind of on the cheap, but at least you can leave all the stuff on the table after your are finished – they have a dedicated cleaner who takes care of that.
But there is one major flaw I have to complain about - they don’t serve Hush Puppies. Given their track record with anything else, those puppies would probably be to die for, if they decided to put them on the menu. But maybe it’s a good thing that they don’t have them – it would be too much to ask of me not to go there every day. And so, I only go often. 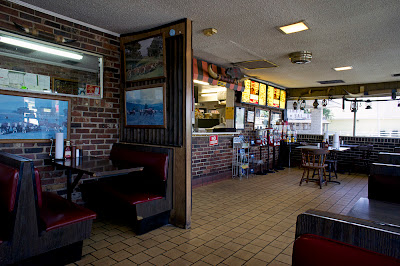 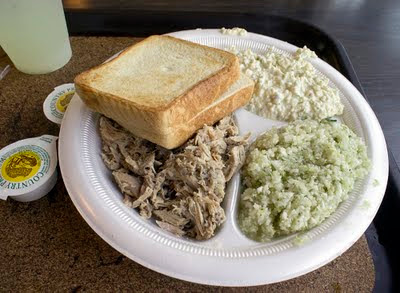 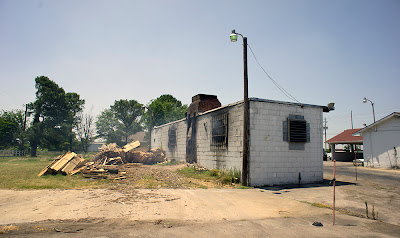