Frequent guests at the Today Show, winner of the 2004 Jack Daniels World Champion Barbeque Contest, Grand Champion of the 2011 Memphis in May Festival World Championship Barbecue Cooking Contest, numerous first places in National BBQ Association competitions for their sauces … Big Bob Gibson Bar-B-Q in Decatur is an Alabama institution since 1925, and we are all very proud of the big success with all the medals, championships, national recognition and so on.
But is it the best BBQ in the World, as they claim on their website? Well, let’s see first if they can hold their ground against other places here in the BBQ heartland of Northern Alabama, before we let them venture out to conquer this planet.
The main restaurant in Decatur – they also have a satellite restaurant in North Carolina and another one in Decatur – is situated smack in the middle of town on US Highway 31.
It is a big, full service restaurant, and no matter when you go there, the parking lot is always at least half full. The interior is dominated by all the plaques, certificates, and medals they won over the years, and the entrance area hosts three or four humongous metal trophies made out of grill parts. The atmosphere is like in those sports-bar/family chain joints, only that there is only one big room where everybody sits.
The meals are served on plastic plates with actual metal silverware, which is quite appropriate for a place like this. They even have crayons and coloring sheets for the little ones. Needless to say that the service is efficient and the cleanliness of the whole place is impeccable.
Contrary to my typical behavior, I combined the usual pulled pork with beef brisket this time, but, of course, had sides of slaw and potato salad. At about ten bucks with a drink, the amount of food was quite satisfactorily.
But then, a few questions arose …
The first question was – what is the brisket and what is the pork? It looked all the same but fortunately the taste was different, at least somewhat, so eventually, after some trial and error, I was able to tell it apart.
Then the second question arose - can meat be fatty and dry at the same time? Go there and find out for yourself. You will be astonished what all is possible.
Although the taste was not bad, my stomach did not agree with the rather low quality of the meat at all. It felt as if I had eaten millstones.
Next question – are the sides as important as the meat? Well, I really do not wish to discuss the sides here, the memory is too painful. The slaw tasted like raw cabbage without any spices or vinegar or anything on it, and the potato salad tasted like it was scraped off the bottom of a bowl that had been forgotten in the fridge for quite some time.
Final question – are the sauces really world championship caliber? Yes, they are surely top notch, but they also have ingredients lists as long as the Old Testament. Not quite your home made, organic, one-of-a-kind-taste stuff, but more like the industrial grade sauces you can order at Amazon or buy at the next Supermarket.
Their championship red sauce is tangy, not especially spicy, but kind of fruity and with just a hint of sweetness. The white sauce is very peppery and sour and also quite spicy, but without being really hot. Both sauces are very much agreeable to the mainstream audience, and in this area they are certainly at the top of the crop.
But can that be all – to win laurels for the sauces and rest on them, while neglecting all the other things that belong to a good BBQ?
I think not. While I certainly would pack some bottles of their sauces as gifts if I travelled to other parts of the Country, or even the World, there are numerous BBQ places here in Northern Alabama where you will get better food overall. They just don’t have the medals and trophies to prove that. 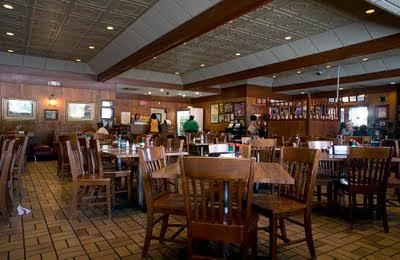 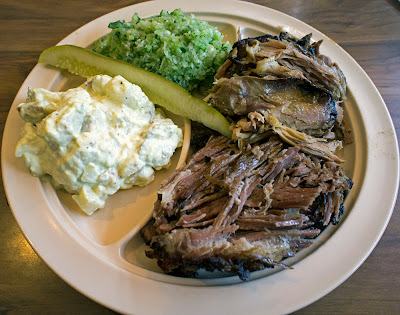