New Market is a small rural community in Northern Alabama. They grow cotton and corn there, you’ll find the occasional cattle on the meadows in the surrounding area, and the prevalent tranquility is only gently disturbed by County Highway 69, which runs through the town.
Since January 30, 1966, their claim to fame has been the lowest recorded temperature in Alabama ever, -27 F.
But for about six years now, there is a different reason to look up where to find New Market. In the middle of town, right on County Highway 69, under a big old tree, with a plaster pig on the lawn, there sits Ole Hickory Barbecue.
It is run by a former research chef for a major fast food chain, who was lured by the prospect of doing some real southern style cookin’ for folks who really appreciate good food from Boston to this rather obscure place near the Tennessee border.
The restaurant oozes the charm of a country store – you will find forks, sauce bottles, and napkins in an old wooden cupboard next to the soda machine. The decoration is predominantly figurines of chickens and roosters, some pictures with country scenes, a tiny TV in one corner of the room, and they have a small bouquet of plastic flowers on every table. Wooden furniture complements the plain country atmosphere, and the people there are very friendly and courteous, and they also keep the place spotless - which is always nice when you eat food somewhere.
The food is served on Styrofoam plates with plastic forks (I could not detect any knifes or spoons around there … ),, and with disposable plastic cups for your sweet tea or soda.
When you are finished with the meal, you are supposed to dump all that into a big trash can by the exit. Well, I guess it’s necessary to keep the overall costs down, but this is certainly not bringing them any additional style points.
As usual, I had the large pork plate. It comes with slaw, potato salad, baked beans, and a roll by default, and I did not see any reason to alter that.
The outstanding item here is clearly the slaw – vinegary but not sour, with a really nice aromatic flavor. Actually, vinegar is quite the dominant theme at Ole Hickory Barbecue.
The meat comes dowsed in their original vinegar sauce, which is not a bad sauce by any means, but I would prefer to decide myself which sauce and how much to pour on my pork, thank you very much. It is quite unusual for Northern Alabama to have your BBQ meat prepared this way, but I guess a bit leniency is in order here, because the cook comes from Boston, which is not quite the BBQ capital of the world.
The pulled pork is very tender and succulent, but I missed the typical smoky flavor – it tasted rather neutral to me. Well, at least the few un-drenched pieces I could pick out of sauce were that way.
But with the vinegar sauce on it, it is actually quite good. Of course, if you like it sweet rather than sour, you probably won’t go there very often. Even their so called sweet sauce is just a less sour variant of the vinegar sauce. I guess, some ketchup could balance it with a little sweetness, but since I really like sour stuff that was not an option to pursue.
I would have expected that also the potato salad would be more on the sour side, since everything else is, but actually it was quite bland and unspectacular. And the baked beans had a kind of very sweet, cinnamon like taste, which adds a much needed counterpart to all the vinegary sourness that prevails with the rest of the food.
All in all, the Ole Hickory Barbecue is a good example of the variety in BBQ you will find here in Northern Alabama. Their obsession with vinegar is a nice change of pace, and I really liked their food. But my next BBQ will probably be one where they have a really sweet sauce. If you like sour, by any means, go there. Or go to their satellite station in Huntsville, if you don’t want to drive to this out-of-the-way place just to get your vinegar fix. But you will miss a really nice place with style and charm that you usually don’t find in a big town. Not to mention the plaster pig on the lawn. 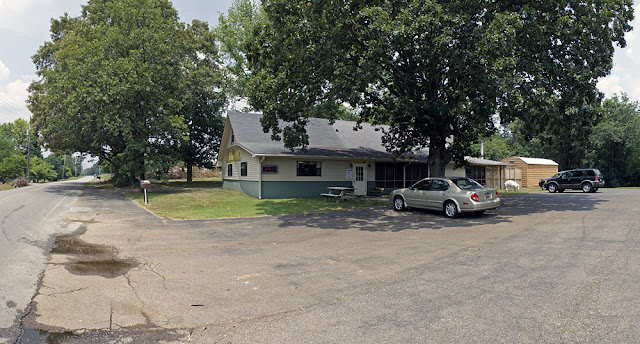 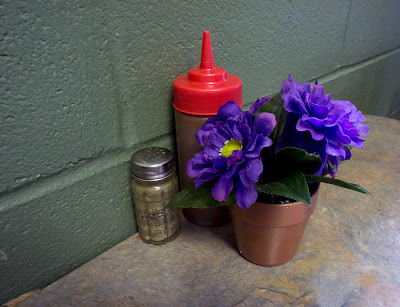 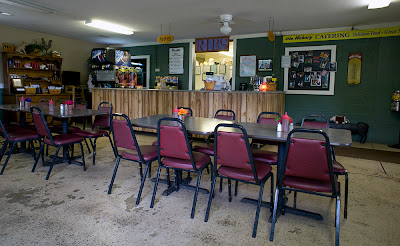 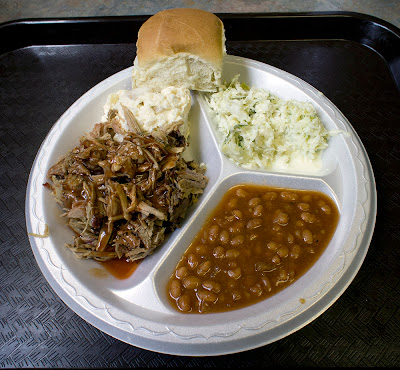