The Captain & Tennille, John & Yoko, Bonny & Clyde, Jake & Elliot, Bush & Cheney – those are partnerships everybody knows. In the culinary world, there are usually only lone wolfs, jealously guarding their precious recipes and trusting nobody with the preparation of the works of art they put on the menu.
And with BBQ, there is no real difference. It’s like in those country songs – you can take my car, my house, my job, my wife, but if you try to steal the recipe to my secret miracle rub, my killer sauce, my mother’s cole slaw, all hell will break loose.

But in Trinity there is a BBQ place where two pals are collaborating to make a righteous cue. Their very neat, clean and homey little shack is located directly on Highway 24. They have decorated the inside with all kinds of nice memorabilia, like an old gas pump, and some pig-related things. Half a dozen tables or so provide seating space for about fifteen people. There is a small porch with a few extra tables under parasols, and a drive through window. Speaking of driving, you better approach the building very slow, because the driveway is just a patch of heavily potholed gravel. But the friendliness and attentiveness of the staff makes you forget the aching shocks on your car as soon as you set foot in the restaurant.

The menu has all the usual items you expect for a complete BBQ experience. As usual, I stayed with the pork plate, with potato salad and baked beans – slaw and a bread roll, as well as a pickle spear come with it by default. Additionally to the default mild vinegar sauce that came with the meal, I had the choice between the hot vinegar sauce, the thick red sauce, and the white sauce. In a stupid attempt to appear modest, I only chose the thick red sauce – I should have taken the offer to take the hot vinegar sauce as well.

Well, the mild vinegar sauce is just what the name says – a mild vinegar-pepper sauce, which is more on the sour side than in the peppery corner. Nothing special here, but it goes very well with the pulled pork, as it should. The thick red sauce is also nothing earth shattering, just your basic Kansas City style concoction.
With really well done pulled pork, a simple vinegar-pepper sauce is all you need as a ticket to BBQ heaven. And that is absolutely the case for Chief & Snoogie’s pork – very tender and lean, yet still succulent and with a very prominent hickory flavor. Those guys apparently know what they are doing.
So, while the pork was just exceptional, the sides on the other hand where a mixed bag.
The slaw was finely chopped and very crisp, with a vinegar sauce that made it very sour – just the way I like it. The potato salad came in a creamy sour crème dressing, which gave it a more neutral, but also a more fresh taste as with mayonnaise. It could use a bit more salt and pepper to make it really pop, though.
The beans on the other hand were just beyond salvation. Those beans were so sweet that they could have served them as dessert. I did not taste cinnamon in there, but that is quite understandable, because the sweetness completely overlaid any other flavor that might have been in there. Next time I am having a bag of chips instead.

Yes, there will be a next time. The pulled pork was just too exquisite to not return. And for just under eleven bucks with a sweet tea, the large pork plate is a big heap of food. So, if quality and quantity and price are right, we have a winner. Or, in this case, two of them. 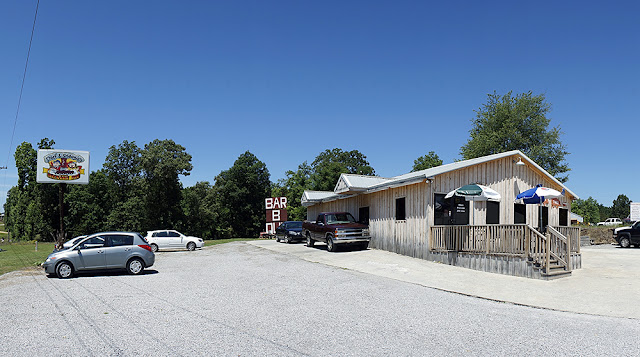 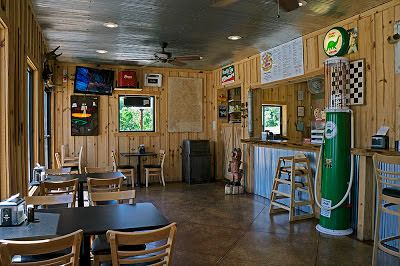 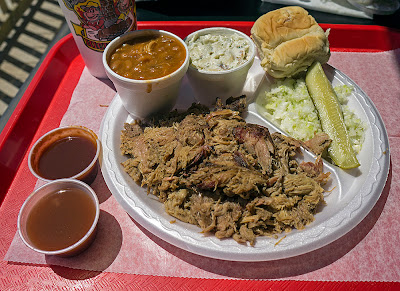