What’s so great about the South is that you still find those old fashioned family businesses that are handed down from generation to generation. The pressure by those ubiquitous national chains, especially in the restaurant business, has certainly been relentless over the past few decades. But since the folks in the South are very traditional and keep loyal to something once they decided to like it, small family restaurants can still survive here. That is especially true for the area of BBQ restaurants, where the biggest competition comes from a few regional chains – no real national challenger is in sight yet. And when you drive through the South, it may occur to you that each county, each bigger city, each valley usually has their favorite BBQ place. Just ask the locals, they know what’s good.

Since 1949, Johnny’s Bar-B-Q in Cullman seems to be such an institution. The have won several prizes for their BBQ and are especially proud of the home made sauce.
The restaurant is owned by the same family since 1963, so they have reason to celebrate this year. The building is clearly of that vintage, and that is no reason for celebration. From the outside, it looks quite unassuming and dreary, and the inside looks, well, like a dungeon. It is dark as the devil’s soul in there, and without the modern flat screen TV in one corner providing a dim light, you probably won’t be able to even read the menu. Of course, I am exaggerating here, but not by much. The interior could use a serious overhaul, starting with the lighting. The rest is your standard red-faux-leather booths, metal-with-faux-red-leather chairs, with space for about forty people in the dining room, with an adjacent room for even more people, some BBQ related decoration at the walls, and a big rack with bags of chips in one corner.

So, the interior design oozes the charm of the early 1960s, which can be taken as old style, or as just plain old. But at least the food is fresh there.
Because I was very hungry, coming from a baseball game in Birmingham where I was so busy taking photographs that I didn’t find the chance to eat even a hot dog, I ordered the BBQ plate with double meat. You do not have the choice of sides, it is served with French Fries, Cole Slaw, & BBQ Beans. Oh, well, no potato salad, bummer.
When the plate came, I was shocked. The fries were piled on top of the pork, and the pork was drenched in BBQ sauce. What the heck?! Why can’t you let me decide whether I want sauce over my meat? Do you have something to hide? Does your pork taste like cardboard? I had to find out.
After I carefully removed about half of the fries from the pork, I was finally able to find a spot that had no sauce on it. One bite and I knew what was going on – the pork was tender, with a nice pink ring, and with a very pronounced smoke flavor, although rather dry. Without sauce, it might not have gone down as smoothly.
The sauce itself was a somewhat strange conglomerate of tastes. It reminded me of the sweet-and-sour sauce of your typical Chinese buffet, but then a healthy dose of peppery spiciness kicked in. Together with the very smoky flavor of the meat, it was a delightful experience.
The same can be said about the slaw, which came in a sour crème dressing with a good crunch. The flavor had a hint of spiciness, and I could imagine this slaw on pork sandwich very well – and actually, that is how they do pork sandwiches at Johnny’s.
The BBQ beans on the other hand rank a few notches below, being of the you-can-as-well-use-a-can variety. And I still consider fries with a BBQ plate as offensive to my (acquired) southern pride. I would rather eat just plain white bread instead, and thankfully that is what they serve as an additional side item.

For all this, plus an endless refill of Sweet tea, I paid just over fifteen bucks. No really cheap, but taking into consideration how much food was involved here actually, this still is a good deal. Especially when not only the quantity is satisfying, but also the quality of the food is generally top notch. So, I am looking forward to the next fifty years of Johnny’s Bar-B-Q in Cullman, Alabama. 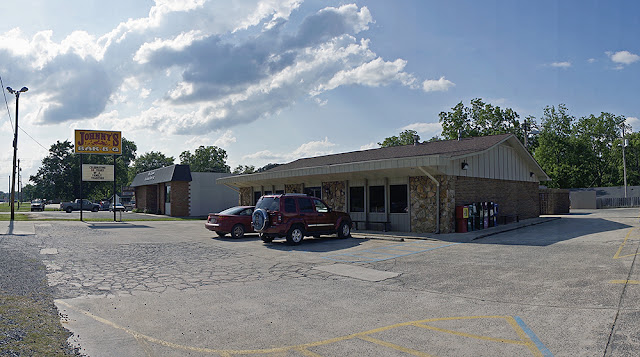 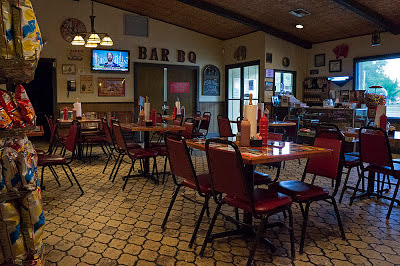 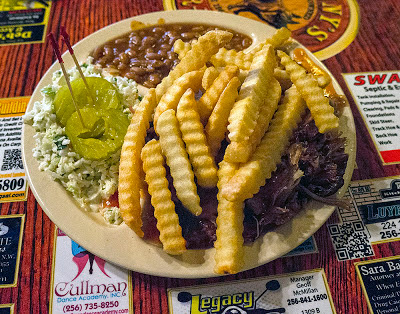