Cartersville in North Georgia is not far away from either the Tennessee or the Alabama border. This should guarantee at least a loose relationship with the great BBQ tradition of those fine two states. Of course, one sample at a restaurant that belongs to a small local chain is by no means a representative sample. So before I pass any judgment on the quality of BBQ in this particular area of the Southeast, there need to be a more dedicated test series. Well, I plan to be in Atlanta again to see the Braves, and the shortest route from my home leads me through this part of Georgia. Up until I get the chance to try at least a couple of other places there, I won’t generalize my experience today. Just trying to be fair.

Slope’s BBQ is a small chain in North Georgia, with now four restaurants there. I had the dubious honor to be one of the last guests in their fifth place, in Cartersville, because four days later they would turn off the lights there for good. Suffice to say that the world is not expected to miss a turn when that happens. The food there was not especially bad, nor was it really good, it was merely acceptable.
Because of the close proximity to their closing date they had only a limited choice of items still to offer. No ribs, no potato salad, and no anything fried. So I ended up with a pork plate with BBQ beans and Mac’n’Cheese.
Did I ever mention that I absolutely hate it when they put the sauce on the meat before they serve it to you? I guess, I vented about this once or twice already. Usually it is to cover up a mediocre meat, and here it was clearly the case. I was able to salvage a couple of bites from the sauce-less bottom of the pork pile, so I can say that there was no distinct smoke aroma whatsoever. Moreover, the pork lacked tenderness, and was downright chewy. The sauce also could not convince me. It was a light orange concoction of undefined sweetness with some hint of pepper to it. There was a separate second sauce with basically the same aroma, but a little more kick to it, which was more agreeable to me. But still, not really good, only slightly better than the mild variety.
And then the sides - can you say can? The beans were bland and kind of tasteless, and the Mac’n’Cheese too. But at least the toast was quite good and the staff was real nice.

So, quite frankly, had I to judge North Georgia BBQ by only this one experience, the verdict would be clear and not very favorable. But let’s give the area a chance to redeem itself on my next tour to see the Braves in Atlanta. From what I heard, there should be better places in Cartersville and Rome. I hope so. 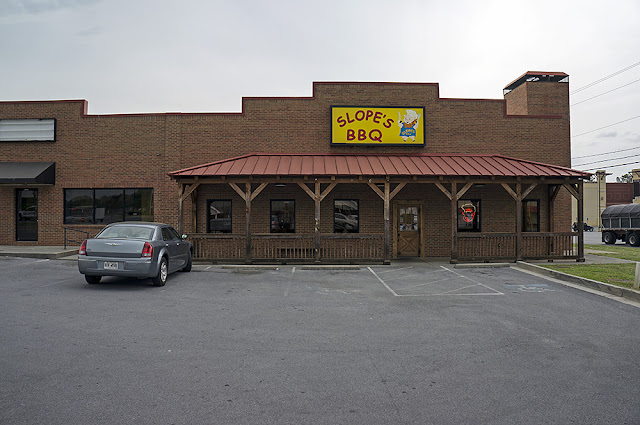 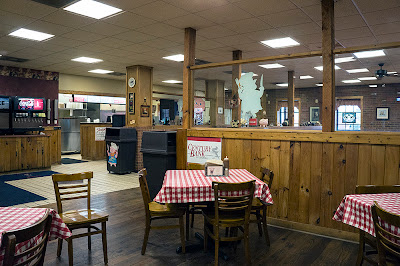 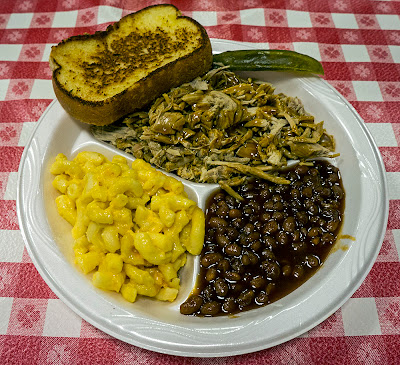