In my mind, there is one cardinal sin when it comes to BBQ that I really cannot tolerate – pork that comes with the sauce already poured over it. Why do people do that? Let me decide for myself, which sauce and how much of it I put on my meat, please. Are you just merely trying to cover up the mediocre taste of your meat with it, or are you so confident that everybody will be just blown away by the awesomeness of your sauce, so that nobody objects to it being on the pork in the first place? What the heck is wrong with you?

Well, at Pruett’s in Gadsden, they do it this way, too. Fortunately, the meat was not flooded with sauce, so I could actually pull some chunks of the pure pork out of it. And what do you know – it was tender and lean, and the taste was quite exquisite, with a wonderful smoke aroma that still let the pork flavor co-exist besides it. So, no reason for a cover-up here. And actually, the sauce they put over it was extremely good, as well. A red concoction with the consistency of honey, with some vinegar induced sourness, a bit of a peppery bite, and a tiny hint of sweetness, it had such a well rounded flavor that I put it on the toast that came with the pork plate, after I was finished with the meat.
And had I had any potato salad left by that time, I would have poured the sauce over it as well. Not that the salad needed any more flavor – it was nearly perfect as it came. With a mayonnaise based sauce, and more on the sour side of the aroma scale, it tasted fresh and very delicious.
But, as with so many things, it was not all happiness and sunshine and smiles and high-fives with the meal. Yes, the toast that came with it was also very good, especially with the BBQ sauce on. But the slaw was basically a bust. Of the dreaded flat-tasting sweet’n’sour variety, I only took one bite and that was it. No reason to spoil the exquisite experience I had with the rest of meal.
And for just about twelve bucks with a cup of sweat tea, it was a fair deal, too.
As for the atmosphere in the restaurant, it is kind of special. There is just one big dining room which has space for about fifty people or more, and the tables are kind of close together, so when the room is full of people it makes for a fairly noisy ambiance. They have a sign at the counter in front of the drink station that says “Sweat tea – The Wine of the South”, which I find quite charming. Also, the staff is very nice and attentive and although there is a flat screen TV in one corner, the rest of the room is decorated with a nice assortment of Alabama and BBQ related stuff.

All in all, despite this really annoying practice of putting sauce on the meat before serving it, and the disappointing slaw, I know now where to have my BBQ when I am in the Gadsden area. And I even would take the slight detour to get there, when I am on my way to Atlanta again. 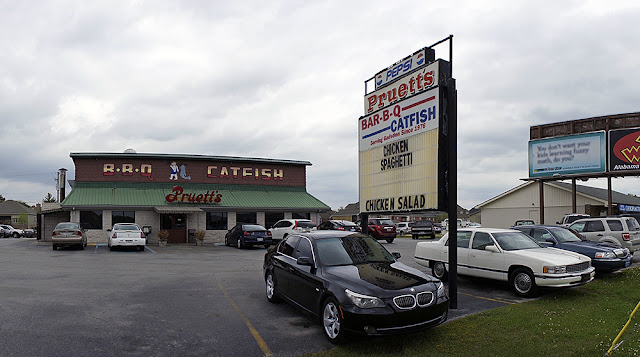 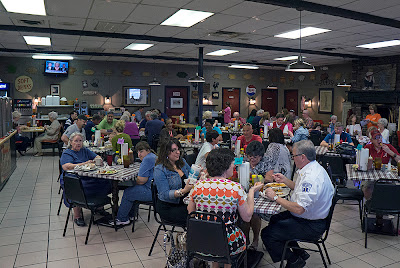 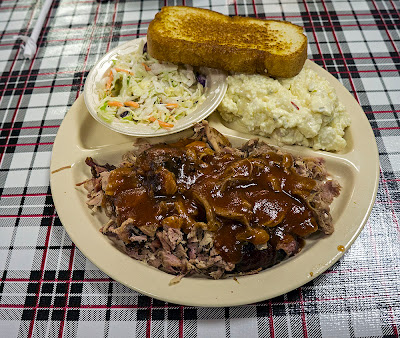 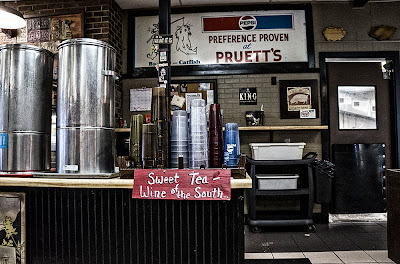