Columbia is known as the Mule capital of the World. Well, perhaps the World as seen through the eyes of a Tennessee Mule owner. But nevertheless, I was able to verify that they indeed have many Mules in and around Columbia – especially during their week long Mule days each spring. During my travels through the South, I came across many of those festivals, and at most they even sell food-samples of the thing that made them the self-proclaimed capital of the World of that thing. But while I didn’t mind to try Rattlesnake in Opp, or Chicken in Moulton, I tried pork, not Mule, in Columbia.

And what can I say – the pork was good. Really good, actually, top notch with all the fixins’.
Nolens Barbecue resides in a small building, next to an insurance company, on the main road smack in the middle of Columbia. While the exterior is very unassuming and sober, the inside is quite charming, with yellow walls, some pig memorabilia, and five small tables with fourteen seats altogether. You can have pork by the pound, and some humongous thing called the party platter for about seventy-five bucks. I chose the pork plate, as usual, with cole slaw and potato salad – which I didn’t get because the lady behind the counter mixed my order up and gave me baked beans instead.
Never mind, the beans were excellent, so I didn’t complain. Savory and very non-sweet, with a lot of meat in it, as baked beans should be.
The cole slaw, too, was superb, with a fresh crunchiness and just the right amount of vinegar, salt and pepper so that the cabbage aroma was still there. Here too, no trace of any sweetness.
The meal came with two thick slices of warm cornbread, which was moist and succulent, and absolutely non-sweet.
And then the pork – nice pink ring, tender and lean, with a wonderful smoky aroma, crunchy bark … almost perfect. Almost, because it was a bit on the dry side. But actually I kind of like it that way, because dry pork usually soaks up the sauce better. And the sauce was also very, very good. Nothing special, just a medium spicy conglomerate of vinegar, peppers, salt, and something that gave it a semi-thick orange consistency. But it perfectly complemented the aroma of the pork.
All in all, I must say that this was one of the best BBQ outside of North Alabama I ever had. And for not even nine bucks, including a sweet tea, it was a lot of meat, too.
And while I was so hungry that I could have eaten a horse after my visit to the Mule days spectacularities, I was glad that they had pork at Nolens Barbecue. I really like Mules – only not on my dinner plate. 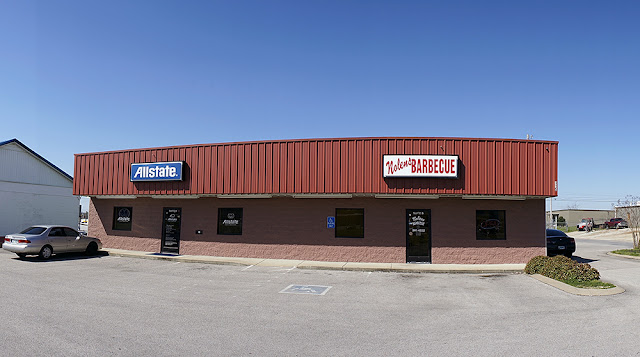 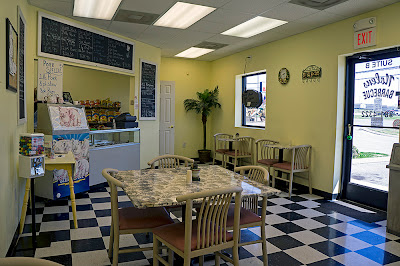 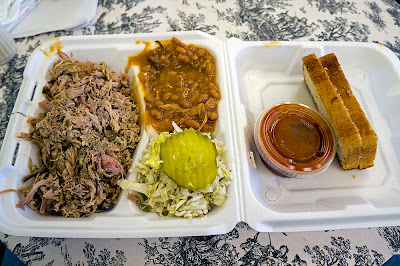