Opening a BBQ place of your own is the dream of every backyard pit master. Very often, it is the sauce that everybody in the neighborhood just loves, which plants the seeds of the idea to go professional. Not a bad basis, but BBQ is more than that. If the meat is terrible, the best sauce in the world will not save the business. And what about the sides? Many of those restaurants of ex-backyard pit masters only concentrate on the meat and the sauce, and put rather pedestrian sides on the table.
And even worse, what can you expect from an ex-backyard pit master, who not only opened his own BBQ place, but then expanded the business into a franchise with about 70 locations in the Southeast, the Southwest, and the Northeast? Surely he had to cut corners, standardize the whole process, and rationalize the preparation of the food, so that it could be done with comparable quality everywhere.
That this does not necessarily mean adhering to the highest possible standards, but rather finding the least common denominator, should be self evident.

So, now Huntsville has been blessed with its own Shane’s Rib Shack. Hallelujah, just what we needed here to survive the BBQ shortage that plagued us all so terribly the last few decades.
It is located in a plaza with other eateries like Bonefish Grill, Subway’s, Nothing but Noodles, and Zoë’s Kitchen, so the local lunch crowd now also can have its BBQ cravings satisfied.
The fairly big inside of the restaurant is your typical sports-bar/family place, with wooden furniture and semi-booths dressed in red faux-leather.
You order at a counter in the back, put the sign with a number on your table and after a short while your meal is brought to you. The staff is very friendly and attentive, and the place is spotless clean.
The decoration mostly consists of flat screen TVs on the walls, and some framed football shirts. It was kind of odd to see a Raider’s shirt there, and no trace of a Tide or Auburn shirt, or maybe one from the Atlanta Falcons. The Raiders, really?! Not a team known for its success lately, like, oh well, some Alabama football teams. Just saying.
But it is surely a place you can go eat with the kids; they even have four different kid’s menu items.

Although the name of the name implies that they see their ribs as the main attraction, I refrained from that and had the pork plate instead, with baked beans and fries. They don’t have potato salad on the menu and I didn’t want to have chips or mac’n’cheese, and from the picture on the big menu behind the counter, the cole slaw did not look very special to me, so I deviated from what I usually order.
Big mistake, I should have taken something else. The fries were too salty, almost borderline inedible, and the baked beans were of the sweeter-than-sweet variety, and I could swear that I had very similar beans once out of a can from a supermarket.
The meat was very tender and lean, but a bit dry and with just a slight smoke flavor. Not bad, but I had better. The "Original" sauce, on the other hand, is a killer. Vinegar, tomato and pepper, with a hint of mustard, a little sweetness to it – I ate it on the toast when I was through with the meat.
But is that enough to justify a thumbs-up for this place? Well, it will find its fans, and since it is relatively kids friendly, my guess is that it will be there for a while. And what the heck, should I be ever in this part of town when a sudden BBQ craving overwhelms me, and my gas tank would only allow me to travel another mile or so, I would probably go there again. But instead of the two sides that come with each plate, I would order two additional slices of bread – for the sauce. 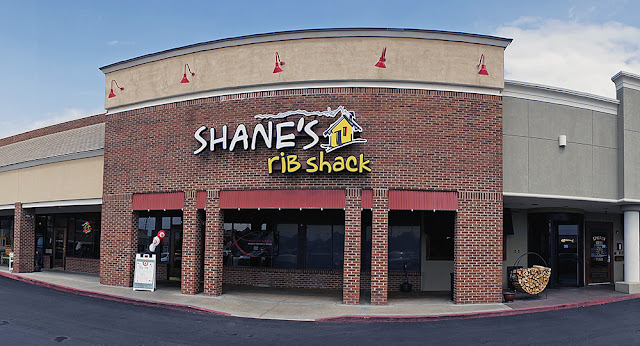 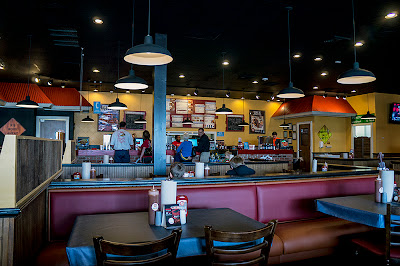 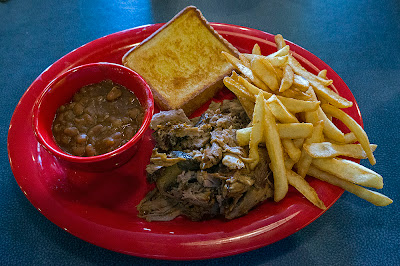