Yes, THAT Lynchburg. Whiskeytown USA. The Hollow. Gentleman Jack. Old No 7.
In downtown Lynchburg, on a little square around the Moore County Court House, with its dozen or so stores, the BBQ Caboose Café is located at the south-western corner of this tourist trap-like assembly of places to buy Jack Daniel’s memorabilia and paraphernalia.

The BBQ Caboose Café, however, is virtually a Jack Daniel’s free zone – at least I could not detect one thing in black and silver there. It is decorated heavily with autographed pictures of celebrities on the walls, lots of train and railroad related items, weird signs and other stuff, so it is easy to miss things in this smorgasbord of colors, shapes and styles. On the ceiling, they have fixed numerous sheets with names and comments of people who have dined there before. There are four of five small booths on one wall, but the main dining room has just three or four long tables with chairs. And there is also a small platform next to the entrance, where they play live music regularly. The owner and his wife have recorded some records, which they of course sell in the Caboose, too.

So, the atmosphere is quite unique and really charming, despite the considerable clutter on the walls and on the ceiling.
And this extends to the menu as well. Besides a BBQ (pork) sandwich and a BBQ (pork) platter, they also have BBQ Pizza, Jambalaya, Hot Dogs and the like to offer. Service is friendly and competent, and my BBQ platter with potato salad and slaw arrived in record time.
Well, fast delivery is not necessarily a bad sign, even in a BBQ joint where by definition everything should be done in a more relaxed and slow manner. But in this case, it fit the product they are serving – I would classify this not as BBQ, but as FFQ … Fast Food Q.
The pork was way too dry, and although it had some smoky flavor to it, I could not really identify whether that came from a pit or from some artificial flavoring agent. The potato salad was very comparable with something you might get at the next supermarket, and the slaw was, apart from a hint of sweetness, without any taste whatsoever.
They have two different sauces, both thick red concoctions of the “Original Memphis BBQ” variety you can also find at the next supermarket. One was supposedly to be mild, the other hot. I could not spot a big difference, and poured one or the other on the meat indiscriminately to give it sufficient moisture for swallowing it down.

For about thirteen bucks, I had way better BBQ before – sometimes in shack-like places without all the fancy trimmings of the BBQ Caboose Café. This place is apparently geared towards the tourist crowd that visits the Jack Daniel’s distillery two blocks further down the road, so that the visitor from New York can boast at home that they had original southern BBQ. Yeah, let them believe that. We know better, right? 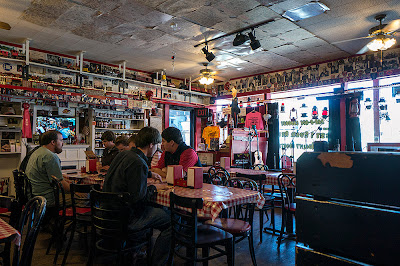 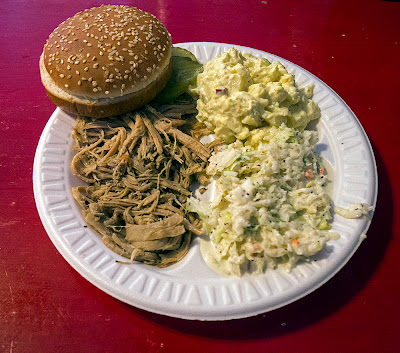