Nash BBQ on the Beltline


“You had the rest, now try the best”.
Proud words that they have on their web site. To make a long story short, yes, I had the rest, and quite many of them are better than Nash BBQ on the Beltline in Decatur. In fact, Nash ranks in close proximity to the very bottom of the list of places I’ve visited so far.
Well, they also claim – on their web site again - that “Hickory smoked BBQ is our specialty” and that they are “still using the same recipes that have been passed down from generation to generation”.
I’d say making bold claims is their real area of expertise.
Hickory smoked … yeah, right. My question would be what they were smoking when they put this on their web site. The meat, pulled pork, was as far removed from being hickory smoked, as I am from winning a Nobel Prize. It tasted very sour, which probably came from the fact that it was drenched in some kind of vinegar-pepper marinade. Even the strongest hickory aroma could not survive that kind of treatment. And quite frankly, I immediately thought “slow cooked” after the first few bites. It was very tender, reasonably lean, and not too mushy, but it certainly lacked every other quality I think an expertly smoked piece of meat should possess.
So, the first and foremost feature of the pork was its sourness, which was then even kicked up a notch through the vinegar-pepper sauce that came in a little cup on the side, and which I foolishly poured over the meat without tasting it first.
That the cole slaw reminded me of a heap of shredded glass that was lying in a puddle of water is not really important here. Looks can be deceiving and actually the relative sweetness of the slaw was a nice counterpart to that vinegar orgy my pork had become. Without that, judged by itself, I fear my appreciation of this particular type of slaw would be less enthusiastic.
Which can be said without any hesitation of the potato salad – it was one of the sorriest excuses to slice a potato in a long time. Can you say “out of a can” …?! Apparently, the folks at Nash can.
Complementing this array of substandard parts was two slices of plain white toast, neatly wrapped in butcher paper.
For all that glorious failure, I paid a little over nine bucks, with a drink. Well, at least the iced tea was freshly brewed and not too sweet.
Oh, I almost forgot – the atmosphere of this place is … special. Nine tables, brown and green checkered linoleum floor, empty walls except for two tiny flat screen TVs and a black board with leaflets on it. That’s it. Frugal. Sober. Boring. Like a freakin’ Hospital cafeteria. But the folks working in there were very friendly and that reconciled me a bit with the rest of my dining experience. “Come again”, were the parting words from the kitchen, when I left. Fat chance. And I would also not recommend betting the farm on me visiting the two other locations of Nash BBQ in Decatur and Hillsboro. 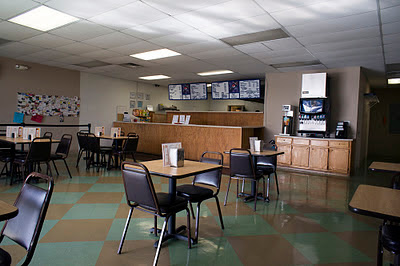 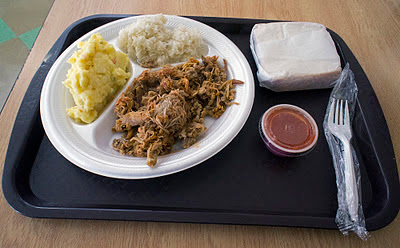