Seventeen Dollars for a BBQ lunch is a bit unusual. Even more so, if the place does not really qualify as a fancy-schmanzy gourmet temple, or does not have yet reached national celebrity status, like some other place in Decatur. No, the rusting, man-high rooster on the bottom of the sign-pole in front of the building, plus some kind of a flying pig on the sign that says “The Bar-B-Q Smoke House” surely indicates a more down to earth eating experience.
Well, down to earth is the level of comfort when you leave this Smoke House, dragging your full belly behind you after trying in vain to leave a clean three-meat combo plate with all the fixin’s – you get a lot, and I really do mean A LOT of food for seventeen bucks. I thought I was hungry enough to master this challenge, but had to admit defeat eventually.
So, what you get when you order the three meat combo plate is three meats (pork or beef, ½ chicken, ribs), slaw, beans, two slices of Texas toast, and a basket full of potato wedges.
Since I am not a big fan of chicken (too much work involved in ripping the meat off the bones – I am not here to practice my hand-eye coordination, but to dig in …), I told the very nice lady behind the counter, just give me more pork instead of the bird.
The pork was actually very nicely smoked, with a fine but distinctive smoke aroma, although it was a bit too dry for my taste. It was very tender and the size of the pulled bites was just perfect. They give you four sauces with the plate, two for the pork and two especially for the ribs. The mild pork sauce is very flavorful, with a rich (apple cider?) vinegar body. The hot variety is the same basic stuff, just with some peppers added. Both sauces do complement the pork perfectly.
The rib sauces are thicker, with a bit more sweetness to them. Also here, the hot sauce is a spiced up variety of the mild sauce. Again, both go very well with the ribs, but I also used them on the pork – with no apparent damage to my health. They also have a white sauce in their repertoire, but since I did not want the chicken, I also did not get the white sauce – tough luck.
My thought on the ribs is that their quality was not even in the same ballpark with the pork. They were kind of pale, and although the taste was actually very good, I prefer a good crust and red meat. There was a lot of real tender meat on them, but the apparent lack of a dry rub to give them a bit more kick was a small disappointment.
The sides, on the other hand, were excellent.
Especially the potato wedges were a revelation. They came fresh out of the oven, with an herb crust on them that was just wonderful. The barbeque beans were very good, as well, without the ubiquitous cinnamon, but with a very nice rounded sweet flavor. The slaw looked kind of funky, being more brownish than the usual green/white color, but it tasted very good and I guess here too the apple cider vinegar was used.
I did not really care that much for the Texas toast, which was kind of dry and uninspired.

On the other hand, the atmosphere in this place is very inspiring. They have only a handful of tables to sit in there, but each table has a nice view at the proceedings on the Point Mallard Parkway that runs directly in front of parking lot.
The furniture is wooden tables on poles with laminated regional advertisements on top of it, and metal tube chairs. No booths, no plastic, no fake fanciness.
There is a constant coming and going, and most customers are greeted with their names, and also seem to know each other, too. I guess that not many tourists like me, from, say, Madison or Limestone Counties, ever find their way to this little jewel of southern cuisine and southern hospitality in Decatur. But if you are really hungry and want to fill your belly with real quality southern food, you should maybe consider an expedition to the Smoke House once in a while – you will be rewarded richly for your boldness. 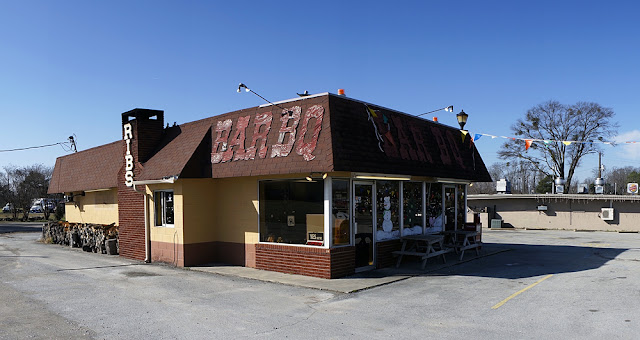 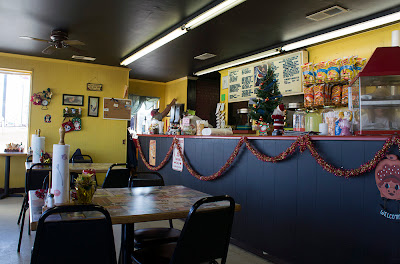 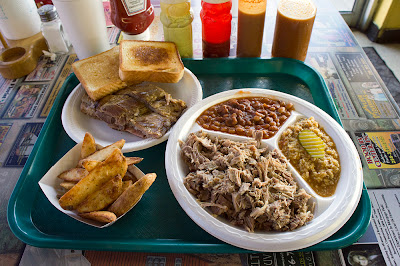