Houston, Bush International Airport, Texas
During my occasional travels, I try to sample BBQ at those near and far away places outside the Quest area. I just really, really like that stuff ...
Seriously, what can you expect from airport food? Exactly.
But since it was there, I just had to try it. Good thing they have all kinds of other restaurants there at Bush International Airport in Houston, Texas, because unfortunately my travel schedule for the next weeks will require that I eat there at least a few times between flights.
So, they have a Harlon’s Bar-B-Que counter there in one of the food courts in Terminal B. Hurrah.
Another Harlon’s is to be found in a Houston shopping mall, two others are in the city of Houston and one in a town called Nacogdoches, and they also sell pre-packaged meats in local supermarkets. Amazing.
Okay then, give me a two meat plate with sausage and beef, and please try not to sneeze on the meat while you preparing it, thank you so much for your consideration.
Well, of course there is no potato salad, we are in Texas here and those folks eat … Mac’n’Cheese with their BBQ?! What the heck, when in Houston … And also give me some green beans, I better counter the bacteria from your constant sneezing with some vitamins.
Yeah, I guess I’ll have a drink, medium un-sweet tea, please. Here you go, almost fifteen Dollars for you, a plate with two meats, cheesy noodles and boring vegetables, and a very generous helping of flu particles for me. Yippieh.
Since this place is in an airport food court, the atmosphere there is like you are sitting in an airport. Doh …
But at least it’s BBQ, right? Well, kind of, in a matter of speaking, you could probably refer to it as such, if you are very polite and don’t mess with Texas.
First of all, the meat came drenched with some kind of spicy ketchup. Great.
The sausage was fatty and tasted only spicy; no room for any real taste here, just the hot sensation of the spices.
Whereas the beef was very lean, but also kind of chewy and had an aroma not much unlike cardboard.
It came as a surprise to me, how good the Mac’n’Cheese actually tasted. Although I think the creaminess of it was more a product of it being under a heating lamp for hours than the actual cooking prowess of Mr. Kraft.
The green beans, on the other hand, which came with little pieces of red pepper, were really good – crunchy and very tasty. And I sure hope they had lots of vitamins to contribute to my body’s flu resistance forces.
So, now that my curiosity is satisfied, next time I am at the Houston airport, I can look out for some, hmm, … healthier … better … tastier food – even if it does not contain the magic three letters. 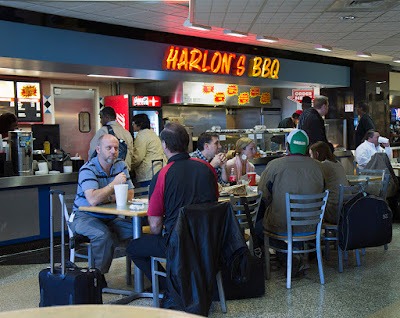 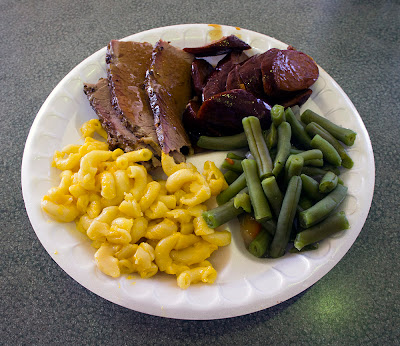