Las Cruces, New Mexico
During my occasional travels, I try to sample BBQ at those near and far away places outside the Quest area. I just really, really like that stuff ...
You probably wouldn’t go to any Mexican Restaurant here in Alabama expecting original south-of-the-border cuisine. And rightfully so - most places here serve a very much “Americanized” version of Tacos and Fajitas.
On the other hand, is the same true in reverse? Meaning, if you went to a BBQ place in one of the Border States to Mexico, shouldn’t you tone down your expectations some notches, too? By my own recent experience in two of those states, you would be well advised to do exactly that.
On a culinary map, New Mexico would probably feature prominently with Mexican/Tex-Mex food, and most likely steaks and anything beef related.
Real - that is southern style - BBQ is without any doubt not the cooking that would propel this beautiful state into the top regions of any “must-go-to-eat-there-places”-lists.
Granted, I only have a very limited sample size to base this judgment on right now, but the further west I go, the worse the BBQ seems to get.
In the preceding weeks, I had the opportunity to take Texas to the test, and while it was surely not too bad, it was also not really good.
Well, and now New Mexico - the metropolis of Las Cruces, to be exact.
The whole BBQ experience there really starts on the wrong foot, when a Google search spits out only half a dozen restaurants – which is pitiful by Bama standards, for a metro area with over two hundred thousand inhabitants.
And it gets even worse, when you drive to one of those addresses to discover that there is … nothing. That leaves five places, one of which is a Dickey’s chain restaurant, and I already had the opportunity to test this in Ft. Worth a couple of weeks ago and absolutely do not feel the need to go there again.
So, we are down to four now. Reading the critiques on the internet, one place seems to be at the top of the crop, and that is Rib Town BBQ.
Sure, it has changed hands a few times in recent years, also changing the name from Rib Cage to Rib Shack and now to Rib Town. But the BBQ part was always kept.
I guess, another thing that did not change is the small smoker in a chain-link-fence surrounded place next to the building. So, at least they theoretically know how to prepare the meat, and walking up to the place it sure smelled promising.
The red building has a sign in front of the entrance that says “Come in and Pig out” – nice touch, I like whimsical stuff like that.
The inside does not ooze exactly with southern charm, it is more reminiscent of one of those 50’s era soda parlors. All over the walls are scribblings and graffiti from satisfied customers, a few booths with red faux-leather are complimented by some simple tables with wood furniture. The atmosphere is very bright and friendly, which is reflected by the equally very friendly and warm manners of the staff.
So, I ordered the pork plate with slaw and potato salad, not really expecting much, since this was New Mexico and not New Hope, Alabama. And I would not be disappointed.
The meat was very soft and mushy, and by my account seriously overcooked. I can’t really tell how it tasted, because it came drenched in some kind of glorified-ketchup-with-spices sauce, and the sweet flavor of it just simply overpowered any other aroma the meat itself might have had.
The corn slaw – yes, corn, not cole – was a neutral tasting mayonnaisy concoction with some shredded cabbage and, yes, corn. But the kowtow to the south-western cuisine did not stop there. The potato salad had actual black olives in it.
Black Olives. Potato Salad. Two things never to be mixed together – yikes!
A piece of dry toast, and some pickles and onion pieces completed the plate.
For about twelve Dollars with un-sweet iced tea, it was not even that cheap. And quite frankly, I had much better BBQ for much less money elsewhere. But for Las Cruces, New Mexico, so far west from the heartbeat of the BBQ world, it was okay, I guess. Since I was the first Alabamian to visit this place, as the owner revealed in a little chit chat while we waited for the cook to prepare my plate, all the cheerful and supporting writings on the walls were no surprise to me. I tactfully refrained from adding what I thought to the flattery on display there, not wanting to upset anybody. We Alabamians are friendly folks – and we know what good BBQ is. 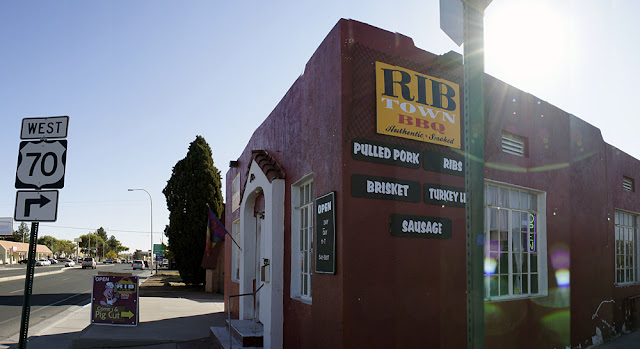 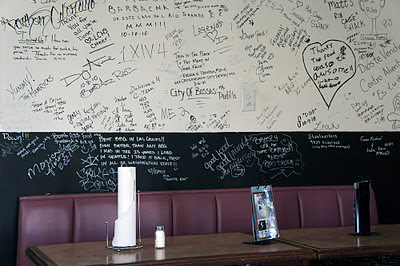 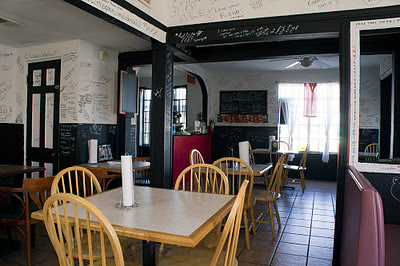 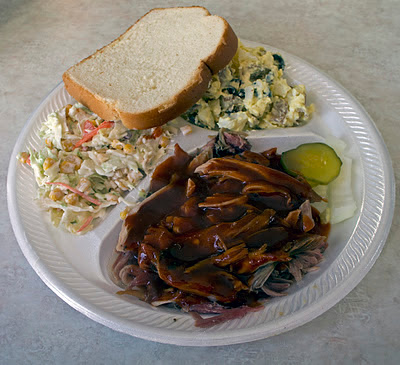 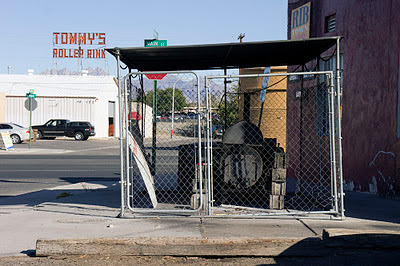