Arlington, Texas
During my occasional travels, I try to sample BBQ at those near and far away places outside the Quest area. I just really, really like that stuff ...

Dickey’s Barbecue Pit has started as a family business in Dallas, Texas, in 1941. Since then, they franchised their business model and today there are about 140 Dickey’s all over the United States. With the conspicuous exception of the States of Alabama and Tennessee. They are certainly successful, and also obviously wise enough than to test their luck here in the BBQ belt. And rightfully so, because they don’t hold a candle to even most of our more average BBQ places.
This is not to say that the food is bad at Dickey’s – not at all. But if you had the choice between a V8-Truck and a Smart … that’s what I mean. No contest. Game over. Move on. Get out of the way. Now.
The restaurant exterior and interior are strictly and clearly designed to appeal to the usual Sports-Bar/Family restaurant crowd. Nice wooden furniture, a few neon signs and antique looking photos on the walls, a couple of flat-screen-TVs in the corners, booths on the walls, tables in the middle, blue-and-white checkered table cloths, plastic plates and metal silverware. Standard issue American family restaurant equipment, no style points for authenticity here, that’s for sure.
And then there is the misleading name – Barbecue Pit. Laughable. They use gas powered smokers, which by my count is as far away from anything you could justifiably call “Barbecue Pit” as I am from being mistaken for Brad Pitt.
So, although the original place in Dallas still exists, and the franchise is also still owned by the original family, their restaurants aren’t exactly Mom-and-Pop-style joints, and they also cut some corners in other areas during their growth to national food chain. But how is the food now, actually?
Well, to find this out, I ordered the two meat plate – with pulled pork and polish sausage, and baked beans and a so called baked potato casserole on the side. And for good measure, and because it just happened to stand there so invitingly at the counter where you load your side on the plate, I also took a cup of apple cobbler. And good thing that I did, because that was definitely the high light of the whole meal.
First of all, the pork was not pulled. It was kind of cut into big chunks, which where not very tender and also contained a good bit of gristle and fat, while the meat around that was unbelievably dry. The taste was actually surprisingly acceptable, but after spitting the third chunk of gristle into a napkin, I really wasn’t in the mood to enjoy it any more. And it also didn’t help much that the pork was smothered with sweet sauce – vinegar and pepper to bring out the flavor, anybody? Goodness gracious.
The polish sausage on the other hand was real good – a little spicy, but that was complemented in a very nice manner by the thick red sweet barbecue sauce the carver at the counter had poured over it. Although the sausage was certainly not of the lean variety, taste and texture were really pleasant.
The baked beans on the other hand were just merely acceptable, and you can get the same quality out of almost every canned brand from the supermarket.
And then the baked potato casserole – what a grand name for mashed potatoes with bacon bits and cheese on top. It was kind of a tasteless concoction, only resembling anything flavorful when I happened to have bacon, potatoes and cheese together on the fork. Don’t those people (outside of Alabama and Tennessee) know what potato salad is? And cole slaw? Maybe it is good they apparently don’t – it would end in certain disaster anyway. So, Texas (and Florida and everybody else), stay with your potato casseroles and fries, and leave the real stuff to those people who can handle it.
As mentioned above, the apple cobbler was very good, not too sweet and without that dreadful cinnamon spice. Also, you get a free ice-cream cone with each meal, which is always a crowd pleaser. And for such a lot of food, including a large drink, the price of just over thirteen buckaroos is a very fair deal. But I would gladly have paid more to get decent pulled pork. And potato salad. 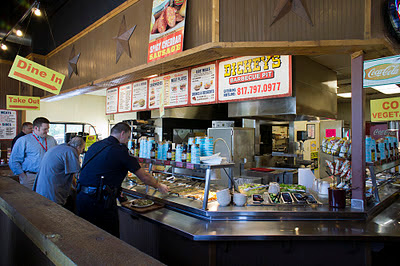 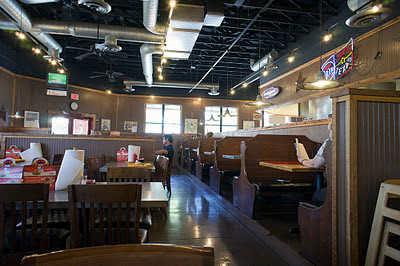 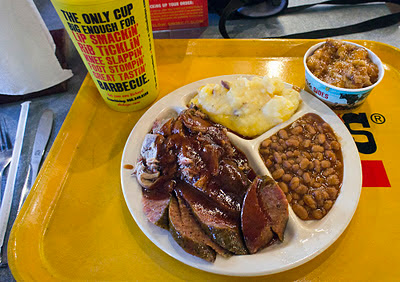